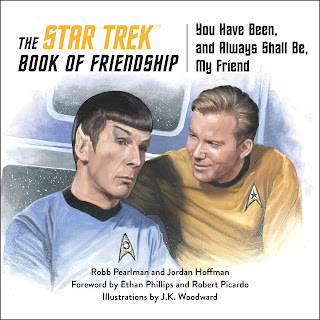 In its near 60-year history, Star Trek has entertained us with hundreds of stories. A lot of those stories were told on television and movie screens, but dedicated fans know that there are a myriad of other tales that exist solely on the page. The bookshelf of the final frontier is packed with novels, comic books, behind-the-scenes accounts, meditations on philosophy, both actor and character biographies, technical manuals, even fitness guides. Now, a new publication seeks to shed light on an area where no book has gone before: the friendships of Star Trek.

The Star Trek Book of Friendship is a unique volume in the long and storied history of Trek books because it features two friends casually exploring the relationships of the franchise. Over the course of 128 pages, authors Robb Pearlman and Jordan Hoffman discuss just about every relationship from the history of the property: Kirk and Spock, Picard and Riker, Data and La Forge, Janeway and Tuvok, Sisko and Kira, even the pets of the future are given attention. Characters from every series from TOS to Discovery are included, and even the Kelvin Timeline is represented and explored from a couple of different angles. When the conversation turns to the female relationships such as that between Beverly Crusher and Deanna Troi, our authors are joined by astrophysicist Erin MacDonald so that multiple perspectives are included. Many of the pages are adorned with the wonderful artwork of comics illustrator J.K. Woodward, who brings the characters to life with a painted style that captures their essence. Young Spock, Old Spock, even New Spock receives a faithful and accurate pictorial representation that instantly connects with the reader.

The introduction to the book is written by fan-favorite Voyager actors Robert Picardo (The Doctor) and Ethan Phillips (Neelix). The two set the tone for the book by taking playful jabs at each other, ensuring that this text feels like a conversation and not a formal study. We're sitting in on a chat between two life-long Trek fans, not scholars who seek to unravel the mysteries of the Ngame Nebula. "How many times did they face the threat of 'Oh no, Will Riker is going to get promoted?'" asks Jordan. "And don't forget about TNG's Season Seven's 'The Pegasus' when Riker is ordered to keep the prototype cloaking device a secret from Picard--you can see it destroying him," replies Robb. Readers may very well finish this book in a single sitting, but the conversation is absolutely chock-full of Trek knowledge and experience. These writers know their stuff, and long-time fans will feel like they're with old friends as they read--which is the whole point of the book: the friendships forged through Star Trek are the best friendships of all.

In that spirit, the book itself is designed for gift-giving. The first page features three blank lines for personalized inscription: "To", "From", and "Stardate." Even the size of the book--just over 6 inches square--has been designed for easy portability and gifting. The function is evident, and this volume is ideal for a birthday surprise, stuffing Christmas stockings, and as a physical symbol of solidarity and affection.

My Star Trek bookshelf is brimming with tomes, but there's nothing else quite like The Star Trek Book of Friendship. Whether they're analyzing the bond between Kirk and Bones (even the "Disco Bones" as seen in The Motion Picture) or pondering the unfathomable (are Picard and Q friends?), Robb Pearlman and Jordan Hoffman have crafted a fun and thoughtful expedition through the enduring relationships of one of our most beloved franchises.