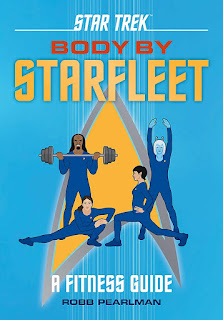 Cereal At Midnight recently had the opportunity to speak with author Robb Pearlman about his new book Body By Starfleet, a fitness guide that uses the worlds and characters of Star Trek to promote physical health!

C@M: Robb, thank you so much for speaking with us! Body By Starfleet combines physical fitness with the themes, characters, and ideals of Star Trek. Some readers may be surprised at how naturally these two topics fit together. What was the genesis of this project, and what led you to combine your love of Star Trek with personal fitness?

RP: A few years ago I decided to make a change in my life and go where I'd never gone before: they gym. I found a great local place, Tutela Training Systems, in Clark NJ. Though I was initially intimidated to even walk through the door, I quickly warmed to it as I realized that the other guys working out were not only of all different body types, backgrounds, and careers, but all completely supportive and encouraging of each other as we all strove toward our universal goals of fitness and health. If that doesn't embody Starfleet, I don't know what does.


C@M: You've written multiple books themed around Star Trek, and have even been a featured guest on three Star Trek cruises. Your passion for Roddenberry's creation seems to be at the forefront of so much of what you do. Do you have a similar background with exercise, or was this book a challenge to research and write?

RP: Other than being great at avoiding it for years, I've no experience with exercise. Since it was important that the exercises featured in the book were real, and not jokes, it was important to consult with someone who knew what they were talking about. I was really fortunate that Chris Tutela, a certified trainer (and a great guy despite his limited Star Trek knowledge) was willing to work with me on all of the exercises.

C@M: One of the things I love the most about Body By Starfleet is how much fun you've made a book about fitness, a subject which can be intimidating. Many of the exercise names are very funny (Wesley Crunchers is my favorite), and the names and illustrations go a long way to take a lot of that intimidation away from the reader. You've even included a group of exercises that aren't for humanoids, for humorous purposes. Was taking the fear-factor out of fitness a conscious goal when you were writing the book?

RP: Absolutely. I rarely look forward to exercising, but I know that if I can have fun while doing it, I'll not only be more motivated, but the time will go quicker. My hope, by injecting fun into every exercise, was to make people smile while they squat! I had a great time trying to "trek-up" some of the exercises. Wesley Crunchers was one of the first ones I came up with, and is still one of my favorites. I really like "Gorn Walks" and "Deanna Troi's Active Listeners" too!

C@M: Body By Starfleet is a completely immersive reading experience, written as it's a fitness manual sanctioned by Starfleet, never using real-world terms where Star Trek terms will suffice. Because of this immersion, I think the book is a powerful education tool for those who might not be die-hard Trek enthusiasts. A reader will come away with knowledge about the Andorians and their history in the United Federation of Planets, how starships are powered, and the function of the Genesis Device. Was this educational aspect intentional on your part, or an unintended side effect of your fandom?

RP: I'm so glad to hear this! I tried to make the book as accessible to as many people as possible. I tried to include some deep-dive Easter eggs for die-hard fans as well as some more popular tropes for those relatively new to the franchise. I'm a firm believer that Star Trek is for everyone, and since everyone has their own unique entry point, I'm really happy to hear hear that everyone can find something in it for them.

C@M: What has the reaction to Body By Starfleet been from the Star Trek fan community?

RP: Really positive! I think everyone appreciates the underlying mission of the book: it's not to become the thinnest or strongest or fastest person, it's to take steps, however small, to live your best and healthiest life. I'm always impressed with how extraordinarily supportive and encouraging Star Trek fans are of one another, and hope that they see this as another tool they can use to experience and celebrate Star Trek together.

C@M: Finally, Gene Roddenberry's vision of the future continues to resonate in our culture, over half a century after the first voyages of the Starship Enterprise, as perfectly evidenced through Body By Starfleet. Why do you think new generations of audiences continue to connect to the worlds and themes of Star Trek?

RP: There are lots of franchises and sci-fi things out there, but Star Trek, to me, has always offered fans a more meaningful and multi-faceted experience than anything else available. Perhaps it's because (aside from the movies) the majority of Star Trek has been, and is still, consumed within one's own home rather than a movie theater, or because the half-century of stories offer humor, drama, social commentary, action, allegory, and more, there's something for everyone. Plus, Roddenberry's vision of the future is one that, I think, we all strive for, especially now: a future filled with equality, respect, dignity, and hope.

C@M: Robb, thank you so much for your time. I think your book is a joy to read, and it's done with such a loving wink. As a long-time Star Trek fan, I really appreciate what you've accomplished. Thanks again!

RP: Thank you for the opportunity to share the book with your audience. I had a great time working on the book, and hope everyone enjoys it (and breaks a sweat, too!). Live Long and Prosper!

Robb Pearlman has written over thirty books, including Body By Starfleet, Search for Spock: A Star Trek Book of Exploration, Fun with Kirk and Spock, The Wit and Wisdom of Star Trek, Star Trek: Redshirt's Little Book of Doom, What Would Skeletor Do?, Rick and Morty Book of Gadgets and Inventions, and 1001 TV Shows You Must Watch Before You Die. Find him at RobbPearlman.com and @msmazeppa on Twitter!