"Q" and A with Star Trek Comics Writer Scott Tipton

C@M: Scott, The Q Conflict does something that I don't believe has ever been done before: it brings characters together from four distinct eras of Star Trek history and allows them to play in one sandbox. Was there a reason that you and your co-writer David picked now to tell this particular story?

ST: Because now they let us do it!

Seriously, though, when IDW approached us, they said they were looking for a giant event series crossing over the four Captains and their crews, and it was up to us to come up with a story big enough and crazy enough to hold all the ideas we had. And it seemed that the only antagonist big enough to warrant involving all four crews was Q.

C@M: Let's talk about Q. He's a fan favorite, as well as one of the most powerful beings in all of Trek. This book is even named after him! Can you tell us how you approach writing reality-bending, omnipotent characters such as Q? Does that power make them easier or more difficult to write? Any more or less fun to play with?


ST: With Q, the powers don’t really enter into it. Q’s character was so well defined by both the writing staff on TNG and VOYAGER, and John deLancie’s brilliant performance, that his dialogue practically writes itself. I can “hear” Q’s voice in my head as I’m writing, if that makes any sense. Q’s character is very complex, his motivations often shrouded, obscured by the egotistical front he keeps up. 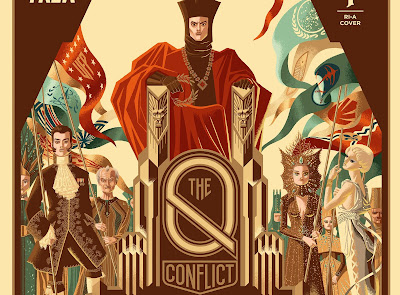 C@M: IDW has described The Q Conflict as "the biggest Star Trek crossover ever." I think that's both an accurate description as well as a daunting one. What are some of the hurdles and challenges in pitching a story as epic as this one?

ST: There are a lot of plates to keep spinning! How do you handle the differences in time period, how do you decide which versions of the characters to utilize, how big a story can you tell in the limited number of pages you have to work with, how many guest-star surprises or cameo appearances are too many – the challenges go on and on. But the biggest concerns for us are always “Does the story make sense and play fair?” and “Is it a Star Trek story?”

C@M: Since so many of the characters in The Q Conflict are literally the stars of their own show, did you have any problems with them sharing the spotlight with one another? Did any of them have voices that tried to dominate? I'm definitely not thinking of Shatner's portrayal of Kirk.

ST: Well, we had to face the fact that with so many characters to service, not all of them are going to get the kind of “screen time” that we’d wish. Which means that some of our favorites will be relegated to little more than background roles, which is a bummer. But we’re trying to give everyone a trademark moment somewhere along the way.

What has emerged is that by bringing these characters together, we’re getting to see new facets of their characters emerge. I love writing Kirk, for example, but how does Kirk interact with Commander Worf? These kind of new situations have been what’s made this series so fun to write. That and finally getting to write for Captain Janeway. 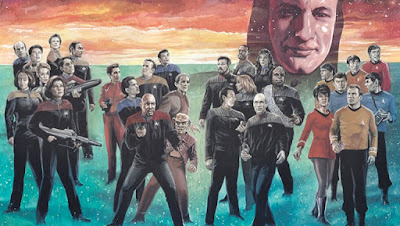 C@M: Let's switch gears a bit: this is the "Barbara Walters" portion of this interview. Harlan Ellison wrote arguably the most significant Star Trek episode ever: The City on the Edge of Forever. You and your co-writer David adapted the original screenplay for comics under the guidance of Ellison, and I've heard Harlan was someone you greatly admired. Can you tell us what kind of impact that relationship had on your work and life?

ST: Everyone always says never meet your heroes; you’ll always be disappointed. I’m one of the lucky ones. I met my childhood hero and he didn’t disappoint.

I grew up reading Harlan’s books and essays, and he was a huge literary influence on me. Through sheer happenstance I wound up meeting him well before the CITY project, when the comic shop I own handled the sale of part of his legendary comic-book collection, so I’d gotten to know him personally, which I think was probably at least part of why he trusted us to handle adapting his work.

We worked really hard to keep every word of Harlan’s dialogue in that book, and convey every bit of Harlan’s stage direction to the artist JK Woodward, and in five issues of production, the only note we ever got from Harlan was a phone call just after he read the script for the first issue: “That was a hell of a nice script you boys wrote.”

In the foreword for the hardcover edition, Harlan refers to me and my brother as “the absolute paladins of my original dream,” which is just about the nicest thing anyone will ever say about me.  And I still have Harlan looking over my shoulder every day as I write. 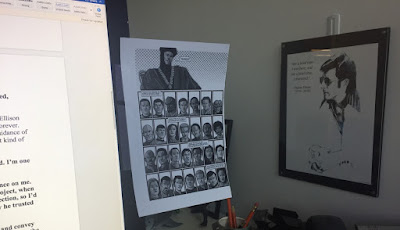 C@M: That's incredible, Scott. Speaking of getting feedback, you've written Star Trek stories that take place in many different eras of the franchise, including the four that are represented in The Q Conflict, and you've had a chance to write many of the characters. Have you gotten any reactions from the fan community over certain storylines or character depictions that sticks out to you?

ST: Not so much specific storylines or depictions, as much as a general appreciation about how much we try to stay true to the source material and really make our stories “feel” like Star Trek.  Although I do recall Whovians writing in to say that they liked that we treated the DOCTOR WHO cast well, which I appreciated.

C@M: Star Trek has always carried powerful social commentary and embodied the ideals that Gene Roddenberry believed in so deeply. Given the current discord in our society, do you feel any responsibility to inject your stories with those ideals and upward-reaching themes?

ST: I think any time you’re writing any sort of Star Trek, you have to stay true to that notion of the Roddenberry Utopia, unrealistic as it might feel in the harsh light of today’s reality. I think it was Jonathan Frakes who remembered Roddenberry telling him “In the future, there will be no hunger, there will be no greed, and all of the children will know how to read.” If you can’t make yourself believe that even a little, you’ve got no business writing Star Trek.

C@M: As a writer, your name is becoming synonymous (even ubiquitous) with the Trek comics. After writing so many Star Trek stories, have any of the characters surprised you? You know them like the back of your hand, but did any of them pull you in a different direction than the one you had mapped out when you began writing a particular story?

ST: There’s been a few over the years. I loved writing for The Doctor and Amy in our TREK/WHO crossover, and writing Taylor in THE PRIMATE DIRECTIVE was a delight and a surprise – dropping such a vital and almost belligerent factor into the nice, clean, practically anti-septic world of the Federation was endless fun.  But the biggest left turn was probably Barclay in MIRROR BROKEN – what started off as kind of a throwaway idea for the Free Comic Book Day Zero issue, as a way to introduce readers to the Mirror Universe, unexpectedly turned into the heart of the series, especially in his relationship with Data. It’s one of my favorite things we’ve done.

C@M: Finally, after a story as huge as this one, I'm wondering what the future holds. It seems to me that the only logical step forward after a story about god-like beings would be to write a story in which Star Trek goes looking for God himself. How could that possibly go wrong?

ST: “What does God need with a starship?” 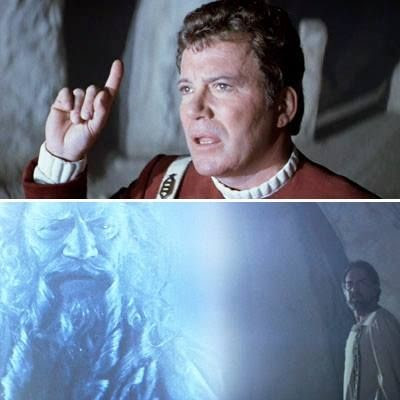 In addition to his comics work, Scott Tipton also authors a weekly column called "Comics 101" at BlastoffComics.com and is the co-host of the Blastoff Podcast. Visit Blastoff Comics at 5118 Lankershim Blvd, Los Angeles, CA. The first issue of The Q Conflict is available now from IDW Publishing!