In his previous adventures, Santo has faced vampires, monsters, and mad scientists. In 1970's Santo vs. the Riders of Terror, our silver-masked hero leaves the dark graveyards and supernatural shenanigans behind to square off against a group of outlaw bandits in the old west!

One of the great things about the Santo movies--and Mexican storytelling in general--is the prevalence of magic realism, which allows for extraordinary elements in conventional settings. With magic realism, the unreal exists alongside the mundane, meaning that anything is possible. Therefore we have a Santo movie in which the character exists entirely in the old west. He doesn't time travel to the old west like we've seen in previous movies; in this outing, he's already there. 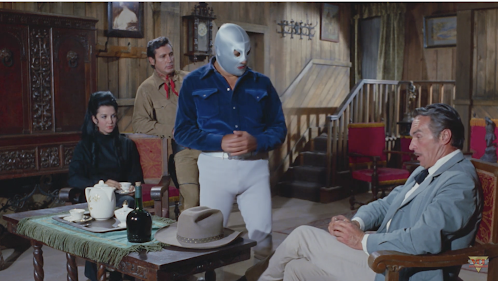 One part The Lone Ranger and one part Zorro, the western version of Santo rides a white horse and travels the countryside helping those who need his services. Who was that masked man? Santo! In Santo vs. the Riders of Terror, six lepers have escaped from a nearby colony where they've been ostracized because of their affliction. These fugitive lepers immediately head toward the nearby town and break into a house where they ravage the food supply of an elderly couple. The next morning, a posse forms with the goal of capturing and executing the escapees. Even worse, an enterprising group of outlaws realize they can form an uneasy alliance with the lepers for their own profit and use the debilitated men as scapegoats for their own crimes. Santo appears 23 minutes into this 70-minute movie to sort things out and provide justice where it is needed most.

Aside from the lepers, who are played with appropriate sympathy, this is a straight up western with none of the traditional exploitation elements that are associated with many of the entries in the Santo series. The plot and production feels downright episodic and even with a running time of just a little over an hour, this is one of the thinner entries in the Santo cannon. The story almost feels improvised, as if it was being made up on the spot, but it does manage to serve up just about everything we want to see: six shooter duels, spooky caves, and even a full wrestling match in the form of a contest that Santo enters so that he can give the winning prize money to a local orphanage. Santo himself makes the transition to full-fledged western hero seamlessly, trading his spandex for a blue shirt and silver corduroy pants with almost no visual departure from the lucha champion we know and love. 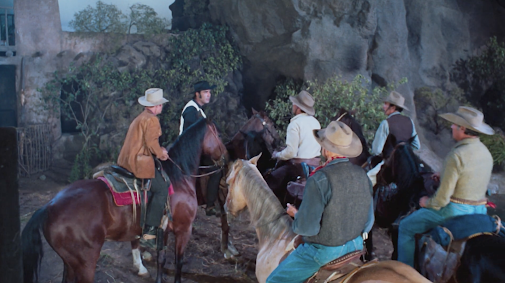 Santo vs. the Riders of Terror arrives on Blu-ray courtesy of VCI's Santo: El Enmascarado de Plata box set with a problematic transfer that nevertheless likely represents the best the film has ever looked on home media. Restoration work was done by Olympusat, who has posted a side-by-side comparison video of their Mexican cinema work on the homepage of their website. Seeing the worn, faded source material for these movies next to the restored versions shows how far they've been resurrected. Unfortunately, the restoration also has removed all traces of the movie's film origins. Film grain is almost non-existent, and what's left is a waxy mess. So much dynamic noise reduction (DNR) has been applied that many elements take on a phantom-like quality. A cascading waterfall is so processed that the water looks like clouds. In one scene, a character sweeps the floor of a horse stable and the dust appears to phase in and out of reality like a ghost. Thankfully, colors are bright and bold with high saturation levels. It's frustrating to see how close to greatness these transfers could have been had the digital post production tools been used with more restraint, but the fact that the movie survives at all is cause for gratitude. As with most of the other films from VCI's Blu-ray set, the original Spanish audio language track was not an option for inclusion so we have a new dub. For the skeptics, it's worth mentioning that the dub does appear to have been conducted with a Latin cast and production staff.

Dr. David Wilt provides a brief, three-minute introduction to Santo vs. the Riders of Terror, explaining the western setting and that this film, like several other Santo movies, also exists in an alternate version that includes a few added scenes of nudity for foreign markets. Unlike the more adult version of Santo in the Treasure of Dracula, the raunchy version of this film, Los Leprosos y el Sexo (translation: The Lepers and Sex) has been locked away in the vaults of the Cardona family who do not wish to see it circulated. 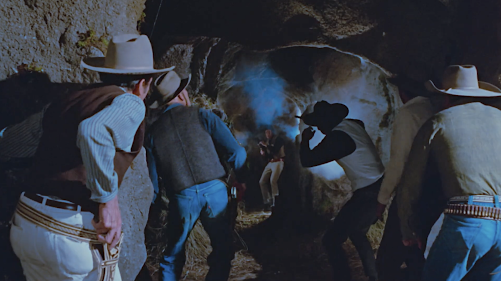 As a noble western more than a creature feature, Santo vs. the Riders of Terror stands apart from the other films in the VCI Blu-ray box set by breaking from horror and exploitation traditions, though clearly the lepers in the film are present for shock appeal on the posters and marketing material. As such, it serves as a palate cleanser from the more frightful offerings that comprise the rest of the films making their Blu-ray debut. In terms of context, both American and Euro westerns were in a very different, more revisionist place in 1970 than this story, which feels like a throwback to the 1950s. A few bloody gunshot wounds aside, this is an altogether wholesome adventure more suited to a Saturday matinee than a midnight movie. Ride on, Santo!