Review: Santo in the Treasure of Dracula (1969) 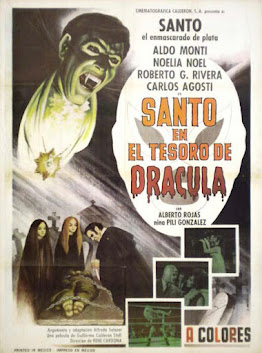 El Santo faces his greatest threat yet: Dracula, the Prince of Darkness! But the behind-the-scenes story of this film and its two lives may be even more bizarre than the adventure on screen.

Santo in the Treasure of Dracula combines the Gothic horror of Bram Stoker with the Space Age spectacle of the James Bond franchise for something completely off the wall. Where to start? Santo has built a time machine. He's not sure if it's going to work yet, but his friend Luisa (Noelia Noel, Night of the Bloody Apes) volunteers to test it out. Success! Luisa finds herself back in the 1800s in what might as well be a Hammer horror movie, where she is seduced by Dracula himself (played by actor/director Aldo Monti), who wants to make her his bride. As Santo and his team watch the events unfold from a television monitor (somehow they can see backwards in time), they also learn of Dracula's secret treasure! Things escalate quickly, and Dracula is about to turn Luisa into a vampire when Santo decides they must bring her back to the safety of the 1960s. With Luisa safe and by his side once again, Santo and his friends must seek out the modern resting place of Dracula to finally put an end to his reign of terror. Their attempts are blocked by a black-hooded man who seeks the treasure of Dracula for himself. Along the way, there are graveyard ambushes, subterranean crypt excavations, and because no Santo movie would be complete without it, a full wrestling match against a villain! 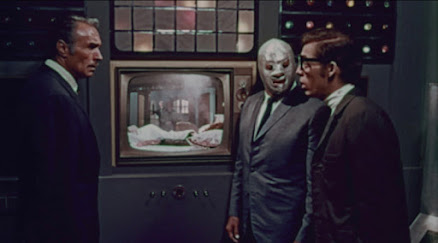 Santo in the Treasure of Dracula is so much fun. Ostensibly, this is a kid's movie (more on that in a second) filled with magic realism, harmless horror, and tons of matinee-level thrills that would have fired the imaginations of young audiences as they watched their favorite silver-masked hero battle evil with latest hi-tech gadgets and cool sixties toys. The time machine itself is the best: it's a red spiral wheel at the end of a tunnel with a conveyor belt. Probably inspired by the sixties television series Time Tunnel, a smaller version of this time machine pops up in the movie Austin Powers: The Spy Who Shagged Me. "Ladies and gentlemen, I'm about to travel through time. I bid you adieu." They're too similar to be a coincidence, so I can't help but wonder if someone on the crew or even Mike Myers himself was a fan of Santo and his inventions. Either way, the movie never asks or expects to be taken seriously, as the frequent jokes and sight gags make clear. When his skinny, cowardly friend doesn't want to stray too far from the group during a graveyard mission, Santo gives him a whistle, but the geek swallows it by accident! Santo solves this problem by picking up his friend and shaking him upside down. 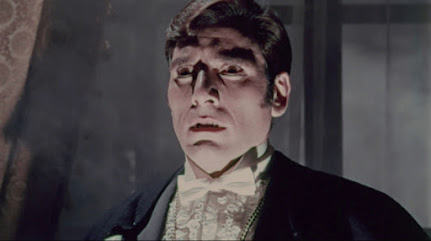 The tone is light and goofy. This is Saturday afternoon fun, presented in gorgeous color. Yes, this film was shot in color! Many of the marketing materials tout this feature as a selling point to get audiences into seats. In the coming years, the original color version of this movie would be lost--or at least removed from circulation--with all television prints coming from an inferior black and white version. Because of the scarcity of the theatrical color print, it had come to be widely accepted that the original film was actually shot in black and white while an alternate version was shot in color. Now the original film is featured in the new Blu-ray set Santo: El Enmascarado de Plata from VCI Entertainment and the truth can finally be known. 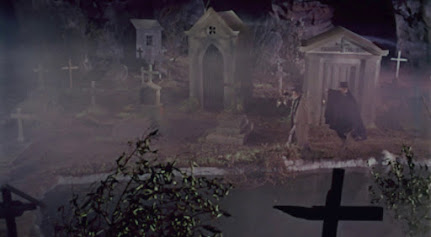 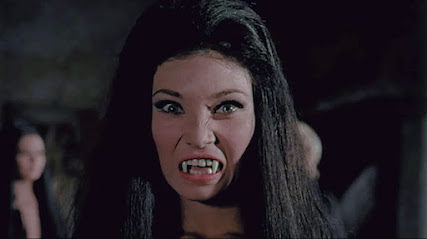 It should be noted that El Santo never appears in any of these salacious scenes. It's been speculated that while he knew about the added adult material (as many as six other Santo films may have received the same treatment for foreign audiences), he didn't want those scenes to be seen in Mexico, as it would have been devastating to his public image. For the purpose of this review, I watched both versions of the film. The "adult" version is incredibly bizarre and the nude material completely interrupts the flow and the sense of child-like wonder the movie commits so fully to establishing. In the theatrical cut, for instance, Dracula initiates two new women into his cadre of vampire brides. They all wear black robes and he pulls the cloth away from their neck so he can mark them with his insignia. In the "sexy"version, the same actresses are present in the scene, but this time their robes hit the floor and Dracula gropes and fondles them. Another scene with Luisa finds Dracula watching while she sleeps as he places her under his thrall. In the alternate version, there's more groping and fondling. Who knew Dracula was so handsy? 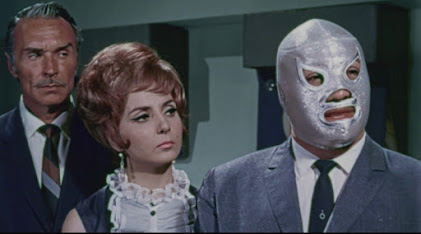 Thankfully, VCI's new Blu-ray box set corrects this and we now have the original theatrical film in color and without the skin (the "sexy" version is not included), just as it was originally shown in North America. As Dr. David Wilt says in his 8-minute introduction to the movie, this is the version that Santo and director Rene Cardona wanted their audience to see: restored as it was presented to kids and families in 1969. I'm glad that we have both versions on home media (the "sexy" version even contains a "theatrical vs sexy" scene comparison feature), but I know which version I'll be watching from now on. 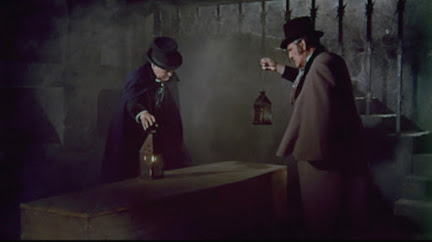 That brings us to the audio and video portion of this review, and I find myself grading on a curve as I discover more information about these Santo films from VCI. Restorations for these films appear to have been done years ago in Mexico by a variety of sources and don't reflect the standards that we expect from the industry leaders in the current market. Yes, the film is in color, but there has been so much digital tinkering here that it sometimes resembles Frankenstein's monster, not Dracula. The image looks heavily processed; digital noise reduction has been applied so liberally that everything looks like it's made of wax. Shadows have jagged, pixelated edges. Even the colors are inconsistent. A scene near the beginning of the movie shows a car driving by a door, and the edge of the door keeps appearing and disappearing like there's a glitch in The Matrix. Some of these issues may be the result of encoding on VCI's part, but how much of this comes from the restoration work itself conducted by volunteers remains unclear. Expectations should be set accordingly. 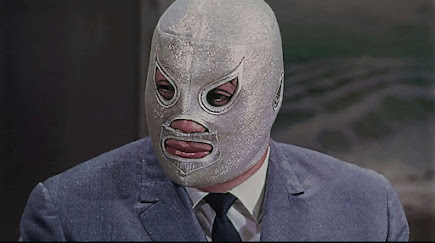 Instead of the original Spanish audio (which was not offered to VCI as part of the licensing agreement), we have a brand new dub, created exclusively for this VCI release. It's a cartoonish approach, owing to Mystery Science Theater 3000, and I can't say I'm a fan or that it would have been my first choice, but it does somehow seem fitting to this over-the-top movie--especially as I learn why VCI had to commission a new audio track for this film in order to release it in America. 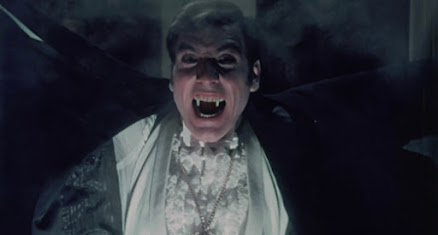 There are six more movies on the new Santo Blu-ray box set and I suspect that we're in for a bumpy journey. The movies are wonderful, serving up big slices of campy fun with a wink and a smile. They're my kind of fun, and once again I find myself making a comparison to the 1966 Batman television series in terms of tone and approach. These romps were never meant to be taken seriously, but then again, they also weren't meant to be mocked. The key is to enjoy them on their own terms, not at their expense. Santo in the Treasure of Dracula is not only in on the joke, it's telling the joke. To approach it with irony is to miss the point entirely. The new VCI Entertainment Blu-ray for Santo in the Treasure of Dracula is hard to recommend from a technical perspective, as is their previous Blu-ray release of El vampiro y el sexo, but the new box set does present the film in the most complete version and includes new bonus features that feel essential. If you're a fan, you'll have a blast discovering Santo in the Treasure of Dracula as it was meant to be seen...just not as it was meant to be heard.