Review: Santo in the Vengeance of the Mummy (1971) 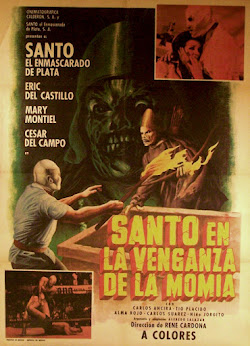 The Silver Masked hero is back to face off against the fearsome forces of darkness! The 1971 film Santo in the Vengeance of the Mummy finds our wrestling champion deep in the jungle as part of a scientific expedition to discover the tomb of an Aztec mummy. Upon arrival at the site, a group of locals appears to warn them of the mummy's curse: "Stay away from the burial site or be doomed!" Of course, Santo and company don't heed the warning and quickly find themselves being picked off, one by one.

The movie offers us a nice twist on the old Universal Monsters and Hammer Films mummy movie formula by moving the title monster from Egypt to Mexico and providing audiences with an indigenous mummy, which is a nice departure from the norm. Instead of a stumbling, lumbering pile of bandages, we've got a regal Aztec warrior who is both agile and logical. The origin story is pretty similar to what we expect: forbidden love, ancient curse, doomed to a hell of never-ending torment. But there's more than meets the eye to this legend as everything is not quite as it appears. Two obligatory wrestling matches bookend the film, but the change of scenery to the deep jungles of Mesoamerica and the constant predatory threat of death from the shadows keeps this one moving quickly. Also, Santo wrestles a jaguar. 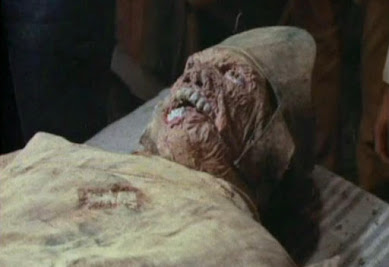 The body count is shockingly high in this movie, since most of the Santo films that I've watched don't often feature deaths that affect Santo or his friends. That's not the case for this entry, and members of his expedition drop faster than you can say "camp counselor." There's even an attempt to give Santo something of a romantic love story in this outing, though anyone hoping to see a domesticated El Santo hanging up his tights and settling down is going to be perpetually disappointed. However, we do get to see Santo the mentor and father figure, as his actual son Jorge plays Agapito in this film, a young, scared boy who needs a father figure, providing an opportunity for paternal tenderness. In his adult years, Jorge would don the mask himself and continue the legacy of his father as El Hijo del Santo, a multi-title-holding champion through the 1980s and 1990s. 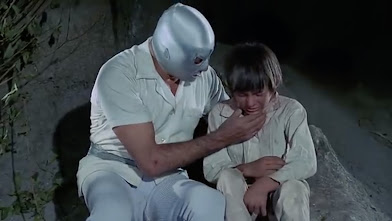 The film makes its Blu-ray debut as part of VCI Entertainment's Santo: El Enmascarado de Plata box set and represents the best transfer from the collection that I've seen so far. The new HD image was created by Olympusat and is definitely not free from problems, but there's a visible grain structure in the movie and less of the over-processing that plagues some of the other entries. In fact, Santo in the Vengeance of the Mummy looks downright filmic sometimes, with visible artifacts that B-movie fans love, but with bold colors and all the benefits of an HD restoration. As is the case with most of the films in the box set, no Spanish language track is included due to lack of licensing availability, so a new English dub featuring Latino voice actors is our only audio option. The movie is preceded by a brief introduction from Dr. David Wilt, the Mexican film expert who is our leader for this Blu-ray foray into the world of Santo. 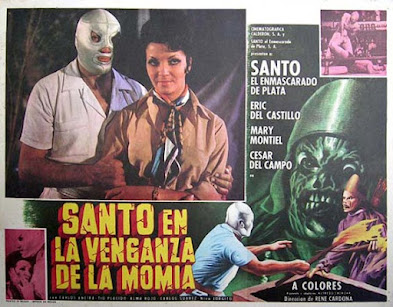 I really enjoyed Santo in the Vengeance of the Mummy. As wrestling fans know, the matches where our heroes face overwhelming odds are the ones we remember the most. Similarly, Santo works best when he's facing supernatural menace that causes normal men to cower and run away. The indigenous twist on the standard mummy formula works well here and the jungle setting makes this one feel fresh. Also, this may be the only mummy movie in the history of horror movies that features an extended brawl with the monster at its climax!