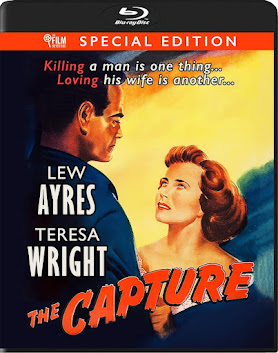 It's a great time to be a John Sturges fan. At the time of this writing, many of the director's films are being restored and given high definition and Ultra HD upgrades from the previous DVD editions, offering the best home media presentations to date for modern film fans. The last few years alone have seen the restorations of Underwater!, Last Train from Gun Hill, Bad Day At Black Rock, and The Great Escape, with even more planned for the coming months. There's never been a better time for cinephiles to discover or re-evaluate the work of an under-praised filmmaker who may not have had a particular auteur style, but was a master all the same. Now the preservationists at The Film Detective have added another film from the Sturgis library to our shelves: 1950's The Capture. 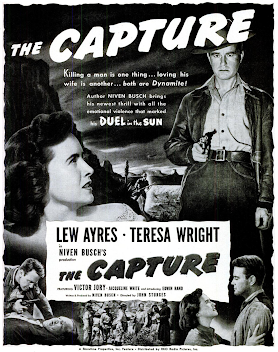 The Capture is a wonderful film that plays to the strengths of its director and defies categorization by equally serving elements of crime, romance, western, and noir. The story begins with an injured man (Lew Ayres) on the run from the authorities in the Mexican wilderness. He happens upon a mission where he meets a priest (Victor Jory) who takes him in and gives him shelter. As Ayres begins to tell the story of how he came to be wounded and on the run, we flash back and learn that he was working at an oil field that had been robbed of their payroll. Tasked with finding the thief, he sets off alone as a one-man posse where he happens upon a solitary traveler, who he believes is the bandit. Things escalate too quickly and he pulls the trigger, knowing in his heart that he shot too soon. Haunted by his mistake, he hops on a train headed anywhere out of town and ends up working at the ranch belonging to the widow (Teresa Wright) of the man he killed. Things get even more complicated when he discovers that he may have shot the wrong man. As more bodies start to stack up, can he prove that he's not a murderer? 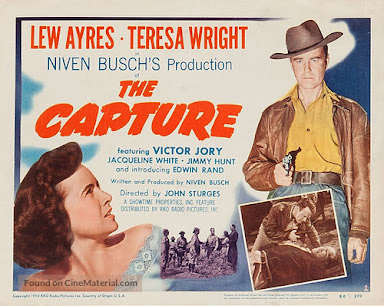 At its core, this RKO production is a western, but placed in a 1950 contemporary setting with cars and modern conveniences. This predates Sturges' Bad Day At Black Rock, which also presents a traditional western tale played out against the then-modern setting of the mid-century west. The harsh and unforgiving land takes a physical and mental toll on our characters and also provides a true sense of remoteness that mirrors their isolation. Noir elements further add to the genre movie vibe: the flashback device is a hallmark of many crime films and detective tales, and a very noir-like narration from Ayres is steeped in hard-boiled dialogue, delivered with a gritty rasp that speaks to too many cigarettes and too much tequila. 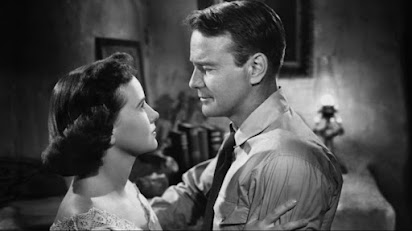 Lew Ayres delivers a solid performance as a good man who made a mistake that may cost him everything, but who is also strong enough to fight for survival. Teresa Wright is perhaps the real star here as the angry widow of a man that she never really connected with. There are different levels at work in her portrayal, with bitterness, hurt, pride, strength and intrigue bubbling beneath her stoic exterior. It's a remarkable role from an actress who had a remarkable career. The thing that I love about lower-budget character pieces such as this one is the nuance at play underneath the story. The people are human and fallible, and they make the same mistakes that we would were we in their shoes, which leads to an empathy that makes detached viewing nearly impossible. These aren't larger-than-life superheroes or even A-list stars with square jaws and impossible beauty; no, they're real people who represent us. 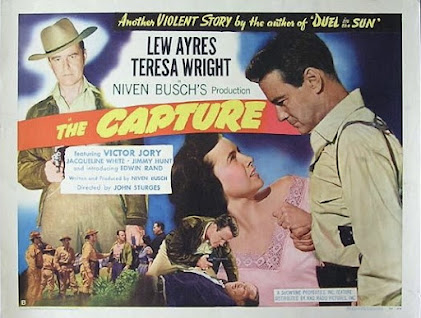 The script was written by Teresa Wright's husband, novelist and screenwriter Niven Busch, adapting his own book for this big-screen yarn. Busch had started in Hollywood as a screenwriter during the Pre-Code days, and it seems to me as if the dusty, trail-worn dialogue of The Capture is the distant, more experienced offspring of the staccato, machine-gun-like discourse of the thirties. By the early forties, Busch was also writing novels like Duel in the Sun, which was adapted into a 1946 movie from David O. Selznick and which has been nicknamed Lust in the Dust. Teresa Wright and Niven Busch were married for a decade and split in 1952, meaning this film comes near the end of their relationship. Does that real-life behind-the-scenes disintegration play into Wright's on-screen performance? 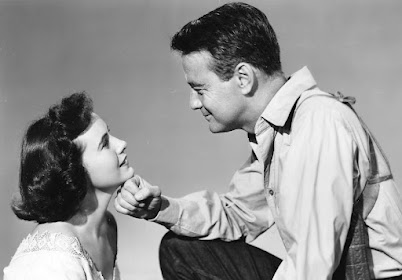 The Capture now arrives on Blu-ray from The Film Detective and results are impressive, though not flawless. The Film Detective specializes in providing the absolute best scans possible for films that largely exist within the public domain. As a consequence to public domain status, existing elements have often not been kept in the best condition and this is no exception. Much of the film looks wonderful with crisp contrast and nice grain structure, but a reel near the last quarter of the film bears a faint cross-hatch pattern that almost looks like the film is being projected onto graphing paper. I don't want to overplay this imperfection because the movie looks miles and miles better than any other presentation I've seen to date. Public domain films are often circulated in terrible quality: video tape dupes of 16mm sources, sometimes three or four generations removed from their original source elements. While perhaps not reference quality, this restoration is, in all likelihood, the best this movie is ever going to look and all reasonable expectations should be met. The new disc is most welcome and comes highly recommended not just for the new transfer, but for the wonderful new supplements, as well. 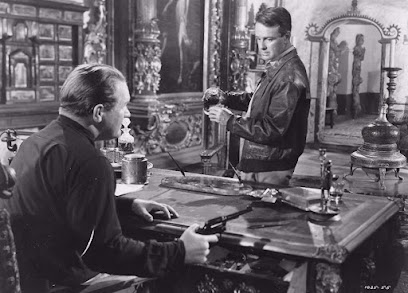 Those supplements include a brand new audio commentary by author/screenwriter/film historian C. Courtney Joyner and western historian Henry Parke. The track is conversational, but extremely informative as both speakers know western films (and film in general) like the back of their hand. Facts and tidbits abound, but the track never feels daunting or unapproachable. Writer Don Stradley contributes to the three remaining features: Teresa Wright: The Actress next Door is roughly four minutes long and offers a brief overview of the leading lady's career. John Sturges: Man of Action is another brief (less than five minutes) look behind the scenes, this time focusing on the director and his connection to action as evidenced by Bad Day At Black Rock, The Magnificent Seven, Joe Kidd, and The Eagle Has Landed. Finally, Stradley contributes an intriguing and detailed ten-page written essay entitled Not Quite Picture Perfect: The Doomed Marriage of Teresa Wright and Niven Busch. The relationship drama on screen only hinted at the reality of Teresa Wright's love life.

While The Capture is not a masterpiece in the same category as the director's bigger successes, it certainly is a very well-made and capable movie from a director who is sometimes overlooked and said to lack a distinct style. I'd argue against that notion and once again champion the economy of Sturges and the sense of urgency that so many of his films convey. This is not an action-packed movie, but the pacing of the film is brisk and there's absolutely nothing here that slows down the plot or feels unnecessary. My favorite Sturges films are the ones that are smaller in scope. In contrast to the grandiosity of The Great Escape, I believe that when Sturges hones in on just one or two people caught in a whirlwind of circumstances that threaten their survival, something really special happens on the screen. The Film Detective continues to provide an excellent service to film fans who seek these movies in the best possible quality with lots of vital supplemental features and an affordable (currently less than $17) price.