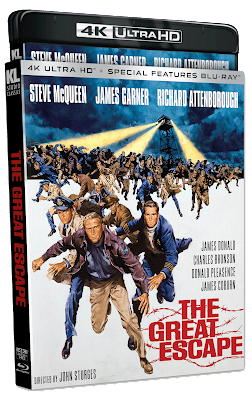 You couldn't ask for a movie with a higher pedigree of talent in front of the camera and behind the scenes. 1963's The Great Escape is populated wall-to-wall with actors that I enjoy: Steve McQueen (Bullit), James Garner (Support Your Local Sheriff), Charles Bronson (Mr. Majestyk), Donald Pleasance (Halloween), James Coburn (In Like Flint) and Richard Attenborough (Jurassic Park) lead an all-star cast of current A-listers (and some that would be). Handling directing duties is John Sturges, a director who helmed more than his fair share of classics, including Last Train from Gun Hill (1959), The Magnificent Seven (1960), and The Eagle Has Landed (1976).

So it's with something close to guilt that I admit in this review that I don't love The Great Escape. 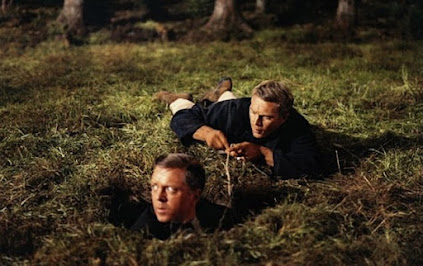 I know I should. All the elements for success are there, from real-life heroism, underdogs that the audience can (and should) root for, even triumphs and tragedies as played out against the austere backdrop of a Nazi prison camp during World War II. And yet I simply do not connect with this film. Others do, and champion it (rightfully so, I recognize) for its relatable elements, fine performances, and exceptional direction. The movie was nominated for an Oscar upon its release, and it's become a film that fathers pass down to their sons, a statement about the power of resolve and determination.

The film tells the story of a group of Allied soldiers who are captured and held as prisoners of war at a remote German location. Beyond the barbed wire and guard towers of armed soldiers lays the possibility of freedom, if only they could reach it. Individually, the men represent mavericks who each embody a specialty (the tactician, the forger, the digger, etc), but united together, they're capable of mounting the largest escape in modern history. Thus a plan is put into motion that, if successful, would free hundreds of prisoners from captivity and returned to active duty to fight for righteousness. 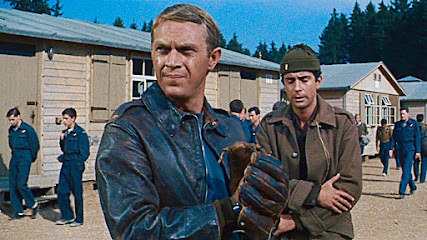 I appreciate that each of the men is presented as fully-formed, three-dimensional characters with strengths as well as foibles and flaws. As their isolation grows, they understandably display signs of human stress and weakness, and some of them would rather die than continue to live in this hell of confinement. While films of 1963 couldn't get away with as much graphic imagery and gruesomeness as films later in the decade and beyond were allowed to, The Great Escape is a brutal look at war-time life and death, with a heavy emphasis on the latter. Because the movie is based on a true story, each failure and fatality carries with it the added sting of truth and realism.

The filming locations of Bavaria and other German sites adds to the feeling of authenticity and ambition, with no Hollywood studios standing in for the real thing. When Steve McQueen rides into the European countryside on his motorcycle, it's clear that he's not cruising the California hills or a horse ranch that once served as a western set. When a train pulls into the station of German town square, we get the real thing, not an imitation. The budget for the film was $3.8 million, and it looks great.

But as much as I admire the individual elements of the movie, it wears me out. With a running time that pushes three hours, it's just too much of everything. There's an awful lot of time spent with the characters doing things that don''t serve the ultimate goal of escape. Yes, these are character moments, and I champion character over spectacle, but with so many cast members, giving each of them their due takes significant time away from the central operation. It's a shame, because John Sturges was a master of economy when necessary, as seen in Bad Day at Black Rock, one of those essential character-driven films that starts exactly when the story really begins and ends not a moment after the conclusion has arrived. There's simply no economy here, replaced instead with scene after scene that don't seem to forward the plot and exist only to extend the running time into something that feels epic in scope without any immediacy or sense of urgency...which is ironic for a movie about a prison escape. I shouldn't be surprised, since the script was co-written by James Clavell, who would write the 1152-page sprawling novel Shogun in 1975. Lest one think I've gone too far out on a limb here, I'm not alone in my thinking: the 1963 review from The New York Times proclaimed the film was "much longer than is artful or essential, The Great Escape grinds out its tormenting story without a peek beneath the surface of any man, without a real sense of human involvement. It's a strictly mechanical adventure with make-believe men." Agreed. 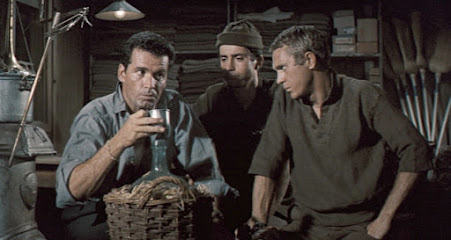 To further double down on my sacrilege, I also am not a fan of Elmer Bernstein's soundtrack. Bernstein, who is without question one of the greatest composers of the 20th century, has contributed a score that sounds whimsical and jaunty, almost like a marching song. As a kid who grew up in the 1980s, I heard the influence of Bernstein's theme for this film in everything from The A-Team to Police Academy. Truthfully, it was the inspiration for every camp movie theme tune from that era, and I simply cannot reconcile the joyfulness of the tune with the tragedy on screen. In one scene, one of our characters is brutally killed; moments later, there's that theme tune, playful and carefree. Maybe that's the point of the score--to counterbalance the grimness of the screen, but that doesn't make it any more palatable to me.

Fortunately, such negative takes as mine seem to represent the minority, and scads of film fans cherish the movie for what it represents. Therefore, a new 4K presentation from Kino Lorber is cause for celebration. Sourced from a gorgeous 2020 4K scan that is filled with fine grain and detail, the film is presented without HDR on a 100 GB triple-layer disc. Two audio commentaries are included: an original track involving John Sturges, James Garner, James Coburn, Donald Pleasance, David McCallum, Jud Taylor, and others, plus a brand new commentary from Steve Mitchell and Steven Jay Rubin, author of Combat Films: American Realism. A second disc presents a bounty of special features on Blu-ray: over two and a half hours of featurettes covering all aspects of the film, from the cast, the historical inspiration for the movie, to the untold story. Burt Reynolds narrates four of the features and James Coburn narrates one. The theatrical trailer is also included. 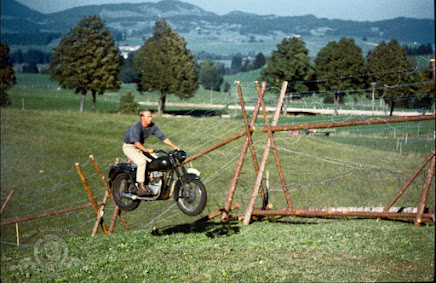 With a stellar cast, direction from one of Hollywood's greats, and real German locations bringing this hard-hitting story to grim reality, The Great Escape represents sixties Hollywood spectacle at its heaviest. Fans of The Great Escape (and there are many of them) don't need this review to convince them to purchase this package, though be advised that the lack of the film on Blu-ray makes this strictly for 4K adopters. For those with the appropriate playback capabilities, this film has never looked so good on home video.