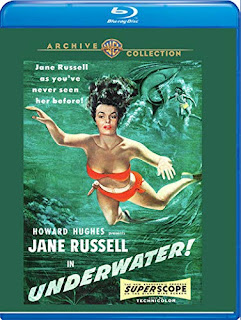 “Skin Diver Action! Jane Russell As you’ve never seen her before!” So declares the poster for 1955’s Underwater!, an adventure movie centered around the perils of deep-sea treasure hunters and the dangerous world they inhabit. And what a world it is! Our two intrepid leads spend their time navigating their boats into the waters where ships sank hundreds of years ago in hopes that they’ll be able to dive deep beneath the ocean surface, uncovering gold and riches untold among the wreckage of the past. This means they’re constantly contending with not only the dangers of the deep sea--including sharks, lack of oxygen, or becoming pinned beneath a piece of debris--but also the human threat of pirates and scavengers. Oh, and let’s not forget dynamite. Miles from the coast, it would seem that threats are everywhere.

To a modern viewer, a lot of elements that made Underwater! impressive and noteworthy in 1955 feel a bit worn, perhaps even...dare I say...dated. The captivating underwater cinematography would become routine over the next decade (Thunderball, anyone?) and the relative low-key vibe that most of this film embodies seems representative of a speed that might today be considered slow. The appeal of the film doesn’t come from outrunning constant threat of death with a thrill every minute. It comes from fully giving one’s self over to the atmosphere of the movie. Our treasure hunters live a life of poverty (treasure hunting isn’t as profitable as it may seem, as our heroes are constantly looking for that elusive score of a lifetime), but they also live a life of freedom. With the wind in their hair and open waters ahead, this movie really shows the liberty of this existence while also depicting dangers that feel grounded and absolutely real.

It's important to place Underwater! in the context of when it was made, meeting the movie on its own terms and not on ours. This film was made relatively early in the cycle of fifties sea-faring adventure films, and the undersea cinematography that we now see on a hundred cable nature shows was still a novelty. Things were changing rapidly, and this movie feels like it captures a particular moment in time, which is now forever preserved. It revels in the adventure itself; there’s not a huge body count. There isn’t a ton of violence. This movie finds thrills in the simple adventure of what lies...say it with me...Underwater!
Jane Russell (1943’s The Outlaw) receives top billing in the movie, though this may be a reflection of her high position in Hollywood at the time, especially coming just two years after her lead role in Gentlemen Prefer Blondes alongside Marilyn Monroe. She brings natural sex appeal and undeniable star power to the film as the romantic interest of one of our two treasure hunters. Richard Egan (Love Me Tender, The 300 Spartans) takes one of those roles, with a voice made for film noir narration and a surprisingly-muscular physique that lends believably to a character whose life depends on his fitness. The other treasure hunter is played by Mexican-born Gilbert Roland (1952’s The Bad and the Beautiful, also just released by Warner Archive), who brings an exotic, worldly quality to the film as a man that we suspect has been everywhere and done everything. He’s a dreamer, a romantic, and a man who lives for today.

Lori Nelson, who genre film fans will probably remember most from her role in 1955’s Revenge of the Creature, the first of two sequels to Universal’s 1954 smash The Creature from the Black Lagoon, occupies a supporting role as the owner of the boat that’s required to find an elusive (and potentially gold-laden) shipwreck site. Joseph Calleia, an actor that noir fans will remember from Orson Welles’ infamous Touch of Evil, is unpredictable as a menacing shark hunter who seems to be after prey of a different kind. He’s just one of several wild cards in what was supposed to be a perfect plan.

All of this is brought to the screen under the direction of the great John Sturges, the man behind films such as The Magnificent Seven and The Great Escape. Those landmark films were still in his future when he shot Underwater!, and yet he had just completed another one of his masterpieces, Bad Day at Black Rock, which had been released earlier in 1955. Remarkably, Sturges also released a third film later in 1955, a Revolutionary War film called The Scarlet Coat. The rate at which certain directors could consistently craft compelling cinema during the Golden Age of Hollywood will never cease to amaze me.
Warner Archive’s new restoration is nothing short of miraculous. After decades of cropped, faded presentations, the new transfer is a nice reminder of how powerful movies like this were on the big screen and how wonderful they can appear in our own homes. The new 2020 transfer was taken from a 4K scan of the original camera negative, restoring once-faded colors and presenting the widescreen image in its original 2.0:1 letterbox aspect ratio. Warner’s commitment to preserving the titles of their incredibly-deep vault for future generations is to be commended.

Underwater! is a lot of fun. While not as classic as some of the films in the illustrious career of its director, John Sturges, it’s a solid adventure film that often feels like a B-movie story dressed up with A-list talent and production values. That’s a compliment. Jane Russell is endlessly charming, and the one-two punch of Richard Egan and Gilbert Roland could have carried several sequels in which they continued to dive for that one incredible shipwreck discovery that would make them rich beyond their wildest dreams. As fate would have it, we only have this one adventure, but it’s been brilliantly preserved by the good folks at Warner Archive. Sail on, sailors!