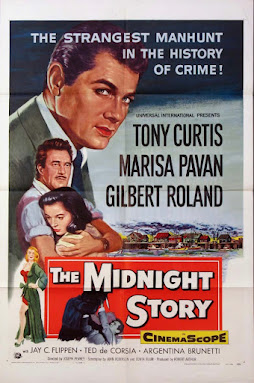 Has there ever been a city more perfectly suited for film noir than San Francisco?  Impenetrable fog rolls in from the bay, secluding the towering steel bridge that looms ominously in shadow. Steep hills represent either insurmountable obstacles or uncontrollable descents, and Alcatraz is a literal unreachable island surrounded by murky water. San Francisco is a living manifestation of noir's themes and atmosphere, so it's no coincidence that so many famous films are set in The Golden City (Out of the Past, The Maltese Falcon, The Lady from Shanghai, Dark Passage).

And then there's The Midnight Story, a 1957 film noir starring Tony Curtis as Joe Martini, a traffic cop who learns that a local priest, Father Tomasino, has been attacked and brutally killed. Tomasino was like a father to Martini, and our hero asks his superiors for permission to help in the investigation because he's so personally invested in solving the crime. When his request is not granted, he turns in his badge and vows to find the killer and bring him to justice by himself. His key suspect is a local restaurant owner named Sylvio Malatesta (Gilbert Roland, Underwater!), who appeared anguished at the priest's funeral and who also bears a mysterious fresh wound on his hand. As Martini investigates, he finds himself working for Malatesta, dating Malatesta's daughter (Marisa Pavan, The Rose Tattoo) and becoming a son to the man he suspects of murder. If his new mentor is guilty, will Joe Martini be willing to turn him and and tear this newfound family apart? 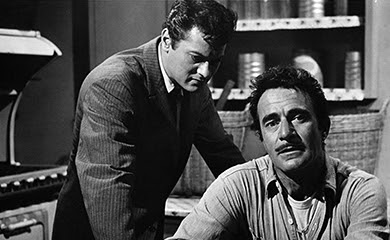 The Midnight Story is wonderful. Tony Curtis is young and lean and self-assured; he's a star and he knows it. This film finds him on the cusp of superstardom: The actor was on the rise all throughout the 1950s, leading the cast in films like Son of Ali Baba and Houdini, but this role marks the last of one type of film before the start of another. His next on screen appearance after The Midnight Story would be in the much-lauded Sweet Smell of Success, then beside Kirk Douglas in The Vikings followed by Some Like It Hot, Spartacus, Taras Bulba...and the rest is movie history as Curtis would transition from character parts into a household name. Gilbert Roland is sympathetic and threatening at the same time. His character is a haunted man with a secret, and we're never quite sure throughout the film if that secret is the same one that Curtis is trying to uncover. Roland makes acting seem effortless and natural, and we're conflicted in both admiring his fatherly strength and fearing his darker side. Marisa Pavan is also sympathetic as the object of Curtis' affections, but also embodies independence as she realizes that Curtis has lied to her and that he may be using her to get close to Roland.

The film is beautifully presented in Cinemascope, allowing the vistas of San Francisco to fill the extra-wide screen and bringing grandeur to what is essentially a B-picture. In fact, The Midnight Story was released on a double bill in 1957 with the Debbie Reynolds romantic comedy Tammy and the Bachelor (both films were directed by Joseph Pevney). This widescreen approach adds literal and figurative scope to the drama, as perfectly embodied in one particular scene mid-movie where Curtis and Roland talk on the ledge that overlooks the city below at dusk...it's all downhill from there.

Like many similar Universal movies from this era, The Midnight Story has been poorly represented on disc. I don't believe the film ever got a domestic (USA) DVD release and has been missing on the Blu-ray format until now. Thankfully, Kino Lorber has included the film in their Film Noir: The Dark Side of Cinema V box set that collects two other obscure noir rarities from the Universal vaults (Because of You and Outside the Law, and--like the other films in the set--the transfer is wonderful. The disc includes a commentary from professor and film scholar Jason A. Ney and the theatrical trailer.

As someone who is in love with cinema, there's something about these fifties films that I find indescribable. Electricity crackles between the frames as these stars of the screen pace and prowl like jungle animals. These stars in these roles in these films embody something that feels like a stick of dynamite with the fuse lit. The rock and roll revolution in cinema form, perhaps? Curtis reminds me of a young Elvis Presley here, hungry and willing to do whatever it takes. He's surrounded by a stellar cast in a quintessential noir city. This is a story of good people, but flawed and unable to outrun their human defects. As the sun sets, the fog rolls in; soon the darkness will consume it all.