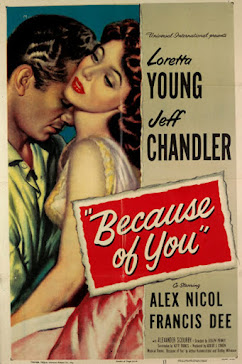 It's a tale as old as time: boy meets girl, boy marries girl, girl doesn't tell boy that she's on prison parole and used to be engaged to a mobster. Boy is in for serious trouble when that mobster comes for revenge after he finds out his ex has settled down with someone else. We've all been there or known someone who has, right?

1952's Because of You stars silver screen starlet Loretta Young as the bottle-blonde moll of a tough gangster (Alex Nicol, The Screaming Skull). Mere moments after we meet them, they're busted by the fuzz, split up, and sent to prison. Young is a model prisoner and is eager to serve her time and rebuild her life; she's eventually paroled and takes a job at a hospital where she meets a combat veteran, played by Jeff Chandler, who is suffering from injuries sustained in battle. The two fall in love quickly, but Young--now dark-haired--doesn't tell her new beau anything about her prison sentence and the fact that she was an accessory to crime. As the two rush toward marriage and parenthood, Young has unfinished business that's about to knock on her front door.

Because of You plays with several common noir themes, particularly dread of inevitability; the past is inescapable and unresolved business seems to have a way of manifesting itself at the worst moment. Young is constantly looking over her shoulder as the history she's tried to outrun can never really be resolved until she's faced it head-on. When her former life clashes with her new one, the secrets she's held so desperately may end up costing her everything. 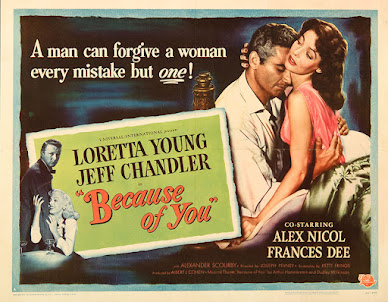 The film is a little on the melodramatic side for my tastes as Young continues to do things that the audience knows is only going to make things harder for her and lead to confrontations that we can see coming a mile away. In that sense, the plot feels a bit contrived and lacks the expert touch that other, similar films possess. Because of You comes from an era where "comedies of remarriage" were successful at the box office and depicted the ups and downs of couples who would get married, bicker and divorce, and then get back together at the end of the picture. This film is no such comedy, but it does offer a more serious, noir-stained take on the formula, which was designed to sidestep the Production Code and have some sexy fun. And make no mistake, sultry-eyed Loretta Young is sexy in this movie. She'd been a star of the silver screen since childhood, and her film career spanned well over 30 years and around 100 pictures, but Because of You finds her very near the end of her movie stardom. In 1953--just one year after this film--Young would retire from films and move to television for The Loretta Young Show, never again to return to the cinema screen that made her famous.

Jeff Chandler, her co-star and romantic interest, was a star on the rise. He'd made a big splash two years earlier in the Jimmy Stewart western Broken Arrow, a performance that earned him an Oscar nomination. His chemistry with Loretta Young in Because of You is real, and the two were genuinely falling in love with each other during the filming of the picture, though--perhaps fueling the angst of the movie itself--they couldn't be together because they were married to other people. This chemistry lasted until Chandler's tragic death in 1961 after a back surgery went horribly wrong. 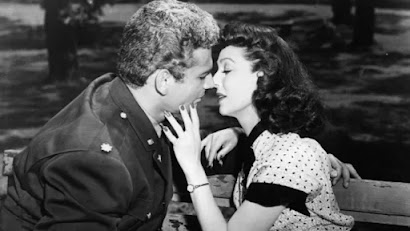 Because of You has been almost impossible to watch on home media and--to my knowledge--was never released outside of the VHS format until now. Thankfully, the good people at Kino Lorber have rescued this obscurity and included it in their Film Noir: The Dark Side of Cinema V box set, their fifth exploration of noir-and noir-adjacent films. The transfer is outstanding and the disc includes a new commentary by film historian Samm Deighan as well as the theatrical trailer. Kino's noir box sets continue to be an affordable (three films in HD with extras for around $30) way to reassess titles that have all but forgotten by modern audiences.

Like so many films that fall under the noir banner, Because of You is equal parts drama and romance and not strictly a crime film. Still, noir themes definitely factor into the story and fans of Loretta Young and Jeff Chandler will be delighted that the film has made its way to Blu-ray. Notably, this film's director (Joseph Pevney), writer (Ketti Frings) and co-star (Jeff Chandler) would re-team a couple of years later on 1955's Foxfire with bombshell Jane Russell taking over for the retired Loretta Young, but the visible chemistry between Young and Chandler makes this one worth a watch, even if the story veers into soap opera theatrics.