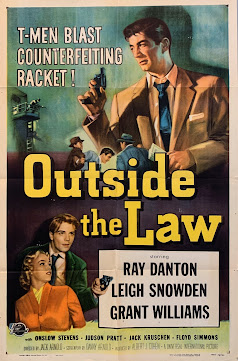 "T-Men Blast Counterfeit Racket!" 1956's Outside the Law is a stellar crime/noir film where all the elements--cast, screenplay, director, cinematographer--come together perfectly. Ray Danton (The Longest Day) plays an ex-convict who is given the opportunity to have his slate wiped clean if he'll go undercover in Germany to investigate the murder of an old Army buddy who was killed while investigating a counterfeiting operation. His commander in the operation is a stern chief Treasury agent (Onslow Stevens, THEM!) who also happens to be his father. He'll also have to get close to his dead friend's fiancee (Leigh Snowden, Kiss Me Deadly) and her tough-guy friend who will do anything to stand in his way (Grant Williams, The Incredible Shrinking Man himself).

Outside the Law just works. It's got tons of that mid-fifties attitude that I love so much, with Danton bringing a rebellious portrayal of a man who has done a crime but also done his time and now just wants to be left alone. As is common with noir films, he's caught in events beyond his own control and left with little choice but to go along with a program that's been laid out for him by Uncle Sam and his own father. That doesn't mean he's not going to do things his own way, though. As he pumps Leigh Snowden for any information she may have about her dead ex, he begins to fall for her, which makes it not only a professional conflict, but also a personal one when Grant Williams keeps thwarting his attempts to get her alone. 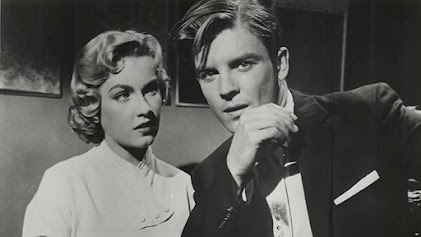 The screenplay comes from Danny Arnold, a writer, producer and director that is more associated with television than movies. This is one of his earliest film script efforts. As a writer and producer on shows like Bewitched and That Girl, he would eventually win awards for his work on Barney Miller. The cinematography comes by way of Irving Glassberg, the man behind the lens of films by Anthony Mann, Don Siegel, and Raoul Walsh. His cinematography on westerns and noir (often for Universal) led to some of the most beautiful films of the 1950s and he's credited as being one of the key players in bringing Clint Eastwood into feature films.

Taking on directorial duties is none other than Jack Arnold, the man behind the fifties sci-fi/horror masterpieces It Came From Outer Space, Creature from the Black Lagoon, Tarantula, and who would re-team with Grant Williams one year later on The Incredible Shrinking Man. For genre movie fans, Arnold is a legend. Any time I'm watching a TV show that bears his name as director (Peter Gunn, Rawhide, Gilligan's Island, The Brady Bunch), I get excited. 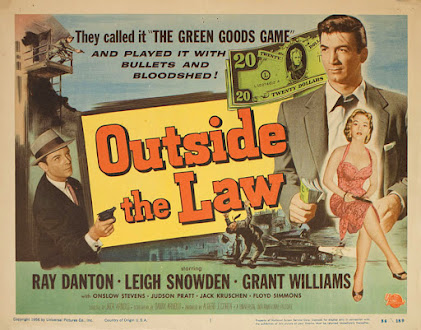 The movie arrives on Blu-ray from Kino Lorber as part of Film Noir: The Dark Side of Cinema V, their fifth walk down the alleys of crime and noir. Like another title from that set, 1952's Because of You, I believe that this Universal film is making its disc debut as part of this new box set. The Blu-ray includes a new audio commentary by film historian Richard Harland Smith and the theatrical trailer.

Outside the Law delivers exactly what I want from a fifties crime film: gritty storytelling, great performances, gorgeous cinematography, and a restless, rebellious mid-fifties spirit that feels like a powder keg about to explode. At only 81 minutes, this is yet another example of why movies from this particular era pack more wallop per pound than so much of what would come later. Bigger budgets and longer running times don't always make the most potent film, as Outside the Law so perfectly proves.