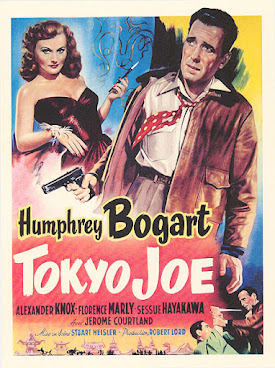 Bogey stars in this crime/noir film about a man doing his best to survive when all the world seems determined to grind him into the dirt.

Tokyo Joe taps into the post-war frustrations that are synonymous with film noir. In the movie, Humphrey Bogart plays Joe Barrett, a former American Air Force colonel who has returned to Tokyo three years after World War II in hopes of running his old nightclub, Tokyo Joe's. There he discovers that his bar is now being watched over by his friend Ito (Teru Shimada, You Only Live Twice) and that the wife (played by Florence Marly) he thought was dead is not only still alive, but has married someone else in his absence. To complicate things even further, an opportunity to smuggle goods on his freighter plane makes it seem as if crime is the only way to survive. With the odds stacked against him, Joe finds himself pushed further and further toward a life of moral compromise, stuck between unsympathetic authority figures and career criminals. 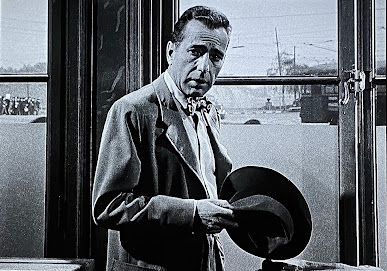 Thematically, Tokyo Joe is a goldmine. The movie was released in 1949, less than a decade after Pearl Harbor and only a few years removed from the end of the war itself. As such, it offers us a crystal clear snapshot of the complicated relationship between America and Japan in the immediate aftermath of WWII, and is surprising in its approach. Bogey's character is a million miles from the "rah rah" heroism found in war movies of the era. He's tired, resigned, and emotionally detached. He's been touched by the horrors of war and left forever changed by his experiences. There's no animosity toward the Japanese people themselves; in fact, the movie paints a sympathetic portrait toward the devastation that was unleashed upon Japan in the form of nuclear warfare. Regret. Sadness. Inevitability. These themes run under the narrative and exemplify the moral struggle that so many Americans were dealing with during the last half of the 1940's as a nation struggled for identity in the aftermath of tragedy. Furthermore, these are the themes that make film noir so relatable, even after all these years. 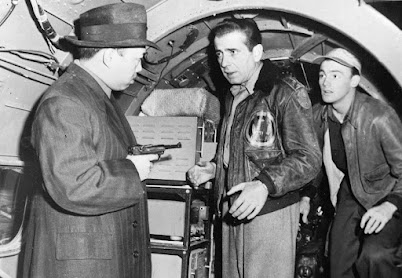 Released by Columbia Pictures, Tokyo Joe typifies the sort of pulpy, exciting adventure film that was Columbia's claim to fame. Smuggling, exotic locales, nightclubs, fist fights, and the crime story keep this film churning along toward an intense and very violent confrontation. Interestingly, most of the film was shot at the Columbia studios, with the exterior shots filmed in Japan by a second unit--the first movie studio to be permitted there since the war ended. Bogey--an original king of cool--looks more weathered than ever at nearly 50 years of age, trading white tuxedos and rumpled trench coats for a leather bomber jacket and a face worn with age, fatigue, and hard living (which would only deepen with the McCarthy hearings of the early fifties). 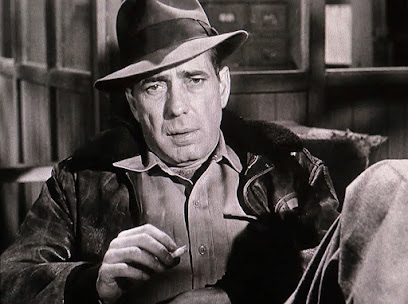 Also, classic film fans will want to keep their eyes peeled for an appearance by Hugh Beaumont in an uncredited role as Provost Marshal Major, yet another stumbling block between Humphrey Bogart and the quiet life. Beaumont had been carving out a niche for himself during this time period in noir films like The Blue Dahlia and as Detective Mike Shayne in the Poverty Row films produced by PRC, but would find massive success as a household name in 1957 when he was cast as Ward Cleaver on Leave it to Beaver. 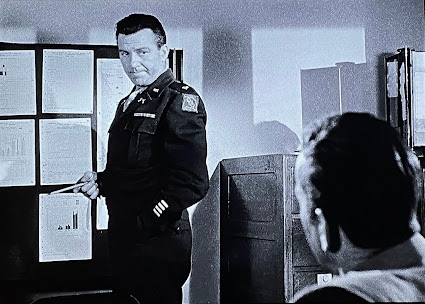 Tokyo Joe is directed by Stuart Heisler, who also directed Humphrey Bogart in another film with an aviation theme, Chain Lightning, which was shot in 1949, but not released until 1950. Heisler's other films such as Among the Living, The Glass Key, and Beachhead are well worth seeking out, as his competence with complex themes and character motivations was very high. 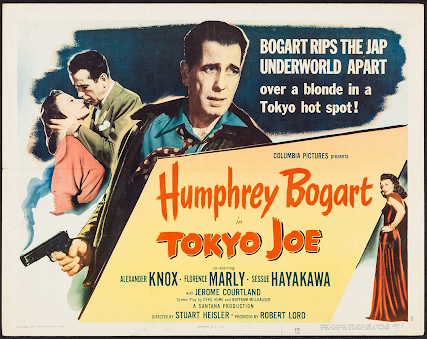 The film is available on Blu-ray from Australia's Umbrella Entertainment as part of a region free double-feature disc that also presents another 1949 Bogey film, Knock on Any Door. The transfer for Tokyo Joe is fantastic: contrast is high and film grain looks natural and crisp. As a huge fan of Humphrey Bogart and his laconic, effortless delivery, I'm a big fan of the movie. The fact of the matter is that Bogart starred in some of the most recognized classics in all of American cinema (Casablanca, The Maltese Falcon, The Treasure of the Sierra Madre, The African Queen, etc.) and films like Tokyo Joe fall through the cracks because they don't rise to the heights of the actor's more celebrated works, but are still well worth seeking out for the qualities mentioned in this review. Tokyo Joe is a solid, sympathetic crime/noir film with lots of international intrigue and a weary performance from one of the greatest leading men ever to grace the silver screen.
1949 Blu-ray Columbia Pictures Film noir Florence Marly Hugh Beaumont Humphrey Bogart noir pulp review Stuart Heisler Teru Shimada tokyo joe Umbrella Entertainment