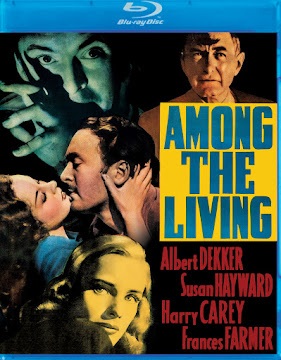 Equal parts Southern Gothic and Film Noir, Paramount's Among the Living is set against the backdrop of a sprawling southern plantation-style mansion that houses long-held secrets, madness, and murder.
John Raden (Albert Dekker) has returned to his hometown for the burial of his father, a wealthy and powerful figure who was the owner of the mill that employs many of the townspeople. After the funeral, he discovers a horrible secret: his twin brother, whom he had thought to be dead for 25 years after a fight with his father, is, in fact, alive! He's been locked away deep within the Raden House all along, completely insane. The town's doctor (played by Harry Carey) forged the death certificate and has been carrying the lie ever since; with the father dead, it's time for secrets long buried to be revealed at last. Before anyone has time to deal with the news, John's maniacal twin brother Paul (also played by Albert Dekker) escapes and heads into town. There he rents a room and meets a feisty young woman named Millie (the outstanding Susan Hayward) who fulfills a femme fatale role in the story, leading Paul along for his money, though never realizing that she's playing with fire until things escalate beyond her control. As violence erupts everywhere Paul goes, the noose tightens around his twin brother John. After all, everyone knows Paul died 25 years ago...
Among the Living is a tense film that leans heavily on the frustrations of mistaken identity and the dangers of mob justice. The scariest thing about the film is that mob mentality has only increased in the 80 years since it was first released. When bodies start to turn up in Paul's wake, nobody is interested in John's explanation or what he has to say. Proof is irrelevant and unwelcome. The public wants "justice" (blood), and is prepared to extract it by any means necessary. The local law enforcement and judicial system are but pawns, eager to appease the mob that wants a hanging. 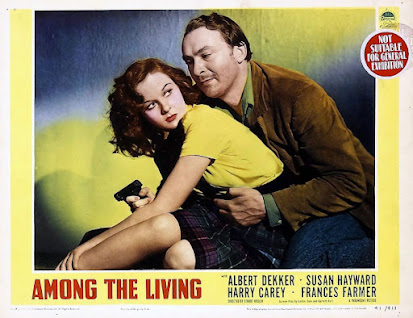 Albert Dekker gets to have his cake and eat it too, playing both the noble victim John and the criminally insane Paul. The two characters couldn't be more opposite, which offers Dekker a showcase for his acting ability. As one would hope (and expect), the movie puts both characters face to face several times, and the scenes are so well done that it's easy to believe you're looking at twins and not a special effect. It's fun to see that the same tricks that would be used in the sixties for The Parent Trap and The Patty Duke Show were fully formed some two decades earlier.
Among the Living was written by Garrett Fort--who is perhaps best remembered as a contributing to the screenplays of both Dracula and Frankenstein at Universal a decade earlier--and Lester Cole, who would become one of the Hollywood Ten during the Red Scare of the 1950s. Cole co-founded the Screen Writers Guild in 1933 and became its president in 1944. He was a leftist and a member of the Communist Party, and wrote over forty screenplays during his active screenwriting years. In 1947, after refusing to answer questions to the House Committee on Un-American Activities, he was imprisoned for ten months and added to the Hollywood Blacklist upon his release. After his release from prison, only three of his screenplays were made into films, all under pseudonyms. It's interesting to examine how his political beliefs play into the story of Among the Living, and how art would imitate life just a few years later.
Director Stuart Heisler capably helms the film, proving once again the basic constancy and dependability within the studio system. Heisler would follow Among the Living with several notable entries in the Film Noir cycle, including The Glass Key with Veronica Lake and Tokyo Joe with Humphrey Bogart. He would reteam with Susan Hayward for 1949's Tulsa. As with many of the directors from his era, he moved almost exclusively to television in the 1950s and 1960s. 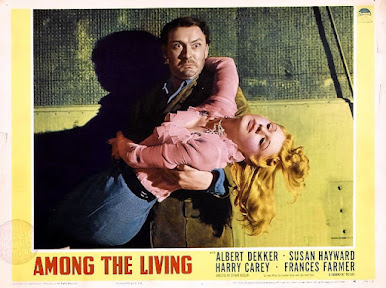 The new Blu-ray from Kino Lorber sports a nice (but not new) transfer from the Universal archive (this is one of over 700 Paramount films that were sold to MCA/Universal in 1958 for television distribution). The disc includes an audio commentary by professor and film scholar Jason A. Ney as well as trailers.
At a breezy 67 minutes, Among the Living does what it needs to do. It's a tense but enjoyable southern noir with a fun "evil twin" theme and a not-so-subtle statement about how rationality seems to disappear when people form into mobs. Fans of the spitfire Susan Hayward will definitely want to pick this one up, as will Film Noir enthusiasts, who will appreciate the different, more rural setting.
Albert Dekker Among the Living Dracula Frankenstein Garrett Fort Kino Lorber Lester Cole Paramount Stuart Heisler Studio Classics Susan Hayward Universal