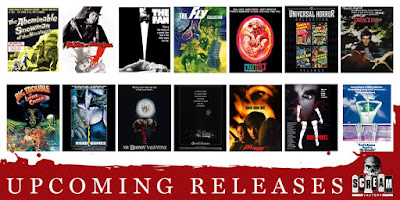 Scream Factory is present at San Diego Comic Con and has revealed a list of titles that will be headed to Blu-ray soon. The upcoming release slate includes some Hammer Films titles that will be headed to Blu-ray for the first time ever, as well as a series of upgraded re-releases and a few box sets. The release we're most excited about here at C@M is "Universal Horror Collection Vol.3," which will feature Tower of London (with Vincent Price!), Man Made Monster, The Black Cat (1941), and Horror Island! This gives us hope for a Volume 4 in 2020! Click below to see the full announcement list, courtesy of Scream Factory's Facebook Page:

• BIG TROUBLE IN LITTLE CHINA (1986) – We aim to create the definitive release of one of John Carpenter’s biggest and most beloved films in a 2-disc set. To raise the stakes, we’ll be releasing a Collector’s Edition and a Steelbook™ (both with the same content) simultaneously on the same date. Expected release: Nov or Dec 2019.

• BODY PARTS (1991) – After losing his arm in a car accident, a criminal psychologist has it replaced with a limb that belonged to a serial killer. Jeff Fahey (The Lawnmower Man) stars in Eric Red’s (Bad Moon) underrated flick. Expected Release: Jan 2020.
• DR JEKYLL AND SISTER HYDE (1971) – This gender-bending excursion from Hammer Films is quite the trip! Ralph Bates stars in this thriller directed by Roy Ward Baker (The Vampire Lovers). Expected Release: Dec 2019.
• DRACULA (1979) (Collector’s Edition) – John Badham’s slick and sophisticated telling of the legendary story flies into our midst in a 2-disc set. Includes a new transfer of the theatrical version as seen in theaters in 1979 with full color as well as the alternate director-approved version of the film created in 1991 for home video with a muted color palette. Expected Release: Nov 2019.
• THE FAN (1981) – This often-overlooked ’80s slasher film (which originally came out in theaters the same month as The Burning, Friday the 13th Part 2, Graduation Day and Happy Birthday to Me) stars Michael Biehn (Aliens) playing a deranged admirer who sets his sights on a Broadway star (screen legend Lauren Bacall). Score by Pino Donaggio (Dressed to Kill). Expected Release: Nov 2019.
• THE FLY COLLECTION – The insect-morphing franchise buzzes into town in a complete set that includes the original terrors The Fly (1958), Return of the Fly (1959), Curse of the Fly (1965) as well as the horrifying reboots The Fly (1986) and The Fly II (1989). We’re setting this packaging up just like we did recently for Critters and The Omen collections (Rigid slipcase, individual cases). Expected Release: Dec 2019.
• LET’S SCARE JESSICA TO DEATH (1971) – This creepy, atmospheric and very underrated psychological cult classic from the early ’70s makes its long-awaited Blu-ray format debut! Expected Release: Jan 2020.
• MY BLOODY VALENTINE (1981) (Collector’s Edition) – Don’t have a heart attack but “Harry Warden” is back!! ❤ The original ’80s slasher film receives more love and attention from us with a planned 2-Disc set. Expected Release: Feb 2020 — before Valentine’s Day.
• PET SEMATARY II (1992) (Collector’s Edition) – Mary Lambert’s entertaining follow up to her 1989 original film based on the Stephen King novel stars Edward Furlong (Brainscan), Anthony Edwards (Revenge of the Nerds) and Clancy Brown (The Shawshank Redemption). Expected Release: Feb 2020.
• PROPHECY (1979) – Writer David Seltzer (The Omen) and Director John Frankenheimer (The Manchurian Candidate) spin a monstrous yarn about the dangers of environmental pollution in the deep woods of Maine. Robert Foxworth (Damien: Omen II) and Talia Shire (Rocky) star with horrifying monster makeup effects by Thomas Burman (Invasion of the Body Snatchers). Expected Release: Nov 2019.
• ROAD GAMES (1981) (Collector’s Edition) – Legendary Scream Queen Jamie Lee Curtis hits the roads with Stacy Keach (The New Mike Hammer) and a serial killer against a deserted Australian backdrop. From Director Richard Franklin (Psycho II, Patrick). Expected Release: Nov 2019.
• SILVER BULLET (1985) (Collector’s Edition) – A werewolf terrorizes a small New England town in this fang-baring film written by Stephen King. Stars Corey Haim (The Lost Boys), Everett McGill (Twin Peaks) and Gary Busey (The Buddy Holly Story). Expected Release: Dec 2019.
• UNIVERSAL HORROR COLLECTION VOLUME III – Another round of early classic horror films are on tap with Tower of London (1939), Man Made Monster (1941), The Black Cat (1941) and Horror Island (1941). Expected Release: Dec 2019.
All releases are Region A for U.S. and Canadian Territories.
Also announced tonight: More Exclusive-to-Scream Factory NECA© action figures are coming soon!
• NIGHT OF THE DEMONS – Last year we unleashed the limited-edition “Angela” character… but we all know she needs her friends to party with! Terrifying “Suzanne” and “Stooge” demons are ready to let loose and will be sold as a 2-pack with an expected release before Halloween 2019.
• THE SLUMBER PARTY MASSACRE – The 1982 driller-killer slasher classic will see its central villain “Russ Thorn” getting the toy treatment. New Steelbook packaging plus a new 4K scan of the film is also in the works. Expected release date: Jan 2020.