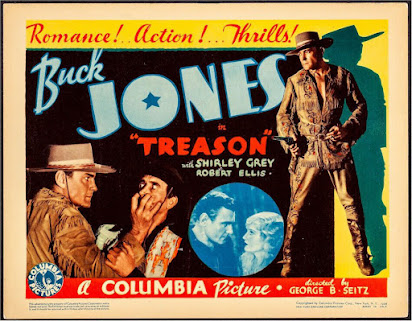 Once again, a Buck Jones B-movie from Columbia surpasses all expectations. In 1933's Treason, our lantern-jawed hero infiltrates a band of southern militants to bring an outlaw to justice. Set against the backdrop of real history, I was entirely unprepared for the moral and ethical complexity of this story. Joan Randall (Shirley Grey) and her band of confederates are riding through Kansas in the immediate wake of the Civil War, apparently wreaking havoc wherever they go. After they burn a town to the ground, Jeff Connors (Buck Jones) goes undercover to bust up the band from the inside. In order to do this, he has to look like the real deal, so he has himself branded with a hot iron to complete his disguise. While the camera doesn't show the actual skin-searing act, it lingers on his face as the smoke rises from his chest for longer than necessary. Pre-Code cinema, man.

This was the first time in the film that I realized I was watching something outside the traditional "let's stop those outlaws" B-western plot. As the film continues, what once seemed like a fairly black and white concept gets increasingly complicated. I don't plan to spoil the film for you, dear reader, but suffice it to say that not everything is quite as it appears and someone is going to hang...but is it the right person? What price must be paid for being caught up in violence, even if you didn't--to quote Billy Joel--start the fire? These are mighty big questions for a dirt-cheap oater such as this one and the film can't really resolve them with the same panache that later Hollywood productions could--especially those from the vaunted 1950s heyday and pinnacle of the genre--but it matters that they tried. Screenwriter Gordon Battle (in what I believe is his only movie script) knew that it would be bad business to have our hero riding off into the sunset after not having set everything wrong to right again, but he keeps it pretty touch and go for as long as he can. Add in some solid action scenes that include a fist fight on the back of a careening stage coach and you've got yourself a wham-bam 63 minutes.

Like so many of the early Columbia B-westerns, all original studio branding has been stripped away to make way for new "Gail Pictures" credits that were added when this movie was sold for television distribution. No complete, unaltered version is believed to survive. I watched Treason as part of VCI's Buck Jones Double Feature Volume 3 where the film shares a disc with 1933's The California Trail. Quality is watchable, though not exceptional, probably taken from a 16mm TV print. Buck Jones has quickly become one of my all-time favorite B-movie heroes. He's got the look, the physical strength, and the commanding authority that I want from my cinematic heroes. I'm eager to explorers of his films.