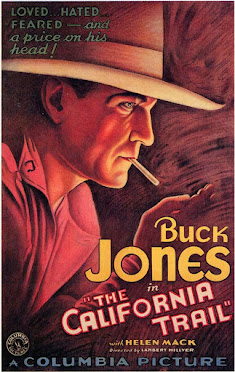 I'm still relatively green when it comes to Buck Jones movies, but I like what I see. With so many horse-bound heroes vying for the attention of B-movie audiences, not all of them had the screen presence to be stars. In a dime-a-dozen marketplace, more than a few lacked  presence, but that's not the case with good ol' Buck. Considering his career started back in the twenties before pictures had sound, it says something that he had both leading man charisma and a commanding way with dialogue that served him well as the silents transitioned into talkies. Maybe part of what makes me appreciate Buck so much, aside from his lantern jaw and exceptional physical condition--more uncommon than one would expect for a man of action--is how comfortable he seems to be on screen.

With so many western plots being recycled over and over, The California Trail rolls out a plot that feels both refreshing and substantial. In 1830s Spanish California, a crooked mayor and Commandant are starving their town with the goal of bamboozling them out of their land so they can run their own little empire. They even plan to bring down the governor! Enter Santa Fe Stewart (Buck Jones) as a good guy who is bringing food to the starving town. When his caravan is ambushed and he's thrown in jail, it becomes more than a humanitarian effort; now it's personal.

There's a Robin Hood element to the proceedings, but the Spanish California setting is reminiscent of Zorro, too. We still get the requisite staples of the western genre, but there's enough novelty here that The California Trail doesn't really feel like so many of the other B-westerns of the time. This one stands out and has a unique voice. Also, because it's 1933, there's a lot of the early thirties charm that I love so much. Helen Mack plays the female lead and lights up the screen with an ease characteristic of the pre-Code era. Also, kudos to Stuard Galbraith IV's review over at DVD Talk, who points out something truly remarkable: Helen Mack eats a fly on camera. Yes, it's true! My viewing copy was so dark that I missed it and had to specifically look for the moment, but during a scene between Buck and Helen a fly lands on her mouth, crawls inside, and is never seen again. She stumbles for a moment, repeats a word, and then goes on as if nothing had happened. Not so surprising for an ultra-cheap horse opera shot in a mere nine days, but impressive nonetheless. Ah, the things they did for art.

Like scores of other Columbia Pictures titles, this film was sold to television in the 1950s, where it was unceremoniously stripped of all traces of its true origins and given a new credits sequence hailing it as a Gail Pictures feature. The original, unaltered version of The California Trail is presumably lost, with only the augmented version surviving. As previously noted, my copy of The California Trail is not exactly a gold standard visual presentation. It's one of two films featured on VCI's Buck Jones Double Feature Volume 3 (the other film on the disc is Treason, also from 1933) and is probably sourced from a dated TV tape (which was probably sourced from a 16mm print). Reviews of Sony's own MOD DVD speak of a stellar presentation, so it looks like an upgrade purchase is in order.