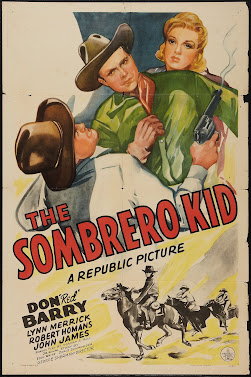 The misnomered 1942 western The Sombrero Kid is not unlike many other poverty row B-films of the era in that it does little more than serve up the bare minimum of action and story that will still qualify as a movie. The thrill for this fan, though, is in the magic of the production machine itself and in slotting another piece of the great puzzle into place.

The thin plot concerns Marshal Thomas Holden (Robert Homans) and his two sons Tommy (John James) and Jerry (Don "Red" Barry). There are actually a few twists here, so I'll avoid the details and say that what begins as a traditional effort to clean up a town and bring an outlaw (the fantastically-named Smoke Denton, in this case) to justice morphs into something else as the film progresses. By the mid-way point, the movie is more about justice and revenge, with Barry getting to play a character who walks the line between good guy and anti-hero. The requisite shootouts and saloon brawls are here, of course, but this movie is also concerned with a conspiracy that adds a whodunnit mystery element to the standard proceedings. Interestingly, living doll Lynn Merrick softens up the screen, but isn't the love interest of our main character. 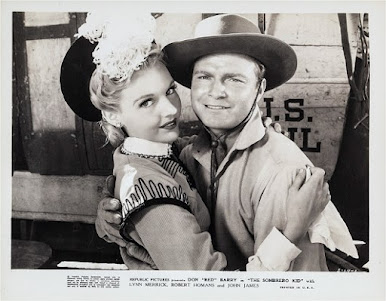 The film was made by Republic Pictures, so fans know what to expect. Don "Red" Barry didn't have red hair, but he'd picked up the nickname a few years earlier when he starred in The Adventures of Red Ryder serial back in 1940...yes, that Red Ryder, the same one that lends his name to Daisy's air rifle, first manufactured the same year as Republic's 12-part chapter play. Insert "shoot your eye out" joke here. Barry also never wears a sombrero in the film, nor is his nickname ever really explained, but I suppose the producers can be forgiven for leaning into the "kid" naming trend. Don Barry made a whole slew of oaters at Republic from 1939 until 1946. In 1949, he moved to Lippert and kept right on working. The "Red" monicker followed him all his life.

The screenplay comes from Norman S. Hall who is something of a hero for serial fans, having contributed to classics like Secret Agent X-9 (1937), Radio Patrol, Red Barry (starring Buster Crabbe, not Don "Red" Barry, confusingly), Buck Rogers, and the aforementioned Adventures of Red Ryder serial, followed by Jungle Girl and Dick Tracy vs. Crime Inc. The film's director, Golden Boot Award recipient George Sherman, helmed dozens of westerns and also co-directed one of my favorite Robin Hood B-movies, Bandit of Sherwood Forest, which sees Cornel Wilde in the title role. 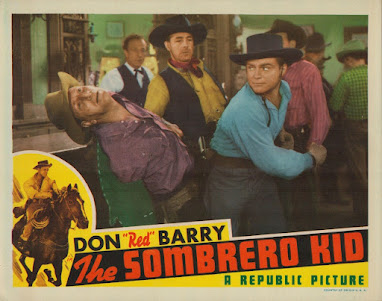 Like most of its brethren, The Sombrero Kid is middling entertainment, but provides an hour or less (53 minutes, in this case) of old-fashioned thrills and spills on a Saturday morning. I screened the film via VCI's "Cowboy Heroes Vol. 2" double feature DVD, which is burned on demand and is sourced from a very watchable print with decent contrast and no missing frames or dropouts.