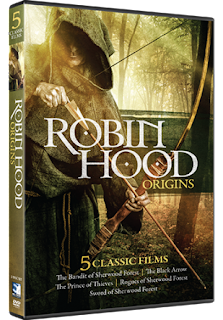 The good folks at Mill Creek Entertainment have just released a fantastic new DVD collection entitled "Robin Hood Origins," which collects five classic swashbucklers from Columbia Pictures on two discs. Being a huge fan of all things Robin Hood, this release has been high on my priority list since I first mentioned it my video "Robin Hood: A Cereal At Midnight Celebration," and I'm happy to report that the package does not disappoint. I've watched all five movies and will write a little bit about each one below.

The Bandit of Sherwood Forest (1946) finds actor Cornel Wilde (the noir classic Road House) starring as Robert of Nottingham, aka the son of Robin Hood. This movie could be a direct sequel to the 1938 Errol Flynn classic, The Adventures of Robin Hood because it seems to inhabit the same world. Time has passed and Robin Hood and his merry men have grown older, so the torch of justice is passed to Robin's son Robert. Cornel Wilde is great as a rakish hero with a hint of mischief. With a budget of around one million dollars and filmed in Technicolor, this is by far the most ambitious of the five films presented here, and it's also my favorite of the bunch. It's competently directed by Henry Levin (1959's Journey to the Center of the Earth) and B-movie director George Sherman, though The Bandit of Sherwood Forest is a first class production all the way. Every time I watch it, I like it even more. 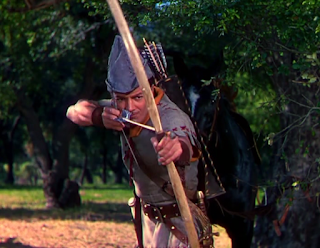 The Prince of Thieves (1948) finds Jon Hall (from Universal's Invisible Agent and The Invisible Man's Revenge) as a Robin Hood so tall and beefy that he almost looks like a professional wrestler. Unfortunately, Hall's physical stature doesn't translate to on-screen appeal, but the movie overcomes the lack of charisma from its lead by throwing in lots of action. Maid Marian is played by the strikingly-beautiful actress Patricia Morison (Dressed to Kill), but she has little to do. This film is based on a book by Alexandre Dumas, the author of The Three Musketeers, so there's plenty of swashbuckling adventure to fill our short running time of 72 minutes. Interestingly, several of the plot elements used in this Robin Hood entry pop up again much later in 1991's Robin Hood: Prince of Thieves, which notably borrows its subtitle from this film. unlike The Bandit of Sherwood Forest, this movie was not filmed in Technicolor, but rather with a method called Cinecolor, which has much more muted results. because of the lower budget, dull colors, and brief running time, The Prince of Thieves plays more like a B-movie, especially in the third act, which has some of the most insane violence I've ever seen in a movie made during the 1940s. The entirety of the last fifteen minutes of the film are devoted to one fight after the other, including multiple melees and brawls that leave a huge body count. It's impressive and actually makes this movie quite a bit of fun to watch. 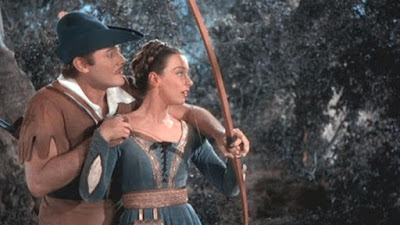 The Black Arrow (1948) isn't a Robin Hood film at all, but it's still welcome here for reasons I'll explain in a moment. The story, based on a tale by Treasure Island author Robert Louis Stevenson, takes place in the 1500s at the close of the War of the Roses and finds our hero returning from battle to discover that he has been thrust into a struggle against tyranny, deception, and a smear upon his family's name. It's a Robin Hood film in all but name, with plenty of sword fights and arrow action. This is another short one at only 74 minutes, and it's filmed in black and white. What makes it such a valuable addition to this collection (aside from the fact that it's clearly a mid-budget swashbuckler made by one of the major studios) is the fact that this movie has been incredibly hard to find until now. It only made its DVD debut in 2010 as part of the Sony Pictures "Columbia Classics By Request" line, which consisted of burned-on-demand DVDs similar to Warner Archive's DVD business model. By Mill Creek including the film in this collection, fans of the film now have the ONLY pressed DVD edition of this movie in existence.

Rogues of Sherwood Forest (1950) is the most confusing of the entire bunch. John Derek, perhaps most (in)famous for his relationship with Bo Derek and for directing the controversial movie Bolero, stars as the son of Robin Hood, much like Cornel Wilde in The Bandit of Sherwood Forest. However, this is where things get tricky: even though we're introduced to a much older group of merry men, everything else about this tale follows the same pattern as the classic story. After the death of Richard the Lionheart, King John is strangling the people of England with high taxes. The people need a hero, and Robin, Earl of Huntingdon, rises up with the freedom fighters who helped his dad years ago. However, there's also a romantic subplot with Maid Marian, who apparently also had a relationship with his father. It's unclear why the filmmakers decided to go with the "son of a legend" angle if they were going to keep so much of the standard Robin Hood myth. That's not to say that this movie is bad, because it's not. The film plays fast and loose with the story, and we're encouraged to just relax and enjoy the Technicolor adventure for 80 minutes, which is easy enough to do. There's another treat in the form of Alan Hale Sr. (father of Alan Hale, Jr., aka The Skipper on Gilligan's Island) in the role of Little John for the third and final time. Hale had played the same part in a 1922 silent film and again in the classic 1938 movie starring Errol Flynn. Seeing him reprise the role for a final time is a lot of fun. 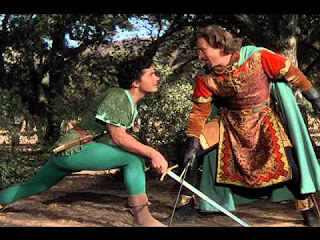 Sword of Sherwood Forest (1960) is special for a few reasons. First, and most importantly, it's a Hammer film directed by Terence Fisher, the man who brought so many of that studio's hits to fruition. Second, it's the only time I'm aware of that an actor from a Robin Hood television series would reprise his role in a motion picture. Richard Greene, the star of the television hit The Adventures of Robin Hood, which ran from 1955-1960, is the exact same character in this movie as on the small screen. In fact, Hammer went out of their way to tie this movie directly into the TV show, though they replaced every other actor from the TV production. In many ways, it's a tie-in by lip service only, but it's impossible to deny that this movie, which debuted just months after the conclusion of the series, is intended to be connected. Another reason to love this movie is that is co-stars Peter Cushing, the legendary horror and genre film actor, as the Sheriff of Nottingham. Cushing plays the role with cold relish, bringing the same magnetism here that he does to the Dracula and Frankenstein films he made under the Hammer banner.

Being an English production, Sword of Sherwood also benefits from the location photography of real forests and landscapes located within Great Britain. Whereas the four Columbia-produced studio pictures included in this set all filmed at Ray "Crash" Corrigan's ranch in California, this movie instantly has credibility by using actual English countrysides and real castles for location photography. There are also uncredited roles of note, including Desmond Llewelyn (the original "Q" from the James Bond film franchise) and Oliver Reed, who almost outshines Peter Cushing by chewing the scenery and playing his role so over-the-top that he becomes the focal point of every scene he's in. This movie also features one of the few platinum blonde Maid Marians that I can remember. Just like all the other movies in this set, Sword of Sherwood Forest is a short affair, coming in at only 80 minutes, but it uses its running time well to tell a story that somehow still feels epic on scope.

With a retail price of only $14.99 for five hard-to-find films culled from the Golden Age of Cinema, Mill Creek has given us a fantastic release that has already established itself as one of my favorites of the year. All five films are in their original aspect ratio (1:37 full frame for the Columbia studio films and 2:35 anamorphic widescreen for the Columbia-distributed Hammer film), and they all look very good on DVD. Each one has something unique to offer and shows how different approaches to the same story can yield a variety of satisfying results. Mill Creek should be commended for once again rescuing movies that dangled on the verge of obscurity and presenting them to us in an incredibly-accessible way.