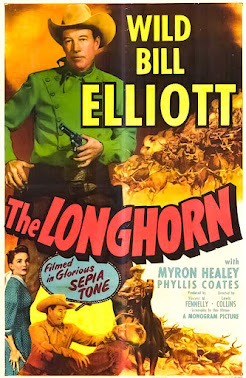 The 1950s were transformative for the western genre. Television was changing the game forever, with quality visual storytelling at home now competing with theatrical films for the attention spans of viewers. On the big screen, westerns were growing in scope (literally and figuratively) and taking on more complex nuances. This was even felt in the B-westerns of the era as the white hats and black hats were giving way to more complicated emotions, situations, and relationships. In short, the western was growing up.

1951's The Longhorn embodies this shift. This Monogram picture stars "Wild Bill" Elliott, one of the many western heroes who had established himself as a B-movie hero in the 1930s and 1940s. His tenure at Columbia Pictures in the late 1930s had given way to a stint at Republic, but his late-career work at Monogram feels different from the simple plots that revolve around stopping bad guys with fists and six guns. 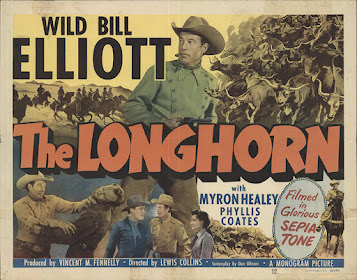 A scrolling text prologue at the start of The Longhorn explains that cattlemen of the west faced hardship when the longhorn steer dropped in value. Once the mightiest and hardiest of all cattle, this animal was fetching such low value that many ranchers and cowboys were struggling to survive. Faced with obsolescence, Elliott (Jim Kirk in this film, though there's no Starship Enterprise here) plans to cross-breed two types of cattle to make a better beef. He must travel the dusty trails and dangerous terrain west to buy the cattle he needs, but what he doesn't realize is that his traveling companion (Myron Healey) is a not-so-trusty sidekick and has been double-crossing him the whole time. Caught in the middle of these cowpokes is Phyllis Coates (future Panther Girl of the Kongo), a strong woman for a new decade. She's there to soften the screen, sure, but she's not the plaything of either man and represents a tough woman who can fend for herself on the long cattle drive. She's no damsel in distress.

Without going too deeply into the plot, The Longhorn feels a lot more concerned with themes of integrity, loyalty, and dogged determination than it does with stopping a mustache-twirling villain. Sure, there are bad guys in this film, but none of them have mustaches, they don't all wear black, and at least one of them embodies a moral complexity that flies in the face of the typical B-western characterization of previous decades. Monogram isn't a name that casual movie fans will recognize, but their reputation on Poverty Row among cinephiles and B-movie buffs is well-known and loved. 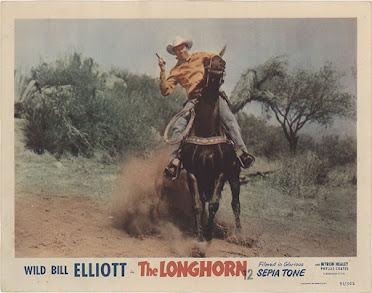 Screenwriter Daniel B. Ullman wrote a slew of these low-budget westerns around this time. When Monogram Pictures fully morphed into Allied Artists, a more respectable, refined A-picture studio, he refreshed this screenplay in 1956 for another version of the same story, this time under the title Canyon River and starring George Montgomery and Peter Graves. This time in Cinemascope and with color by Deluxe, Canyon River may be better remembered for good reason, but I'm glad we also still have the 1951 Monogram quickie (shot in seven days) starring Bill Elliott.  Sidebar: Ullman successfully transitioned to television when greener pastures awaited his screenwriting talents; over the next few decades, he contributed scripts to Bonanza, Gunsmoke, The Fugitive, The Wild Wild West, and later Mission: Impossible, Kung Fu, Mannix, SWAT, Wonder Woman, The Bionic Woman, Starsky and Hutch and The Incredible Hulk. 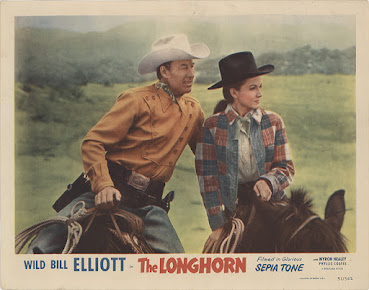 The Longhorn was released on November 25, 1951, which is a mere two days after Phyllis Coates made her debut as Lois Lane in the theatrical film Superman and the Mole Men. Later, she'd reprise the role on the weekly The Adventures of Superman television series during its first season. For viewers who hit the theaters that weekend in 1951, it must have felt like Phyllis was everywhere.

The Longhorn has been released on DVD by both VCI Entertainment and Warner Bros. under the Warner Archive banner.