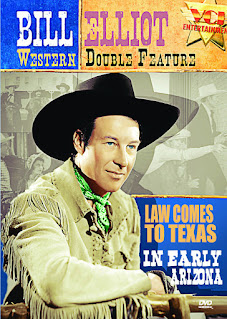 I've got a serious soft spot for westerns. The 1950s was the pinnacle of the genre, buoyed by the post-World-War-II crisis of conscience and gray morality of a society trying to come to terms with the things it had seen and done, and that's the decade with the most complex, rich characterization, not just in westerns, but in other genres, too.

But I'm also a huge fan of the 1930s cinema and the seemingly-endless supply of oaters that poured out of the studios and onto the matinee screen. For every big-budget 1930s western, there seem to be dozens of low-budget cheapies that lack the nuance, scope, and budgets of later westerns but that compensate for their cheapness with economy and simplicity. Bad guys wear black, good guys wear white (or at least white hats) and decency always triumphs over villainy. Running times were short and character development was even shorter, with most of the "acting" feeling as stiff as trail jerky.

Here's the thing, though: thirties westerns are approachable. Forgettable, sure, but approachable, and these dime-a-dozen pictures made matinee idols out of a crop of cowboys who anchored countless films during the decade and beyond.

VCI has long been a friend to these films and has just released a whole cavalcade of classic western cheapies inhabited by the likes of Tex Ritter, Charles Starrett, and Allan "Rocky" Lane, but for this review, we're going to focus on their "Bill Elliott Western Double Feature" which stars none other than "Wild Bill" Elliott, a cowpoke who starred in nearly 300 films spanning the silent era all the way through the late 1950s and was even Red Ryder himself. Little Ralphie, eat your heart out. Elliott (real name: Gordon Nance) had earned the "Wild Bill" nickname from his starring role in 1938's The Adventures of Wild Bill Hickok, and it was too catchy not to stick. 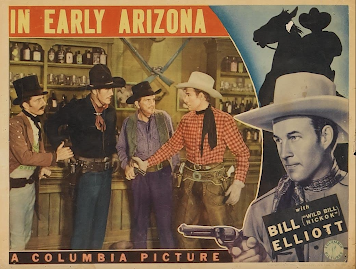 Our double bill kicks off with 1938's In Early Arizona, which travels some of the most well-trod territory in the genre by paraphrasing the tale of Wyatt Earp and Tombstone, Arizona. Instead of Earp, Elliott plays Whit Gordon, a do-gooder who has been sent by a marshal to bust up the crime that's blazing unchecked through legendary western town of Tombstone. In the span of 53 minutes, Elliott brawls his way through the bad guys before the final confrontation with corrupt officials, which culminates with a nice tracking shot up main street before the big showdown.

1939's The Law Comes to Texas is even simpler, with Bill Elliott playing a lawyer named John Haynes who faces off against a crooked judge that has set up his own little empire. The most memorable aspect of this 56-minute adventure is that Elliott must go undercover to infiltrate the inner circle of the bad guys and destroy them from within. How does he do this? With a fake mustache.

These two movies signaled the end of the trail for screenwriter Nate Gatzert and director Joseph Levering, who wrote and directed both features, with The Law Comes To Texas serving as the final outing for Levering and only one more screenplay to come from Gatzert. Levering, who had started directing in 1914, would never again helm another film, but he did contribute to the screenplay for the 1940 serial adaptation of Terry and the Pirates. 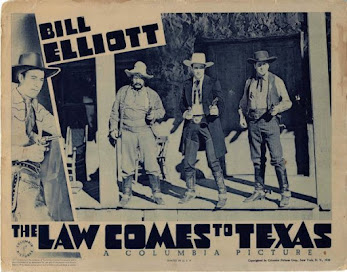 Both films were made by Columbia Pictures, still very much a studio with one foot in Poverty Row, though you'll find no evidence of their origins here. At some point, over 100 Columbia films--including these two--were sold to Hygo Television Films for TV distribution in the 1950s. The opening Columbia credits were snipped away and replaced by Hygo's own credits, marketing the films as "Gail Pictures," often with errors in names or spelling. These 100+ pictures now only survive in their compromised format, and the master copies in the Columbia archive are the Hygo Television Films versions, with the original, uncut presentations presumably lost forever. Blow "Taps" on the bugle, Buford.

VCI releases can lack polish (Elliott's name is misspelled on the cover), but the distributor should be praised for their continued efforts to bring movies such as these to disc. After all, what is the audience size for no-budget 1930s westerns in the bright future of the 2020s, what with our flying cars and jetpacks? As such, it's worth pointing out that both films total less than 2 hours and are presented on one DVD-R disc, but I had no playback issues whatsoever. The film transfers themselves are likely very, very old, presumably from a tape source made for TV broadcast decades ago. Still, contrast is fair and the image and dialogue are clear, even if the well-worn film prints that were used are far from immaculate--the "cigarette burns" to signal the reel changes are intact. There are some visible splices and some scratches, but these blemishes actually add character to these old westerns, rather than detract. As long as I've been covering movies, people have been telling me they don't want certain movies to be 'too clean" and I think this is what they mean. The visual presentation of both films is on par with the kind of quality that most of us who tuned in to Sunday afternoon westerns will remember from the rabbit ears days. In short, this is far from reference quality, but miles better than some of the third-generation TV dubs that pad many of those 50-movie sets that occupy the bottom shelf.

TV seems to be the theme of this review, and that's appropriate enough because these are exactly the kinds of movies that television would replace when it took over entertainment in the 1950s. With running times under an hour, it's best to think of these short movies as being like episodic television. Neither of the two films here are actually connected story-wise, though they share members of the cast as well as the writer and director. When these adventures were made, they were meant to be nothing more than a diversion. Character development is nonexistent, but they still make for brief entertainment on a lazy afternoon and feature solid action and better-than-average cinematography and pacing. Keep your eye on this Bill Elliott kid...he's a star.