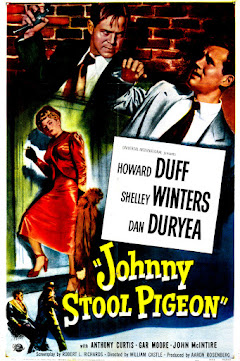 Johnny Stool Pigeon sits alongside films such as T-Men and The House on 92nd Street as a noir that presents itself as being "ripped from the headlines" and inspired by the actions and bravery of real government officials. In this tale, a U.S. Treasury agent, played by Howard Duff (1950's Shakedown) pulls a convict (the always-excellent Dan Duryea) out of Alcatraz to help him infiltrate a drug smuggling ring. As these two go deep undercover to earn the trust of the bad guys, they'll cross paths with both the crime boss's dame (Shelley Winters, The Raging Tide) and a mute thug (Tony Curtis in one of his earliest film roles). Complicating things even further, career-criminal Duryea doesn't intend to play nice with Uncle Sam and vows to be nobody's stool pigeon. With the whole operation riding on his willingness to go legit and play along, things are about to get messy.

Directed by exploitation king William Castle (Hollywood Story, House on Haunted Hill), this is a routine Universal genre movie programmer that is greatly improved by its cast and location. Set in San Francisco-- arguably the city most associated with noir due to its steep hills, looming bridge, foggy streets, and the rocky prison Alcatraz visible on an island surrounded by dark, deadly waters--the location always provides both high production value and thematic gravitas. The cinematography, lensed by Maury Gertsman (Singapore), aids the foreboding tone. 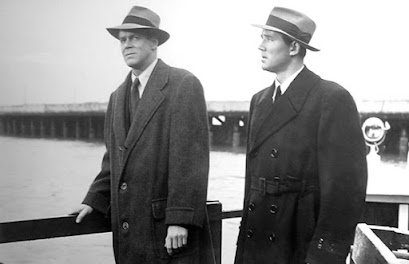 But a movie is only as good as its cast, and this one is stacked with Universal contract actors from the era. The studio had some fantastic stock players, some of whom appeared in as many as three or four pictures a year. Howard Duff was still a relative newcomer, having only just made his big-screen debut two years earlier alongside Burt Lancaster in Brute Force. In the span of just a few years, Duff was given a lead-actor push in many genre films for the studio, starring in westerns and crime films that showcased his unique qualities. He exhibits a detachment and dislikability that works well for those kinds of parts, as we're not always sure that he's on the side of the angels. In his films from this era, sometimes he's the good guy and sometimes he's a cautionary villain, but he's always ambiguous in his approach. Dan Duryea was in the middle of a seven-year contract with Universal International, which must have been quite a boon for the journeyman actor at the time. His frequent co-star Shelley Winters (Larceny, Winchester '73) is equally outstanding and frequently brings more to her parts than exists on the page by injecting a level of vulnerability and heartache into roles that don't always have three dimensions. John McIntyre plays a character with some duality (I won't spoil anything here), and he's yet another veteran actor that is always a joy to watch and who makes it all seem so effortless. Finally, a 23-year-old Tony Curtis (billed as Anthony Curtis) appears in what was only his third on-screen performance. He has no lines--in fact, his character is mute--but the kid's a star. 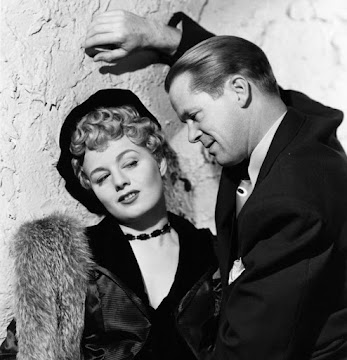 Johnny Stool Pigeon is yet another Universal picture that has been MIA on the home media format for decades, and may not have even been released on VHS. Now that has been corrected as the film makes an HD debut via a brand new 2K scan as part of Kino Lorber's Film Noir: The Dark Side of Cinema VI. In short, the film looks great. The sole special feature on the disc is an audio commentary by film historian Jason A. Ney, but cinephiles and old movie buffs will be absolutely thrilled to have this obscurity on disc in top-notch quality. 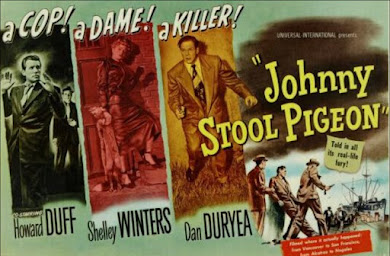 Johnny Stool Pigeon is yet another testament to the competency of the studio system. It doesn't break any new ground and is one of dozens--if not hundreds--of Universal films that have flown under the radar in the decades since it first played in theaters. And yet, there's a lot to enjoy and appreciate, from the wonderful San Francisco location to the cast of heavy hitters. At a brief 76 minutes, it's a tightly-wound package of noir themes and atmosphere and definitely comes recommended for its target audience.