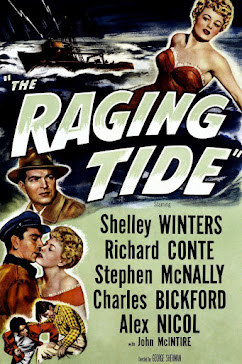 The gun man and the sea? What starts as a routine film noir/crime film quickly turns into something else. We open on the cold, foggy streets of San Francisco as gunfire rings throughout the night. Gangster Richard Conte has just plugged a rival and has to get out of town quick. Easier said than done since all the planes, trains, and automobiles are at a standstill. Desperately hopping onto a small fishing boat, he finds himself on the open water with a grizzled sea captain and his first mate. Meanwhile, back on land, the cops get really close to Conte's tough-as-nails girlfriend, played by Shelley Winters. 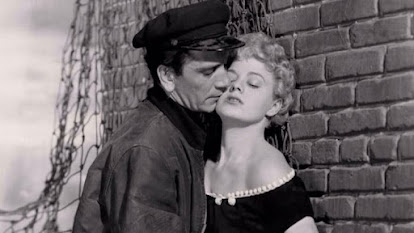 The tonal shift here is quite striking as the routine Frisco noir morphs into something that I'm less interested in, but that is admittedly well acted, directed and lensed. Richard Conte (The Hollywood Story) gets to sink his teeth into the role of a bad guy who finds new purpose and meaning on the open sea. I'm not used to seeing him in traditional dramas that deal with themes of self-improvement and overcoming one's demons. Other notable character work comes from John McIntire (Psycho), Alex Nicol (The Screaming Skull), Charles Bickford (1954's A Star is Born), and Stephen McNally (Criss Cross). The script from adventure novelist Ernest K. Gann (The High and the Mighty) gives everybody here a full arc with no character making it to the credits unchanged. The proceedings are overseen by workman director George Sherman, who cranked out over a hundred B-features and programmers during a twenty year span before moving to television.

The real star here is Shelley Winters (The Night of the Hunter), who appropriately takes top billing here. I'll leave it to others to debate what her "prime period" was, but I find her early work from the 1940s and 1950s to be extremely powerful. During this era, Winters was young and beautiful, but also dark and vulnerable, and maybe even a little sad. This potent cocktail made her a perfect choice for the kind of roles she excelled at during these years. In this film, she's Conte's gun moll, a role that--on the page--doesn't have all the layers that she brings to the part. After the murder, Conte was supposed to come to her, but things didn't work out that way and now he's gone. The cops lean on her hard, but she's tougher than anyone could have imagined while also being absolutely heartbroken and worried. Winters would eventually end up in a string of campy roles (TV's Batman, Cleopatra Jones, to name just a few), but during this era, the actress was the turning out incredible performances in pretty much everything she was in. 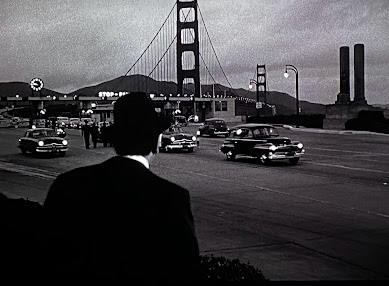 The film is included in Kino Lorber's Film Noir: The Dark Side of Cinema VI and has been given a beautiful new 2K scan. It appears--as far as I can tell--that it makes its home video debut with this release. The disc also includes a commentary by David Del Valle and producer Miles Hunter. I'm personally more interested in The Raging Tide because of its actors and the mid-century San Francisco setting, which is captured beautifully by cinematographer Russell Metty (The Stranger, Touch of Evil, Spartacus), than the story itself, which quickly leaves behind its film noir premise in favor of something much less stylized and more traditionally dramatic. That being said, I'm a massive fan of Universal's Golden Age catalog and I'm so glad that these films are finally being restored and released on disc for new audiences to discover some 70 years later. For this old movie fan, the joy of discovery is endlessly rewarding.