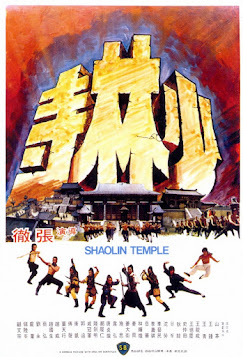 The secrets of kung fu and enlightenment lie within the protected walls of the Shaolin temple. After years of barricaded doors, the monks within are once again taking on new students, prompting hopeful applicants to come from far and wide. With the fearsome Qing Dynasty seeking to conquer and kill those who are sympathetic to Shaolin beliefs and practices, these new students will soon find that gaining access to the temple is just the beginning of their trials.

Shaolin Temple is a prequel to a 1974's Five Shaolin Masters and it succeeds so magnificently that I thought I was watching the films out of order. Released almost two years to the day after 1974's Five Shaolin Masters, 1976's Shaolin Temple tells the entire backstory of the fated monastery through the eyes of the disciples who studied there at the feet of the masters. It's an origin story that's deeply rooted in actual Chinese history, a quality that co-writer and director Chang Cheh was not necessarily known for bringing to his films. This is also the end of Chang Cheh's "Shaolin Cycle" of films that focuses on real Chinese folk heroes and the Southern styles of kung fu. The movies in the cycle are: Heroes Two, Men from the Monastery, Shaolin Martial Arts, Five Shaolin Masters, The Shaolin Avengers, and Shaolin Temple. Some also consider Disciples of Shaolin to be a part of this cycle.

For this finale, David Chiang and Ti Lung reprise the exact same roles that they brought to the screen in Five Shaolin Masters while other performers from the earlier 1974 film appear in different roles. Many Shaw Brothers stars are here: Wang Lung-wei, Chi Kuan-chi, Wang Chung, Liu Yung, and Alexander Fu Sheng, who is quickly becoming my favorite martial arts actor not named Bruce or Jackie.

The film opens with a group of hopeful students waiting outside the temple in the pouring rain. We learn that they've been there for days with no food or water. Finally, a select few are permitted to enter and are immediately given seemingly-menial tasks. One student is sent to the kitchens to tend the fires. Another told to spread long trails of paper over a series of pointed stones. Another student, who is a gifted gymnast, is given weights to attach to his legs and told to jump repeatedly. What these students don't realize is that they're learning discipline, strength, and skills that they will soon employ when their new home falls under attack by the Emperor's army. Everyone that ever marveled as Mr. Miyagi taught Daniel-san to wax the car and paint the fence in The Karate Kid will smile knowingly at the secret training that's happening in Shaolin Temple.

Most of the two hours are spent on character development as we watch our heroes struggle, grow, and learn qualities like patience and honor while pondering life's biggest questions. Consider this philosophical line: "Winners can't win everything. Losers won't lose it all." Thanks, Shaolin masters! There aren't as many battle scenes in the film as one might expect, with most of the story focusing on the growth of our characters. One of the big action set pieces that does occur about half-way through the movie revolves around the trial of the "Wooden Man Alley," which is a chamber filled with death. The alley itself is the stuff of Shaolin legend and pops up in many Asian films, with various interpretations in different movies over the years. We will probably never know whether or not it really existed within the temple or what it may have looked like if it did, but I love seeing how it's been depicted in martial arts cinema. Most of the action and traditional Chang Cheh violence and gore is reserved for the final act when all hell breaks loose and the temple must be defended against thousands of Imperial troops. It's big, bloody, and especially engaging because this is what our main characters have trained for throughout the entire film.

Shaolin Temple is included in Arrow Video's Shawscope Vol. 1 Blu-ray box set and--appropriately-- shares a disc with Five Shaolin Masters; just like that film, the HD transfer is sourced from a remaster that was conducted between 2003 and 2007 by Celestial Pictures, the rights holders of the Shaw Brothers catalog. Mandarin and English mono audio tracks are included, and as with every film included in the Shawscope Vol. 1 set, the subtitles have been newly translated for greater accuracy. Extras include alternate U.S. and Hong Kong opening credits, Hong Kong, German, and reissue trailers, and in what may be the most cryptic inclusion, a standard definition (upscaled to 720p) version of the movie which is presented for posterity as it apparently represents the closest accuracy to how the film looked in theaters in 1976. Other than the color of the opening credits text, I'm not sure what the differences are.

I haven't watched all of Chang Cheh's Shaolin films in order, but Arrow's one-two punch of Five Shaolin Masters and Shaolin Temple is quite an experience and stands as a high point for historical martial arts movies made during the 1970s. The performances--both physically but also in terms of acting--feel more mature than earlier entries. Furthermore, Cheh's eye to historical detail and sympathy for the legendary heroes of Shaolin make this one more powerful than its brethren. The mix of drama, action, and pathos make for a truly cinematic experience that satisfies on all levels.