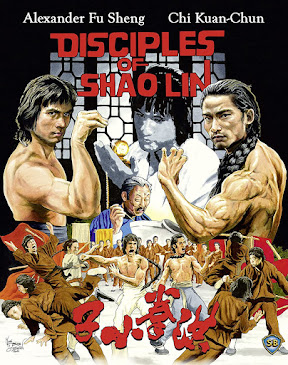 Chang Cheh was one of the most famed and prolific directors of martial arts cinema, composing ballets of violence and blood-spattered brawls in a way that was both artful and pleasing to the masses. 1975's Disciples of Shaolin represents something of an anomaly in his ouvre in that it's more of a drama than outright battle film, though when the action arrives, the gore isn't far behind.

At the center of the film is Alexander Fu Sheng, a young star (emphasis on star) who embodies all of the cocky confidence and swagger of Bruce Lee infused with the comedic timing and charm of Jackie Chan. In this film, he plays a poor traveller that has come into town seeking his brother, who works at the local textiles plant. He soon learns that the company his brother works for is at war with another rival textile factory who seeks to overtake the business and force a monopoly. The authorities are no help, and therefore it's up to the workers to fight back and stop this hostile takeover. Fu Sheng's brother, played by Chi Kuan-Chun, has renounced his kung fu and patiently sits out every conflict, so Fu Sheng brashly steps up to the challenge and quickly becomes a hero to his community. However, his success in fending off the bad guys goes to his head and he quickly becomes over-confident and arrogant. Pride cometh before the fall...

Expectations are important and should be set accordingly for this film. Disciples of Shaolin has plenty of action, but it's not a wall-to-wall splatter fest like some of the other offerings from the Shaw Brothers studio, such as The Chinese Boxer; instead, this feels more like a dramatic morality play about hubris while also including political statements about the struggles of the Asian working class of the 1970s. Truthfully, while the film opens with a stylish demonstration of Shaolin techniques performed by Sheng Fu against a yellow and red backdrop, we don't actually see any fighting until around 30 minutes into the film. It will be even longer before we see things really cut loose. Patience is rewarded, though, as the film concludes with a brutal action scene that is filled with blood and destruction. Filmmaker Chang Cheh was aware of the censorship risks of his very violent battles and gallons of blood, and therefore switches the color cinematography to sepia-toned black and white not once, but twice during the film. Quentin Tarantino would homage Chang Cheh and such black and white action scenes in his own film, Kill Bill Part 1.

Fu Sheng is an amazing talent and carries much of the film as his brother pensively avoids every fight until he can stand aside no longer. This is near the beginning of Fu Sheng's meteoric rise to fame, and he would become a bigger box office draw with each subsequent film. Tragically, after recovering from numerous stunt-related injuries including a broken neck, he died after a car accident in 1983. Reportedly 30,000 people attended his funeral, which echoed Bruce Lee's funeral a decade earlier. Unfortunately, Shaw Brothers films didn't have much of an afterlife in Asia after their initial theatrical run, sometimes playing on a double bill as a B-feature in the years after their debut, but more often than not, simply slipping into obscurity. Most of them were not issued on video tape during the VHS era, and it was only with the rise of DVDs in the early 2000s that many Shaw Brothers movies found their way to home media. The result of this oversight is that two generations completely missed the Shaw Brothers superstars of the 1970s, and Fu Sheng never got his due among martial arts movie fans in Hong Kong because they didn't see his films. It's only now that we're able to reassess the careers of some of the brightest talents of that era.

Disciples of Shaolin arrives on Blu-ray from 88 Films sporting an HD remaster sourced from the original 35mm camera negatives and looks wonderful. Colors are bright and detail is crisp. Audio choices include the original Mandarin mono 2.0 with newly-translated English subtitles or an English mono 2.0 dub. On-disc extras include a new audio commentary by Asian cinema experts Mike Leeder and Arne Venema, a second new commentary by film journalist and author Samm Deighan, and an on-camera interview with Shaw Brothers star Jamie Luk, conducted by Frederic Abroisine. Both commentaries are informative, with the Leeder/Venema track being breezy and conversational as two Hong Kong movie buffs compare notes and tackle the big questions: did Chang Cheh have a foot fetish? Is this really a Shaolin movie, or is it masquerading as one? Is it Hong Kong cinema if it was shot in Taiwan? Fun stuff, and never dull. The sleeve contains a reversible art wrap featuring the original 1975 poster art on one side and new artwork by "Kung Fu Bob" O'Brien on the other side. The trailer is also included.

Buyers of the first pressing get the "Limited Edition" version, which includes a slipcase with the new art by The Visceral Martial Arts Cinema of Chang Cheh and An Interview with Actor Jamie Luk by Matthew Edwards, International Bright Young Thing: A look back on The Disciples of Shaolin and its charismatic star Alexander Fu Sheng by Andrew Graves, and Finding Fu Sheng by Karl Newton. A reversible foldout poster with both original and new artwork is included in the limited edition, as well.

As I'm fond of saying, we're living in the best of all possible futures for film fans, and I'm not alone in this appreciation. Karl Newton agrees in his essay, stating that these films were completely absent from the market for decades, even in their own domestic territory. With the current collector trend leading to easy access and unprecedented quality and supplements, fans can now hold the films in their hands, study the talent involved, and watch them over and over, all for just a little bit more than the price of a single movie ticket. Thanks to 88 Films and their commitment to bring movies like Disciples of Shaolin to collectors and cinephiles in both the U.K. and in the U.S.A., movies such as this will never be forgotten again.