Between John Wayne's first major splash on cinema screens as the lead in Raoul Walsh's The Big Trail in 1930 and his earliest collaboration with John Ford for the 1939 movie Stagecoach, "The Duke" spent the better part of the decade cutting his teeth and paying his dues in a dozens of no-budget B-westerns. These movies were short in length and lean on plot, but offered cheap thrills while asking nothing of their audiences in return. Later, after the rise of television in the 1940s and 1950s, these quickies would be supplanted by the small screen adventures of The Cisco Kid and The Lone Ranger, which audiences could watch from the comfort of their living room and offering viewers--mostly kids--a dose of cowboy action without much concern to plot or character development. But in the days before television, motivated producers made Saturday matinee idols out of serial heroes and able horsemen. 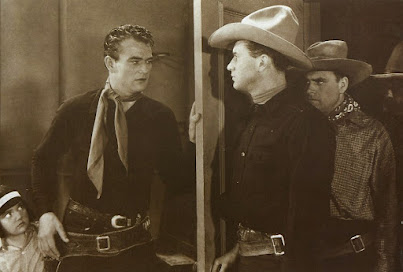 1934's 'Neath the Arizona Skies is one such film to feature a young John Wayne, who was in his mid-twenties at the time. The plot of this 53-minute adventure is thin: oil has been struck on Native American land and those who occupy that property are due for a payout. John Wayne shows up in line with his surrogate daughter, the rightful heir of a $50,000 payment, but they have to find the little girl's birth father  first. The mission: find the dad and protect the kid as a bunch of tough guys chase them with dollar signs in their eyes.

The performances are mostly bad across the board, but the actors were probably never given more than one take. These movies were made in just a few days, so efficiency was critical. George "Gabby" Hayes appears in a sizable part and is uncredited in the original credits, but added to a re-release poster years later. John Wayne is likable as a father figure willing to do whatever it takes to protect his young ward. His distinct drawl has already been firmly established, but the movie does little to hint at the icon that he would become during the coming years. 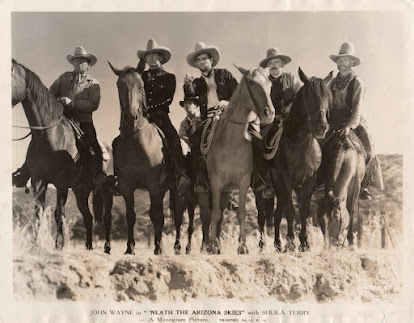 Information on this film is virtually non-existent, but I've been able to uncover a few scant details. 'Neath the Arizona Skies was made by Lone Star Productions, a Poverty Row company founded by Paul Malvern, a former child acrobat for the Ringling Bros. Circus who found Hollywood work as a stuntman during the twenties and early thirties. He had been working for Monogram when he spearheaded Lone Star, which was active between 1933 and 1935 and with the resulting output being produced by Monogram. Malvern produced 24 movies with John Wayne, with 16 of them falling under the Lone Star banner. Most of the films made for the company were directed by Robert North Bradbury, a prolific filmmaker who helmed movies for Poverty Row stalwarts that also included Republic, Tiffany, Supreme, and PRC. Bradbury is also the father of Bob Steele, a cowboy and noir picture star whom we've talked about here in the context of the film Giant from the Unknown.

This film was actually directed by Harry L. Fraser, a writer and director who penned the screenplays for the 1943 Batman and 1944 Captain America serials and who shot countless low budget westerns during this period. Like so many other similar productions, 'Neath the Arizona Skies was filmed in the popular scenic areas of Placerita Canyon and Santa Clarita, California. 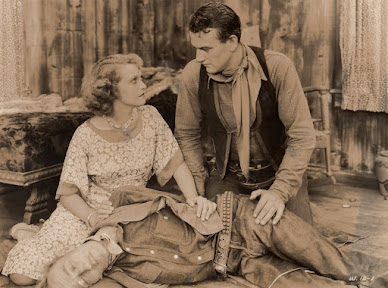 Like so many of its brethren, this film has fallen into the public domain, meaning that many cheap multi-movie packs have included a third or fourth generation badly duplicated copy of the film. To be frank, the public domain version of this movie is so blown out and blurry, it's hard to tell what's happening in some scenes. Thankfully, Olive Films licensed an actual studio-owned print from Paramount for a Blu-ray several years ago and the differences are night and day. While the Paramount print is not without scratches and damage, it's a significant improvement in clarity and contrast over the public domain version and is worth seeking out. No extras are included.

'Neath the Arizona Skies is forgettable and impossible to distinguish from the many other films that John Wayne made during this time, but for fans of the genre looking to watch an entire movie in the time that it takes to view a single hour-long episode of a television show, it offers mindless and inoffensive entertainment. On a grander scale and more appreciably, it's also one of the many steps in John Wayne's journey to stardom.