Brand new on Blu-ray, Giant from the Unknown hails from that golden age of backyard B-movies both wonderful and bizarre, the fabulous '50s! As film historian Tom Weaver notes in his excellent (and quite funny) audio commentary, there were so many low-budget monster movies made during the 1950s that the market was not merely saturated, it was actually destroyed by being over-served. Lucky for us, these films still exist and often retain every bit of the charm and imagination that can still cause curious cinema searchers to seek them out and enjoy their many wonderful qualities. This is exactly the sort of fun and fanciful mid-century genre picture that Cereal At Midnight was born to appreciate.

The plot of Giant from the Unknown in brief: an archaeologist (Morris Ankrum, Earth vs. The Flying Saucers) and his daughter (Sally Fraser, War of the Colossal Beast) are on the trail of a 500-year-old Spanish conquistador named Vargas, aka The Diablo Giant (played by 6-foot-eight actor Buddy Baer). They enlist the aid of a local researcher (Ed Kemmer of Space Patrol) to help them navigate the local terrain. Trouble rears its head when people start to turn up dead--specifically with all their bones pulverized--and the local sheriff (B-movie cowboy star Bob Steele) thinks the murder is someone local, a person everyone knows. What nobody counted on was the fact that Vargas is still alive, preserved through some miracle of the regional soil, and this giant is out for blood! 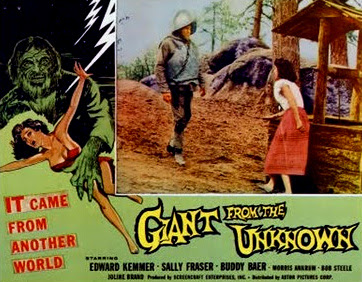 Giant from the Unknown stands head and shoulders (get it?) above many of its peers for several reasons. For one thing, it shot on location about 100 miles east of Hollywood in the Big Bear region, bringing tons of natural scenic ambiance to the film. Beautiful trees, lakes, and natural formations substitute the usual backlots and familiar suburban Los Angeles County terrain that was well worn in other backyard B's. The climax of the film even features a snow storm, which feels about as far from the typical southern California atmosphere as possible.

The cast also benefits the film tremendously. Both Ed Kemmer and Sally Fraser had previously appeared together as husband and wife in a similar monster film, The Spider (recently released on Blu-ray by Shout! Factory). They're no strangers to this sort of thing, nor is "Bullet" Bob Steele, a man who made a name for himself in quickly-made pictures going all the way back to his screen debut in 1920 alongside his twin brother in The Adventures of Bob and Bill. By the time Steele landed on the TV series F Troop, he had over 200 acting credits on his resume. Even in this 1958 film, he carries the gravitas of a seasoned veteran. 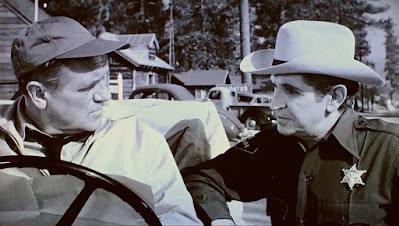 Finally, the monster make-up design of Vargas, The Diablo Giant is created by the legendary Jack Pierce, the man gave life to the the instantly-recognizable appearances of Frankenstein's Monster, The Mummy and The Wolf Man for the iconic Universal horror films of the 1930s and 1940s. While Vargas won't be featured on any Halloween card any time soon, it's nevertheless a successful design that conveys the crust of the ages on our savage survivor's face.

The Film Detective has made a name for themselves by restoring films that are either independent or in the public domain and don't have major studio budgets or initiatives behind them, and this stands as one of their greatest achievements to date. As a blurb on the Blu-ray cover proclaims, Giant from the Unknown has been "resurrected from the original camera negative" with a "new 4K transfer!" The results are nothing short of stunning. Indeed, it looks as though no expense has been spared, and it's doubtful the film looked this good when the very first print was struck in 1958. Also worth noting, this Blu-ray is a factory pressed disc, which is something this distributor has been venturing into lately. It adds to the feeling of quality that accompanies all aspects of this release. 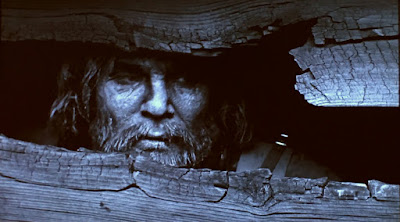 This lavish treatment has also been carried over to the supplements, which consist of TWO audio commentaries --the aforementioned Tom Weaver track as well as another with one of the film's co-stars, Gary Crutcher, who plays a character named Charlie Brown (good grief!). The always-outstanding Ballyhoo Motion Pictures has been tapped for two new featurettes/interviews, one with film historian C. Courtney Joyner (whose knowledge of genre film seems boundless), another with Gary "Charlie Brown" Crutcher. Together, they total about 25 minutes and are packed to the gills with the history of this production and the tales of those who were involved. The theatrical trailer is included, as well as a booklet packed with photos and liner notes written by Tom Weaver. Have we mentioned how much we love a booklet?

Such bells-and-whistles treatment for an independent fifties monster movie such as this is unexpected, but it's also very appreciated. Genre movie fans take note, this is certainly one worth adding to your shelf. This Blu-ray presentation (there is also a DVD) strikes the perfect balance between outstanding restoration and picture quality, robust supplements with actual substance and historical value, and collector-friendly bells and whistles like a booklet and an appealing black Blu-ray case that will stand out to genre fans. Here's hoping that the forthcoming release of Hercules and the Captive Women from The Film Detective continues this commitment to quality!

Giant from the Unknown is now available, and comes HIGHLY recommended.