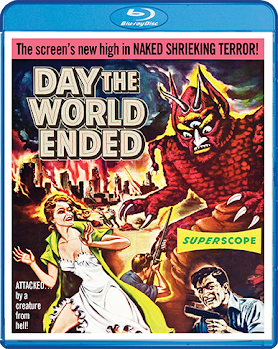 1955 was a big year for Roger Corman. He made his directorial debut (the western Five Guns West) and proceeded to direct or co-direct no less than four films that year, culminating with Day the World Ended at the end of '55. There are no shortage of post-nuke movies to come out of the Cold War paranoia of the 1950s, but this is Corman's mid-fifties take on the same subject matter that would soon be revisited in movies like The Last Man on Earth and The World, The Flesh and the Devil.

In the film, humanity has largely eradicated itself with the atomic bomb. A few survivors remain in the post-nuclear fallout; some huddle together, trying to isolate themselves away from the dangers of the outside world and the mutants that wander the ruins. Others travel in search of shelter, provisions, and maybe finding others who can help. 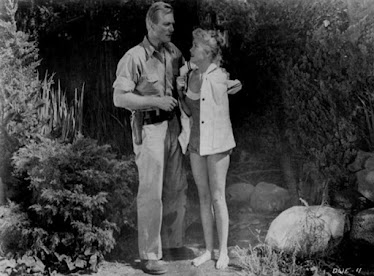 It's here that our story begins and we meet our small cast of characters. Paul Birch (Queen of Outer Space, The Man Who Shot Liberty Valance) is a patriarchal figure with a big house, a Geiger counter, and a daughter he'd do anything to protect. That daughter is played by Lori Nelson (Hot Rod Girl, the Ma and Pa Kettle movies) and is watched over not just by her dad, but by the strapping Richard Denning, a barrel-chested hunk of man meat who seemed contractually obligated to take his shirt off in many of his movies (The Creature from the Black Lagoon, Beyond the Blue Horizon, at least a half a dozen more). Mannix himself, Mike Connors (billed as Touch Connors) and a former stripper played by Adele Jergens (Armored Car Robbery) are a couple of wandering survivors looking for a place to hide out. Connors is a tough guy with a gun that he likes to wave around, and he's willing to blow away anybody that gets between himself and safety. He may even blow away a few people just for breathin' funny. I'm saying he's a mean mutha-shut-your-mouth. Finally, Raymond Hatton (from the Three Mesquiteers B-western series, which ran for over 50 films) is Pete, a man who has been caught in the fallout and begun to mutate. 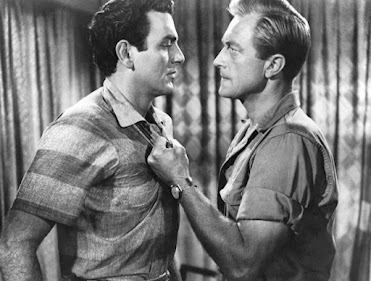 I won't belabor the plot any more than that, since Corman's monster movies aren't often known or celebrated for their storylines. Suffice it to say, nobody really gets along (thank goodness for us the viewers) and things go sideways really quick. Mike Connors--I mean Touch--wants to kill everybody, including his girlfriend. Paul Birch would just as soon nobody had found his house in the first place, and would prefer to carry on surviving with only his daughter and the strapping Tarzan-type fella that he wants to father her babies.

Oh, and then there's the mutant monkey thing that lives just over the nearest ridge and keeps getting closer. The movie wisely presents the creature in shadow during the first half of the movie, but they get pretty bold with it as we get closer to the climax, lingering far too long on what appears to be a costume made out of papier-mâché and chewing gum. You can see what they were going for, especially in the poster art (more on that in a second), but Corman's posters were often better than the movies themselves, and the monster suit sadly falls pretty short of its concept. Then again, that's part of the charm! It actually looks pretty good in wide shots. 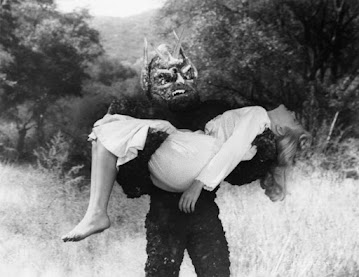 At only 79 minutes (fifties movies, I love you), things move too quickly to get bored, and hey, who could get bored during a Corman movie? There's a reason we celebrate this guy 70 years after he first started working in film. The cinematography is competent, the pacing is breezy, and it's a blast to see Mike Connors over a decade before he would become the swinging detective Joe Mannix for 8 seasons. Corman's movies have a charm to them, and though they're not good, per se, they're always fun (which is usually the point). This is no exception, and makes a great programmer for any B-movie marathon. With a budget of nearly $100,000, this is one of Corman's more ambitious films from this period, and it was picked up by American Releasing Corporation, which would later become American International Pictures (long live AIP!) who released it on a double bill with The Phantom from 10,000 Leagues. Could you imagine seeing that drive-in double feature in December of 1955? Merry Christmas indeed! 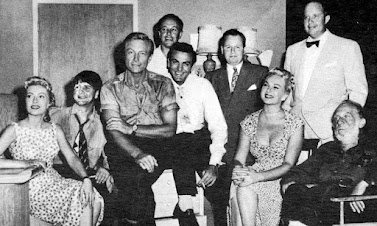 Shout Factory owns the Roger Corman catalog and has been slowly releasing some of his more...shall we say niche titles as limited edition website exclusives under their Scream Factory banner. Day the World Ended arrives on Blu-ray with a new 2K scan from a fine grain element and looks flippin' fantastic. There are two special features, led by a 39-minute documentary called Roger Corman: Godfather of the A's, which is an exceptional look at Corman's early career and covers how he got started in Hollywood, became a producer and then a director, and brought films like Attack of the Crab Monsters and Day the World Ended to life. The feature is excellently produced and directed by Constantine Nasr (author of Roger Corman: Interviews), and features an extensive interview (shot in 2018) with Corman himself, who was still sharp and well spoken at the time of the recording.

But wait, there's more: not listed on the packaging, the press info, product listing, or even the extras menu on the disc is a new commentary by Tom Weaver! If you're one of the lucky 1500 customers to purchase this disc, don't miss Weaver's contribution, as he's always fun and knowledgable, and presents segments from his numerous audio interviews with cast and crew during his tracks. The package also includes a foldout poster of the film's excellent artwork that I immediately framed and hung up within Casa de Midnight so that I could look at Mannix and a monkey monster any time I want to.

Shakespeare it ain't, but Day the World Ended is a fun B-movie from a legendary filmmaker and starring wonderful character actors. For the monster movie aficionados among us, the flick has never looked better, thanks to a magnificent new restoration by Shout Factory. The included documentary is unexpected, but most welcome. Day the World Ended won't be everyone's cup of tea, but for those who enjoy this particular flavor, it comes recommended.