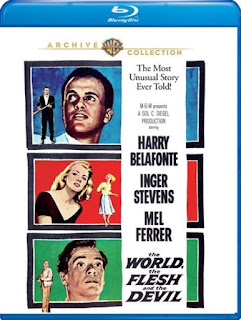 One of the many joys of discussing and reviewing pop culture through Cereal At Midnight lies in the simple aspect of discovery. I make the argument as often as I can that we're living in a golden age for cinema preservation; so much of our entertainment past is now at our fingertips, and in quality that blows away every previous release. With this unprecedented access comes the thrill of discovery, especially those pieces of work that might have fallen under the radar in the years and decades since their first appearance.

Prior to screening 1959's The World, The Flesh and The Devil via Warner Archive's fantastic new Blu-ray, the movie could not have been further off my radar. I honestly am not sure I'd even heard of it before. But through the discovery of the movie comes the joy of finding something that I've connected with and am so happy to have experienced.

On the surface, The World, The Flesh and The Devil would make a perfect double billing with The Last Man on Earth, a 1964 film starring Vincent Price as the last living human being on the face of the planet. In truth, I now see how The Last Man on Earth (based on the story I Am Legend by Richard Matheson) might very well have been influenced on screen by this 1959 predecessor. 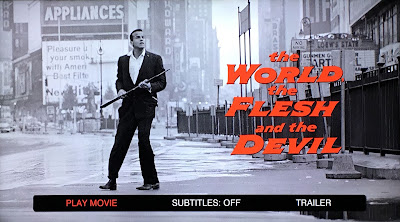 At the center of The World, The Flesh and The Devil lies Harry Belafonte, an actor and singer/songwriter who many will know from his Calypso-tinged hit "The Banana Boat Song" aka "Day-O," as featured at length in Tim Burton's Beetlejuice. However, Belafonte's career owed to a folksy-but-progressive outspoken demeanor. The song in question, "Day-O," is a Jamaican work song about the men on the docks who tally the bananas and want to go home after a long night of labor. The melody and presentation of "The Banana Boat Song" is upbeat and jaunty, but the subject lies in darkness.

The premise of the film is haunting. Belafonte plays Ralph, a miner who finds himself trapped underground after the mine he's operating in collapses on top of him. He survives the accident, and has enough food and water to last for days. During his ordeal, he communicates with the surface world via signals sent through an old mining telephone. He can't hear words, but he can hear pulses and taps. He can also hear the digging of a rescue operation underway. Days later, the taps go silent, and so does the sounds of digging. Ralph realizes that no one is coming to save him and his fate lies solely in his own hands. Frantically digging for survival, he manages to make it back to the surface world, only to discover that everything has changed.

Civilization is gone. There are no people, not anywhere. Buildings are empty. the radio has gone silent. Worse, there's not even the slightest trace of a human anywhere. It's like an episode of The Twilight Zone, but Ralph can't turn this story off with the push of a button. He boards a small boat and directs himself toward New York City, where he discovers that some cataclysmic event has occurred while he was underground. Cities were evacuated, but it seems that there's also been a global nuclear disaster, leaving billions dead.

Or nearly alone. Ralph discovers two other survivors: Sarah, played by Inger Stevens (Hang 'Em High), and Benson, played by Mel Ferrer (Brannigan). These three people--two men and one woman--may represent all that is left of humanity, and it's that very humanity that this film is concerned with. The themes of race relations and the male/female dynamic fall under the microscope here, with Belafonte's character obviously deeply attracted to Sarah, but a lifetime of social rules and laws still hang over him, even though there's not a soul around to enforce them. Belafonte plays the conflict wonderfully, with strength, dignity, and righteous indignation, though he is constantly tempted to stray from his convictions.

The film doesn't waste Belafonte's success as a recording artist, either. I wouldn't label the film a musical, but it does take several occasions to serve up a few solo musical numbers that somehow fit into the film organically. In one instance, Belafonte accompanies himself on guitar, singing about how lonely he is. When he repairs the facilities at the local radio station, once again we're given the opportunity to see what his character can do musically. For me, these musical moments never feel inauthentic, and actually seem to work well within the film's structure. In this way, the movie is akin to King Creole, an early film starring Elvis Presley that found plausible ways to have the young star sing and showcase his multiple talents.

The poster for The World, The Flesh and The Devil hails the movie as "The Most Unusual Story Ever Told." That's a fairly accurate description, as this movie is quite unusual. We have a cast of three, set against the barren streets of an abandoned New York City, achieved through clever filming techniques and the use of matte paintings. Part of the film's running time is concerned with depicting the allure and loneliness of a city--let alone a world--without people. But the majority of the movie is spent exploring these three people themselves. What drives them, their yearnings, their hang-ups, their foibles? This is ultimately a movie about race, gender, sex, and violence. Quite an accomplishment considering it was made in 1959 by MGM under the studio system and features, at its core, an interracial love affair.

The film is adapted from two sources: a novel called The Purple Cloud by M. P. Shiel, and a story called "The End of the World" by Ferdinand Reyher. The movie was directed by Ranald MacDougall, who also adapted the story for screen. MacDougall had much larger success as a screenwriter than a film director, ultimately only helming six movies. His scripts for Mildred Pierce, Cleopatra, and Dark of the Sun (co-written under a pseudonym) more adequately exhibit his talents. As such, The World, The Flesh and The Devil might be forgiven for being perhaps a bit "on the nose" and for trying to distill and wrap up complicated issues by the time the end credits roll. The biggest criticism I can level toward the film is its lack of subtlety as it makes its final point clear, made even more head-scratching by how much subtlety has gone before.

Warner Archive's Blu-ray of The World, The Flesh and The Devil offers a fantastic visual presentation. In short, the black and white cinematography is gorgeous, and comes courtesy of a new film restoration that seems to have done wonders for this movie. I also have to compliment the powerful, emotional score from composer Miklos Rozsa, which Warner Archive has chosen to accompany the menu on the disc. I found it impossible to hit play until the beautiful musical queue had finished.

The premise of the film is one that is open to a variety of interpretations. The 2014 television series The Last Man on Earth, starring Will Forte, Kristen Schaal, Mel Rodriguez, and January Jones, is virtually identical in almost every way, but plays the premise for comedy while exploring the same race and gender politics. Considering the time in which The World, The Flesh and The Devil was created, the earnestness and anger that seems to lie just beneath the surface is entirely understandable. This is a film with a lot on its mind, wrapped in a fantastical, escapist package that still manages to hit us where we live.