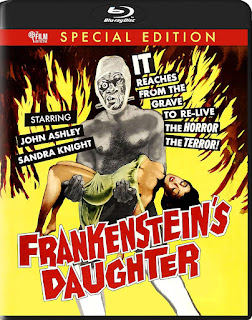 Richard E. Cunha's 1958 low-budget creature feature gets a 4K restoration and deluxe Blu-ray treatment thanks to the fine folks at The Film Detective!

Hailing from the Golden Age of the drive-in, Frankenstein's Daughter serves a ghastly gourmet of cinematic cheese for fans to feast upon. The plot finds the famed Dr. Frankenstein's grandson picking up the gruesome work of his ancestor in 1950's Los Angeles. For starters, he's developed a serum that turns people into hideous, invulnerable freaks, and one of the first scenes in the movie gives us lead actress Sandra Knight (the future Mrs. Jack Nicholson) in gruesome makeup effects that accompanies the title screen. Not content to stop there--wouldn't be much of a villain if he did--our evil scientist is also constructing a monster made from the parts of dead people that will obey his every whim and kill on command. If dead bodies don't supply themselves, he's more than willing to help people to their demise so he has fresh parts.

There's a lot here for a monster kid to love, including an uncommon amount of gore for the fifties. Acid in the face and mangled bodies with limbs barely held together by thin strings of viscera must have been quite shocking in 1958. Because this is essentially a Poverty Row picture (distributed by Astor pictures, made for 60,000 dollars and shot in six ten-hour days), it gets away with so much more than any traditional Hollywood movie could ever have hoped. Even Hammer Films, which was making a name for itself at the same time with technicolor blood and bountiful bosoms, must have felt a twinge of jealousy at how far this film was able to push boundaries because of its non-studio distribution. 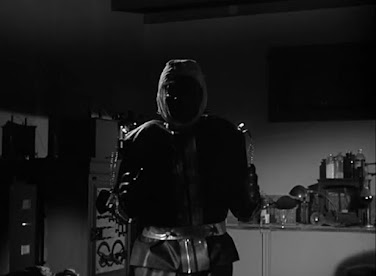 Frankenstein's Daughter is also tremendous fun because of the cast. The aforementioned Sandra Knight will be known to fans of Thunder Road, The Terror, and the Vincent Price vehicle Tower of London. Male lead John Ashley was a teen heartthrob who rose to fame in a string of American International Pictures beach movies and would go on to a second career as a producer, bringing life to everything from exploitation movies to The A-Team in the 1980s. 1957 Playboy Playmate Sally Todd wiggles seductively as a blonde bombshell that plays with fire and gets burned. Truly, the filmmakers know what they've got here and spend as much time as possible presenting shots of Todd walk from one location to another. All we're missing is a raucous score that give us a brassy "ba-bomp ba-bomp" with each step.

As is often the case in these cheaper productions from the 1950's and 1960's, the cast also consists of the offspring of Hollywood's most famous faces. Robert Dix, son of Golden Age star Richard Dix, had previously appeared in Forbidden Planet and Forty Guns, and would find regular work as a character actor, often on television. Genre movie fans will recognize Dix from multiple Al Adamson productions. Harold Lloyd, Jr., the son of the silent film icon, has an early rock musical number ("Special Date") in the movie with Page Cavanaugh and His Trio. 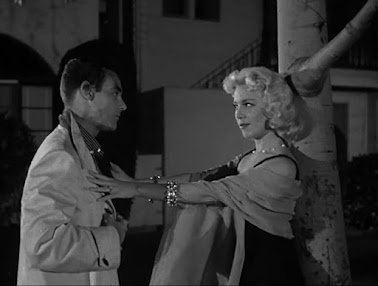 The hidden benefit of any low budget movie such as this one is the glimpse that it provides of real life during the time in which it was made. Sure, this is a cheap drive-in movie about monsters with makeup effects made from hair gel and tissue paper, but in between the action, we get a look at real life in 1958. For example, multiple scenes were shot at co-producer Marc Frederic's actual house in West Los Angeles. The fashion, the culture, the music, the architecture...B-movies are a time capsule, often filmed outside of studios and using off-the-rack clothes, well-loved furniture, and populated by real people, not career actors. As Wheeler Winston Dixon argues in his book Lost in the Fifties: Recovering Phantom Hollywood, glossy studio pictures presented an illusion and a myth, but low budget productions told it like it really was.

The new Blu-ray from The Film Detective is a thing of beauty, and a must-own for monster movie fans, or fans of fifties cinema in general. The distributor's "Special Edition" Blu-rays are positively packed with features, and this is no exception. First up is a commentary by Tom Weaver which also features audio interjections from filmmaker Larry Blamire. Note: The package erroneously lists two audio commentaries, but I only see one. The special features screen also lists the commentary as being from Jason A. Ney, but that's an error as well; Ney provided commentary on another Film Detective disc: The Amazing Mr. X. A lifelong monster kid and archivist, Weaver always provides fun and insightful commentaries. His love of the material consistently shines through, but he also recognizes these kinds of movies for what they are and never glosses over their shortcomings or failures. Truly, it's those very shortcomings and failures which make these old monster movies so much fun. Weaver also contributes an essay on Frankenstein's Daughter and the short B-movie career of Richard E. Cunha in a full color booklet that comes with this disc. 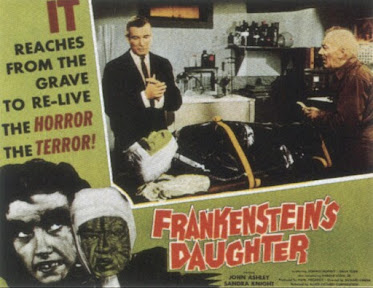 The always-impressive Ballyhoo Motion Pictures provides two features that are worth the price of admission alone. The first is the most staggering: in the early 1980s, Tom Weaver sent a list of questions to director Cunha, seeking info about the origins of the films and as much behind-the-scenes information as Cunha could remember. Cunha responded--not with a few sheets of paper with his answers, but a video tape with upwards of an hour of footage in which he went into great detail answering Weaver's queries with wit, self-deprecating humor, and lots of personality. This incredible treasure is presented as sort of a found-footage discovery, and the fact that we get to find out so much information directly from Cunha, shot on videotape in the director's own video store, is a real gift. Richard E. Cunha: Filmmaker of the Unknown is one of the coolest features I've seen in a long while.

The other Ballyhoo feature is John Ashley: Man from the B's, a new ten-minute documentary in which the always-engaging C. Courtney Joyner discusses the arc of John Ashley's career, from AIP movies to The A-Team. Joyner's ability to recall names, dates, and events from Hollywood history remains as staggering and impressive as ever. If you're anything like me, you'll find yourself jotting down film titles and seeking out DVDs that don't exist yet. Hot Rod Gang with Gene Vincent, when will you get a restored disc release?

The Film Detective's new 4K restoration of Frankenstein's Daughter is a thing of beauty. The level of attention, preservation, and education that exists on these Blu-ray releases makes them essential, and this latest release is no exception. This reviewer is also glad to see the work of Cunha getting so much love and attention from The Film Detective. It wasn't all that long ago that they released Cunha's first feature, Giant from the Unknown, in a beautifully-restored package. One can't help but hold on to hope that the other films from Cunha's brief foray into drive-in cinema (She Demons, Missile to the Moon, and maybe even The Girl in Room 13) might be a possibility for similar treatment in the future. Until then, this is a fun movie presented in stellar quality and loaded with extras. Highly recommended.