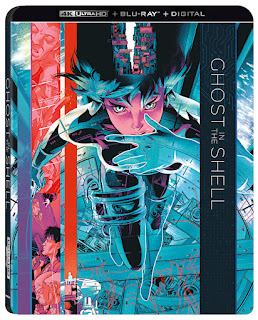 Lionsgate has just announced that Ghost in the Shell, one of the most influential and popular anime films of all time, will be coming to 4K UHD/Blu-ray/Digital on September 8th to celebrate its 25th anniversary. The 4K presentation will feature Dolby Vision and Dolby Atmos, and will feature artwork from pop illustrator Martin Ansin as well as brand new bonus material. This release is being touted as "the most definitive Ghost in the Shell package to date."
Special features include an audio commentary featuring Mary Claypool (Animation Writer and English Language Scriptwriter), Eric Calderon (Animation Producer and Writer), Richard Epcar (Voice of "Batou"), and Charles Solomon (Animation Historian and Critic) as well as two new bonus featurettes: "Accessing Section 9: 25 Years into the Future" and "Landscapes & Dreamscapes: The Art and Architecture of Ghost in the Shell."
MSRP is $22.99
4k anime Ghost in the Shell Lionsgate UHD