He-Man, She-Ra, and Voltron Headed Back to DVD From Universal! 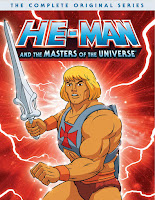 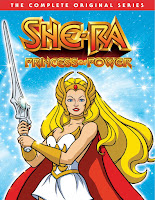 By the Power AND the Honor of Grayskull! After years of being out of print and commanding ever-increasing prices on eBay and other second-hand seller markets, Universal Pictures Home Entertainment will release box sets collecting the entire series of both He-Man and the Masters of the Universe and She-Ra: Princess of Power on October 1st! All 130 episodes of the original He-Man series will be presented on 16 discs and all 93 episodes of the original She-Ra television series are presented on 12 discs. Both box sets include a ton of extras, and both sets will contain the feature-length documentary Power of Grayskull: The Definitive History of He-Man and the Masters of the Universe as well as the feature film He-Man and She-Ra: Secret of the Sword and the hour-long He-Man and She-Ra Christmas Special.

But that's not all!

One week earlier, on September 24th, Universal Pictures Home Entertainment will also release the complete original Voltron: Defender of the Universe television series! The new 14-disc box set will feature all 124 episodes of both Lion Force Voltron and Vehicle Force Voltron (long out of print) and also contains the feature film Voltron: The Fleet of Doom.

All three of these shows are dear to Cereal At Midnight, and are shining examples of what made the 80s such a colorful, fun, bizarre time in which to grow up. You can see the original BCI/Eclipse pressings of the complete He-Man and She-Ra series on the shelves in the background of the majority of our videos, and we also have the entire Lion Force series of Voltron. We talked about each one of these shows in our popular 80s cartoon video, and you can also find out why these shows still mean a lot to us as adults in our video about the Satanic Panic of the 1980s. Even though we already own the majority of everything detailed in this announcement, we will be picking up these DVDs once again to send a message to Universal Pictures Home Entertainment that there is still a market for these shows and people still buy physical media.

Though all three of these shows have been released before, this is the first time that it's being done by Universal Pictures and not a third party. All previous releases were licensed out to distributors like BCI, Mill Creek, and Anime Works. While licensing has changed in the last few years, and all three of these shows now reside in the Classic Media/Dreamworks catalog (a Universal company), it still says a lot that we aren't seeing these coming from independent distributors, but from Universal themselves. We'd like to think this speaks to the longevity and importance of these brands, even thirty-plus years after these shows first wowed kids. With the new Netflix versions of She-Ra and Voltron creating a new generation of fans, it's nice to see these shows getting respect from their parent company.

Stay tuned to Cereal At Midnight for full reviews and all breaking news/coverage for these wonderful cartoon box sets! You can find pre-order links below!

Thanks to @popstreamarchive on Instagram for breaking the news!