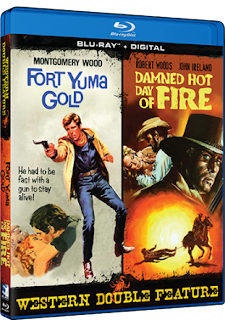 Two spaghetti western gems have been newly restored and are now available on Blu-ray thanks to Mill Creek Entertainment!

Mill Creek Entertainment has released a new "Western Double Feature," shining a spotlight on a couple of lesser-known spaghetti westerns that come from the heyday of the cycle. The first film on the disc is 1966's Fort Yuma Gold, perhaps better known by its original title, For a Few Extra Dollars, no doubt named to "cash" in the success of Sergio Leone's For a Few Dollars More, which had hit theaters the previous year. The title Fort Yuma Gold suits the movie far better and actually reflects the plot of the film, which is basically a heist operation set against the backdrop of the Civil War. Deep within a secure military installation lies a million dollars, and two different groups are racing to their destination in hopes of beating the other to the loot. Double-crosses and deception abounds, and Giorgio Ferroni (using the pseudonym Calvin J. Padget) directs this Euro-western with a lot of style and a pace that always keeps things moving.

Star Giuliano Gemma (billed here as Montgomery Wood) is no stranger to spaghetti westerns, having starred as the title character in Duccio Tessari's A Pistol for Ringo and The Return of Ringo, among others. Italian westerns that feature Gemma are among some of the finest in the entire cycle, and he brings both a likability as well as an acrobatic skill (witness a fight scene in which he does a forward flip off a flight of stairs) that other genre actors didn't possess. Dan Vadis, another of my favorite Italian cinema regulars, plays the heavy (literally) to great effect. Vadis was an American actor and bodybuilder who found great success working in Europe during the sixties, starting in Peplum films like The Ten Gladiators and The Triumph of Hercules before transitioning into spaghetti westerns. He would eventually go on to become one of Clint Eastwood's players, appearing in multiple productions for the former Man With No Name.

The film also features Angel del Pozo, who made appearances in Horror Express and The Three Musketeers, and French actress Sophie Daumier as a character named Connie Breastfull, a moniker that would surely make many of James Bond's leading ladies blush. Rounding out the cast are a ton of European character actors who were frequent performers in this type of film at the time.

Acting and plot aside, the biggest draws for Euro-westerns are the visuals and the music, and Fort Yuma Gold doesn't disappoint in either department. The cinematography is handled by Rafael Pacheco, who lensed quite a few European genre films. But the real heavy hitter here is the score which is provided in part by the legendary Ennio Morricone, the man behind the music of The Good, The Bad, and The Ugly. Interestingly, it seems that some of the music was lifted from a previous film (1964's Malamondo, a shock documentary) that Morricone scored, and he eventually sued the producers of this film. The composing duties on Fort Yuma Gold  are shared with the prolific composer Gianni Ferrio, and regardless of who wrote what, this is a textbook example of a great score.

Fort Yuma Gold is a fantastic spaghetti western and stars some of my favorite Euro-performers in lead roles. The story goes to unexpected places and is a cut above the standard "revenge" motif that often fuels the genre. The action is blazing; a bar fight occurs about half-way into the movie and it's one of the most impressive brawls I've ever seen committed to film. the climax of this movie is equally memorable and unique, with finely-staged action supported by real stakes and characters whose fate could go either way.

1968's Damned Hot Day of Fire (aka Gatling Gun and Machine Gun Killers) is a very different kind of film. While still operating within the confines of the spaghetti western genre, there's a big focus on espionage and investigation instead of blazing guns. It's paced very slowly and deliberately, and it doesn't hold the viewer's hand as the story unfolds in a way that isn't always obvious. This is not a criticism, but it's far less of a "pop" movie than many spaghetti westerns, and seems more interested in suspense and intrigue than gunfights and showdowns. Going against type, many scenes even take place in near total darkness.

The plot of the film centers around the Gatling gun, a precursor to the modern machine gun. The inventor of the real, historical weapon and his creation are taken by a group of kidnappers, who intend to use this important figure and his gun as leverage to fill their own pockets. John Ireland (Red River, Spartacus) plays Tarpas, one of the men behind the plot who is ruthless, but also controlled by his own insecurities. Robert Woods (Battle of the Bulge, Blackjack) stars as our protagonist, a military captain tasked with discovering the secret location of the weapon and its creator before time runs out and the war is tipped in favor of the opposition. It's not exactly James Bond (the Sartana films successfully combine the Bond aesthetic with the spaghetti western), but the undeniable influence of the Cold War can be felt here.

One of the strengths of Damned Hot Day of Fire is the cinematography. Simply put, the camera is always moving, zooming into faces, zooming out, circling scenes, and tracking characters fluidly as they move from one location to another. For a movie that puts a heavy emphasis on sneaking and investigation, the dynamic camera work goes a long way to make us feel that things are moving. This beautiful cinematography is the work of Francisco Marin, the man who shot The Return of Ringo for Tessari the year before. Another thing that sets the movie apart is a score that isn't driven my guitars and brass, but by an electric organ. It's a bold choice, and it helps to further distinguish this film from the many Euro-westerns that can occasionally blend together.

Damned Hot Day of Fire opens with a note which informs the viewer that the film is presented in its most complete and restored version. Some scenes that had previously been lost in English versions of the film could only be re-incorporated in their original Italian, as no dubbed versions exist. Therefore the reintegrated scenes (of which there are only a few) have Italian audio and English subtitles. I value the commitment by the restoration team to present this movie in its complete form.

The transfers presented on this Blu-ray are far from perfect, with the film sources displaying frequent pops and imperfections, but I feel comfortable saying that this high definition presentation is the finest these movies have ever looked on home video--and likely ever will. Spaghetti westerns (and many Italian films in general) are notorious for only existing in cropped, faded, chopped up versions that were exported to different parts of the world. Both films here are presented uncut, in high definition, in widescreen, and in their original aspect ratio, and both retain their cult cinema charm. Quentin Tarantino himself is on record as saying that he prefers film prints that show a bit of wear and tear because those pops and crackles and scratches remind us that we're watching a movie that someone shot on film. In that spirit, watching Mill Creek's Blu-ray feels like watching a double feature at a repertory theater. I think that's exactly how it should be.

It's also worth remembering that Mill Creek Entertainment is the distributor of these films, not the restoration team. I'm not sure who restored these films, but I suspect they were done in Europe and then licensed for distribution in various markets. While both films might not offer reference quality audio and video, I don't think these movies will ever look any better than they do here. For many of these low budget Italian movies made half-a-century ago, this is as good as it will ever get. The movies feature uncompressed 2.0 channel audio and no subtitles. There are no special features, but a digital copy is included via Mill Creek's proprietary streaming service.

As someone who has a deep affection for spaghetti westerns but has often only seen the many inferior versions of many of these films--often sourced from cropped, cut, and faded transfers intended for broadcast television decades ago--these new transfers are a breath of fresh air, and the films themselves are fine examples of the genre. I give this "Western Double Feature" my highest recommendation.