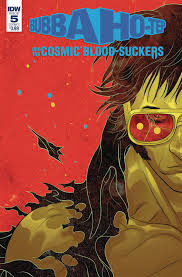 The final issue of Bubba Ho-Tep and the Cosmic Blood-Suckers leaves us wanting more.

Bubba Ho-Tep and the Cosmic Blood-Suckers has been one of my favorite comics. I've written about it, I made a video about it, and now find myself sad to be writing this review of the final comic in the series. Issue number five is the conclusion to Joe R. Lansdale's original novel, adapted for comics by Joshua Jabcuga, and I find myself a lot more affected by it than I expected to be. Cosmic Blood-Suckers hits me at the crossroads of so many of my own personal interests: Elvis Presley, sixties and seventies culture, rock and roll, and high-concept horror of Lovecraftian proportions. My melancholy is also being fueled by the fact that I am writing this on the birthday of Elvis Aaron Presley, and saying goodbye to this five-issue comic book series on this occasion feels both fitting and bittersweet.

Since this is a non-spoiler review, I'll keep the details vague. Issue number five does a nice job of wrapping up the story of the titular cosmic blood-suckers, but it also does a great job of bridging the gap between the time in which this tale takes place and when we see Bubba on the big screen in Don Coscarelli's Bubba Ho-Tep feature film. Each plot element is satisfyingly resolved, yet one can't help but feel that we have only seen the tip of the iceberg in terms of this universe and the stories that could be told. This is a good thing, because it indicates that our characters are rich and the world is compelling. I've written this before, but I'll say it again here: Lansdale's Bubba Ho-Tep premise lends itself to a comic book universe akin to Mike Mignola's Hellboy family of titles. I'm not only interested in the main character and his cabal of monster-mashing mercs, but in the history of the organizations that they serve. How deep do these threads go? How far back into American history (or even world history) can they be traced? I know there's an upcoming crossover called Army of Darkness/Bubba Ho-Tep in which Ash Williams meets Bubba, but I'm craving more period stories featuring this team of butt-kickers.

Interestingly, this final issue find the pencils being handled by a new artist. I'm a big fan of Tadd Galusha's line work, which felt like a perfect fit for this title. I'm not sure what facilitated this change in the art department, but I have to be honest that the pencils in issue five by Horacio Domingues don't seem to fit quite as well. They do tell the story adequately, and comic book art (and art in general) always comes down to personal preference, but it's a shame that the final chapter of the story contains such a departure in the visuals. Having said that, I don't know the circumstances behind this change or the schedule that Domingues was working within, so I must temper my criticism with reason. The art is does its job and it propels the story. I also need to give a huge shout out to Ryan Hill's colors, which always leap off the page and help anchor us in a particular time and place.

Luckily, nothing takes away from the most important aspect of this comic, which is the story. As has always been the case during this series, the voice of Elvis is strong and feels true to the man that many fans will know and recognize. The slinky southern slang, the casual ease that oozed from the man in real life is here in spades. So is the winking charm that reminds us that even when things are pretty far out and freaky, we're still having fun.

Aside from the upcoming Army of Darkness and Bubba Ho-Tep comics crossover between IDW and Dynamite, I honestly have no idea what the future holds for the character of Bubba, but I sincerely hope that I'll see these characters again soon. It would be such a shame if Elvis and his catsuit-and-afro-wearing friends rode off into the cold Kentucky rain once and for all.