Why the Music of Guardians of the Galaxy Matters 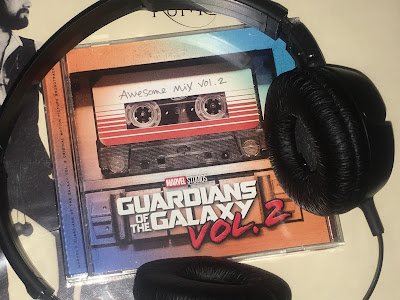 James Gunn's Guardians of the Galaxy Vol. 2 is such a big hit with both audiences and critics alike that even the songs from the movie are a big deal. What does this mean? A lot.

This is not a review of Guardians of the Galaxy Vol. 2. There are no spoilers for that movie, nor will this discuss any plot points. Instead, this is an analysis of the music of the movie and why it's such a big deal. Back in 2014, the first Guardians of the Galaxy was a smash success, propelled not just by the promise of a bunch of interesting characters, but by a trailer that was driven by music from the 1970s, creating an atmosphere that we hadn't really seen in a movie trailer before. The film itself offered more of the same and was filled with songs from the past, worked cleverly into the movie as Peter Quill's "Awesome Mix Vol. 1." The soundtrack of the same name sold in the high numbers as everyone was eager to listen to music from at least three decades ago. It was interesting, unforeseen, and made a big dent in popular culture.

With Guardians of the Galaxy Vol. 2 and the soundtrack album that accompanies it, director James Gunn has actually doubled down on the music in the movie with more songs, deeper cuts, and an unabashed love of multiple genres. He's got people digging the country side of Glen Campbell (as they should) and fired up about the UK glam band Sweet like it's still 1977. I've tried for years to turn people on to Fleetwood Mac and got nothing but stunned looks by anyone I tried to convince. With one fell swoop, James Gunn has made Fleetwood Mac perhaps even cooler now than they were forty years ago. James Gunn, Troma director, comic nerd, and music aficionado, has become the taste maker, and it's beautiful to behold. Joss Whedon didn't even get this much traction in the zeitgeist with his Avengers movies.

The music of Guardians of the Galaxy (both films) tells us a few things. It tells us that James Gunn has great taste in music and probably has a killer record collection. This isn't surprising; he's fronted a band and still makes musical contributions to his projects. For Gunn, it seems that music and movies are not exclusive passions, but are instead two sides of the same coin. His affection for each compliments the other, creating something that is stronger than if he chose to focus on just one of them.

It tells us that we as a culture are nostalgic, not only for a time and a place that we once experienced, but also those that we wish we had experienced. The soft rock stylings of Looking Glass and their hit "Brandy (You're a Fine Girl)" seem welcoming and warm in our current reality. We've just had the most divisive and bitter presidential election in history. The economy is down, and jobs aren't where they need to be. But in James Gunn's world, Cat Stevens is gonna make it alright. Music is the medicine, and it's a strong dose. Guardians of the Galaxy Vol. 2, even more than the first film, is dripping with mid-seventies atmosphere, from the title screen to the closing credits.And we love it, not in an ironic way that finds us rolling our eyes, but genuinely, because it's FUN and because it's GOOD. James Gunn is that cool uncle that turned you on to all sorts of heady stuff when you were thirteen. In his movies, A.M. gold boldly sits next to glam rock. Like Doctor Who and his fez, it's cool because he says it's cool and offers no apology.

It tells us that Disney is willing to take chances. This much licensed music must have cost The Mouse a ton of bank, but they don't seem to have batted an eye. As much criticism as Disney gets for cookie cutter movies and the assembly line method of film-making, they've taken some real risks lately that have their directors praising them. Big budget film-making must be hard, demoralizing work, and Disney deserves crap for re-imagining every cartoon hit they've ever had as a live-action movie. But James Gunn is on record as stating that Disney basically allowed him to make the movie he wanted to make. He says they didn't interfere, and gave him leeway to take chances. Guys, both Guardians of the Galaxy movies are subversive and filled with some pretty edgy stuff. Fortunately, they're also filled with heart, family, and genuine human emotion, which is why I have to imagine Disney allowed Gunn to go to some of the places he does in his films. This is a company that is bumping off Star Wars characters left and right. They just put out a movie at Christmas time where none of the heroes survive to the end credits. Disney has taken some pretty big chances with their tentpoles. Guardians of the Galaxy--and all that cool music that is found within it--is evidence of a company that is willing to take risks, and to spend a lot of money on something they believe in. They could have said no to all those cool songs. They didn't.

But most importantly, the music of Guardians of the Galaxy shows us that James Gunn's fingerprints are all over his movie. In an increasingly sterile blockbuster environment where every movie looks like every other movie, Guardians of the Galaxy Vol. 1 and 2 don't look or sound like anything else. They exist within the Marvel Cinematic Universe, but they're covered in human fingerprints. Hollywood blockbusters aren't really something that I'm all that interested in these days, but thankfully James Gunn's big budget movies still retain the same fun, cool, and subversive elements of his B-movie roots. It feels like the work of a singular man (as much as any 200 million dollar picture can), not a group of suits in a board room. For me, these fingerprints are visible with every kick of the bass drum during "The Chain" and during the confectionary cheer of ELO's "Mr. Blue Sky." They're there when the themes of the film become evident and the music drives the point home. We can agree or disagree on the film itself, but for me, the music serves as the connection to the man who made the movie. Even though it's a film populated by aliens, a talking raccoon, and a dancing tree, the music is my doorway to the adventures of Peter Quill--I mean STAR LORD--and the Guardians of the Galaxy.
Awesome Mix Brandy Disney ELO Fox on the Run Glen Campbell Guardians of the Galaxy Looking Glass Marvel MCU Mr. Blue Sky Soundtrack Sweet Troma