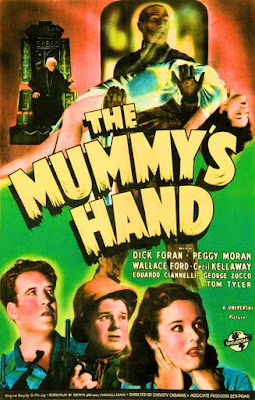 
The Mummy's Hand was the first sequel to the original Karloff film which introduced the Band-Aid man in 1932. Universal had let him sleep for a full eight years, forever in the movie business, before reviving the concept to see how much more blood they could wring out of it. Hollywood in 1940 was waaaaay different from the Hollywood of 1932. First, there were all the flying cars. Second, most of the actors and actresses from the thirties had smoked, drank, and partied themselves to death. Kidding, kidding...sort of. But really, things were different by 1940, and The Mummy that we get in The Mummy's Hand is not the same one we knew from the first movie. Literally! Imhotep, the original Mummy, isn't even in this movie. We get a new guy, Kharis. Okay, so his origin is almost identical to Imhotep: forbidden love with a princess, an act of atrocity, sentencing to be mummified alive. Yeah, the origin is pretty much exactly the same, and they even recycle some of the footage from 1932's film, just with a new guy, Tom Tyler (a B-western star), standing in for Boris Karloff. But he's different, I tell ya. 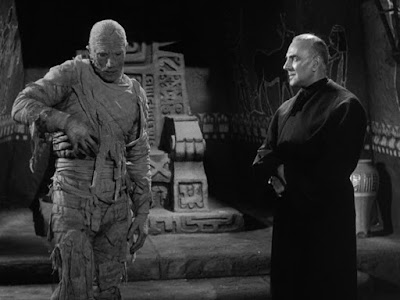 The Mummy himself is not all that has changed. Instead of a somber tone, this one has a lot of comedy. Instead of a single female lead for our Mummy to pursue, we get a quirky team made up of Dick Foran and Wallace Ford doing what amounts to an Abbot and Costello routine. Foran (The Petrified Forest, The Black Legion) is the straight man, an archaeologist who is treasure hunting in Cairo with his funny, abrasive partner, Ford (Harvey, Freaks). I say they are doing an Abbot and Costello routine, but I don't think A and C had established themselves enough to be mimicked yet, so it might just be coincidence. Anyway, we'd get to see how the famous comedy duo fare against The Mummy in a few years. Stay tuned.

The tonal shift really works, at least for me. By taking things less seriously and by amping up the actual horror, this becomes something entirely different from the first movie. First up, there's a more exciting atmosphere, with the archaeological/treasure-hunting aspect making this not only a horror film, but also an adventure. There's a reason George Lucas and Steven Spielberg drew on old adventure movies and serials of this period for their character Indiana Jones. Egypt, ruins, digging in the desert, and having hair-raising adventures were a hallmark of the genre movies of this time. It was just in the air, and had been since the '20s. A full half of the movie is set-up, with Dick Foran's character finding a broken vase that ends up leading him on an expedition to find "The Hill of the Seven Jackals." If he finds the location, he may also find the resting place of Princess Ananka, the doomed lover of Kharis. Funding the expedition is a stage magician named Mr. Solvani (Cecil Kellaway, The Postman Always Rings Twice, Guess Who's Coming to Dinner) and his feisty, trigger-happy daughter Marta, played by Peggy Moran (One Night in the Tropics, which also starred Abbot and Costello...HEY!). See, we're already way different from the previous movie. 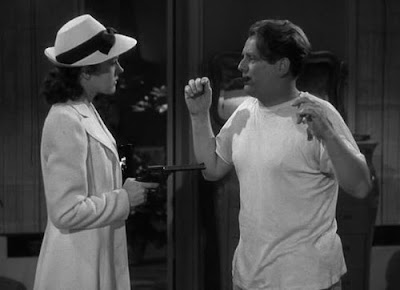 What the expedition team doesn't know is that there's a high priest living in the temple they seek, and he has Kharis under his power. Using a potion made from tana leaves, this high priest has discovered how to keep The Mummy alive and use him as a tool of destruction. Too many tana leaves in the potion (more than nine) would give Kharis the power of ultimate destruction, so by using only three at a time, Kharis is diminished enough to be controlled. For the high priest's henchman, he enlists Andoheb, played by George Zucco (1939's The Hunchback of Notre Dame). As the archaeological expedition comes closer to their destination, it's the evil of Andoheb and The Mummy versus the good guys of science, decency, and buddy comedy.

This movie establishes a lot of stuff. It retires Imhotep (I wonder if we'll ever see that guy again?) in favor of Kharis. It introduces the tana leaves potion and the concept of reviving The Mummy by pseudo-scientific means, but also of controlling him. It introduces the lumbering, slow Mummy that drags his foot and keeps one his arms tucked into his side. This is The Mummy that sneaks into people's homes and strangles them. Also, in a nice little touch, the filmmakers went into the actual film negative during post-production and blacked out The Mummy's eyes, giving him a scarier, hollow appearance. Awesome. 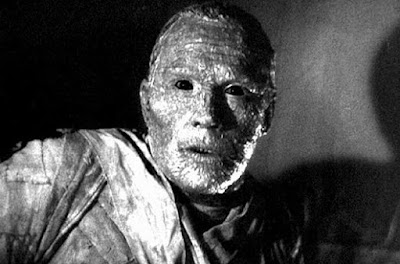 I appreciate the lighter tone to offset the darker horror. The humor doesn't always work, especially not now, so far removed from when this movie was first released, but it definitely reflects a movie that isn't taking itself too seriously. The formula for horror sequels had been set: make them laugh, make them scream, make them go home. At only a little over an hour, this movie barely has time to do anything other than offer some breezy laughs and creeps, which is another thing that kind of hinders these movies. They have their climax, which is usually really intense and involves someone important either dying or almost dying, then the monster gets set on fire or kicked into lava, then they cut to someone telling a joke, and then "THE END." It's like this: flames...screaming...death..."hey, your mother in law called, and she's coming to town for a visit! I bet you'd rather fight that mummy again!" CREDITS. You've been through every emotion in the span of 48 seconds. Let me down slowly, guys. Buy me a drink and tell me everything is going to be alright. Maybe this was all dictated by the production code, which is known to have forced happy endings on movies.

I dig this sequel. It's no great shakes, but it sure is fun. I don't think it was ever intended to be much more than that, anyway. It was made on a fraction of the budget of the first one, which--eight years after the original--probably didn't go very far. They re-use sets from other movies and serials, and cast lesser-known talent. In fact, this is clearly a budget production, making this a B-movie, and here at Cereal At Midnight, WE LOVE B-MOVIES. I'm digging this series. Onward to the next one!