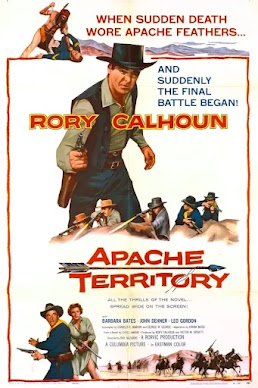 1958's Apache Territory exhibits everything that I love about the western genre at its mid-century pinnacle. Rory Calhoun plays a drifter who wanders into the titular Apache territory, a highly-dangerous land where outsiders are quickly attacked and killed by the warrior tribe that inhabits the area. Within minutes, Calhoun has spoiled an Apache raid on one group of travelers, yet arrived too late to stop another attack, which left behind a young female survivor. With certain death closing in on all sides, Calhoun finds a box canyon that has a small water supply and enough protection for a temporary refuge. It doesn't take long for a host of other desperate characters--including an old flame--to descend upon the same defensible post. With the gang in place, time is running out; if the Apaches don't get them, their dwindling resources and cabin fever will.

Quite a few themes are packed into this short feature. Calhoun simply wants to be left alone to wander, but his knowledge of the land and experience in the wilderness makes him the most equipped to survive, thus he wrestles with a leadership role that he doesn't desire. The screenplay seems to draw on the real ethical dilemmas brought on by World War II. There are no black hats or white hats here; Strong men turn into cowards while others crack under the stress of combat and run straight into danger. Violence is omnipresent. One character is captured and tortured by the Apache as our survivors are forced to listen to his screams in the night. The scene goes on long enough that it becomes uncomfortable to watch. 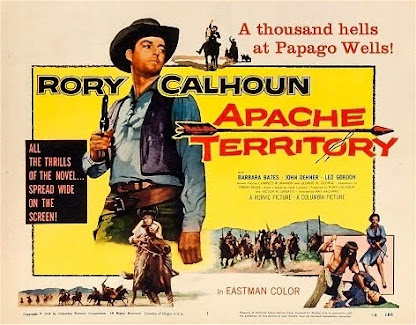 As with so many studio pictures, part of the charm for cinephiles is seeing character actors at work. Apache Territory features fine performances from John Dehner, Leo Gordon, and Barbara Bates in her final film role as an ex-lover of Calhoun who could never compete with the restlessness in his heart. Once again, the impact of WWII and the search for identity in its aftermath informs much of what we see here.

The picture comes from Rorvic Productions, a company founded by Rory Calhoun and Victor Orsatti. The partnership resulted in five projects, but this was the last feature film from Rorvic before Calhoun and Orsatti moved to television for the above-average Desilu series The Texan, which lasted for two seasons on CBS. Calhoun would eventually come back to features, but this 1958-1960 period is quite possibly my favorite chapter in Calhoun's career. The screenplay is adapted from the Louis L'Amour novel Last Stand At Papago Wells, which might explain the opening narration by Calhoun, something that I wish lasted throughout the entire film but doesn't. The film is directed by Ray Nazarro, a king of the Bs whom Budd Boetticher called a "ten day picture guy". Boetticher should know, since he himself was a master of short shoots, bringing movies in under budget and on schedule, if not early. Shot partly on location in Red Rock Canyon, California, the production value of the real west is outstanding, too. The movie looks like a bigger picture than it really is. At a streamlined 71 minutes, it showcases just how a good director can pack in an entire film's worth of action, plot, and character development into a lean running time. Consider pairing Apache Territory with Fort Massacre, another exceptional 1958 film with a similar plot about stranded survivors making one last stand.

Apache Territory is a Columbia film that now resides in the Sony vaults. There is a MOD DVD version that's readily available on Amazon, but western aficionados will want to seek out the region free Australian DVD from Umbrella Entertainment which is part of the distributor's extensive "Six Shooter Classics" line of films. There are no special features, but the transfer is solid and the original aspect ratio is preserved in anamorphic widescreen. Here's hoping a Blu-ray manifests at some point, but until then, we have a very clean, watchable copy. Like so many other westerns from the 1950s, Apache Territory is a wonderful example of how some of the richest stories came in the form of low budget B-movies.