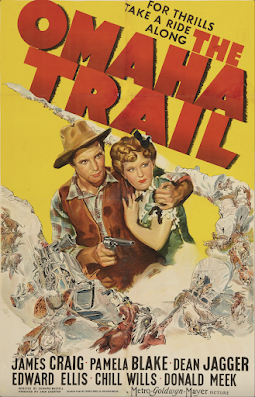 The most remarkable thing about 1942's The Omaha Trail is that it manages to pack in so many western movie tropes in its 62-minute running time: cross-country wagon trains, an Indian ambush, and even a climactic pistol duel in the streets.

This B-film comes from MGM and appears to have bigger production values than were within the reach of the Poverty Row outfits like Republic or Monogram, but a closer inspection reveals the judicious use of stock footage. The plot concerns the expansion of the railroad in the 1860s, which will likely put the more traditional ox-driven trails out to pasture. James Craig stands on the side of progress, but a sideburned Dean Jagger has made a lot of money from the old fashioned trails and isn't ready to let the business go; he will stop at nothing--including violence--to hold on to what he's got. Character actor buffs will enjoy seeing future MASH actor Harry Morgan in a minor role and Chill "Don't Call Me Francis" Wills is the comic relief.

The screenplay comes from Hugo Butler, who had been nominated for an Oscar for 1940's Edison, The Man and the direction is handled by Edward Buzzell, perhaps best known for his work with The Marx Brothers. This dusty trail oater feels a long way from familiar territory for him, but those comedy roots become more apparent near the end of the film where a saloon singer belts out a tune called "Bang, Bang, Bang." This catchy little ditty about a mustache-twirling outlaw who was so mean that he rose from the grave to keep killin' is worth the price of admission, and it was written for the movie by Edward Buzzell.

Like so many B-movies, The Omaha Trail doesn't reinvent the wheel, but it does have fun rolling it around for an hour. I watched the film via the "Cowboy Heroes Vol. 2" collection from VCI, which seems to have been sourced from a clean, unrestored print that bears less damage than one might expect.