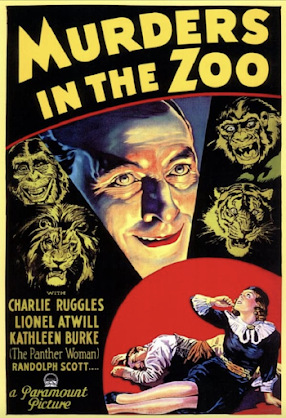 Within the first moments of the film, Murders in the Zoo lets us know what we're in for. We enter on a jungle scene as a group of adventurers hold down a struggling man while their leader--played with wonderful menace by Lionel Atwill--sews the captive's mouth shut. Atwill stars as Eric Gorman, a zoologist who captures animals in their native habitat and supplies them to zoos. His wife Evelyn (Kathleen Burke) is something of a flirt (though it's implied she does more than flirt), and we soon learn that Atwill is so jealous that he's willing to resort to extreme measures like sewing up the mouth of a man that he sees as a threat. But when he catches his wife with yet another man (John Lodge), will he kill to keep them apart? Answer: you betcha. 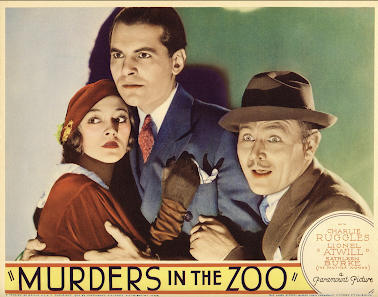 Much of the story unfolds in and around a zoo, which serves as a nice backdrop for the animalistic actions of violence. Future western-genre stalwart Randolph Scott has a notable role here as the dashing Dr. Jack Woodford, and he shows a ruggedness that the studio was keen to capitalize upon in this film and others from the same era, such as 1932's Hot Saturday. He handles several snakes on camera, and even de-venoms one by pressing its fangs against a glass container. Impressive stuff, but maybe not surprising for a man who would very soon come to symbolize masculinity in cowboy boots, rather than a pinstripe suit. In another movie, Scott might be the action hero, but here he's part of an ensemble which also includes Charlie Ruggles (famously the narrator/Aesop of the "Aesop and Son" segments of The Rocky and Bullwinkle Show) as press man Peter Yates, "publicity department for the animals" and a constant drunk. 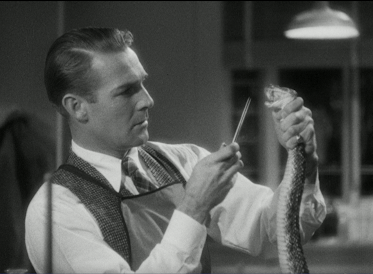 Murders in the Zoo is a Paramount film, so it doesn't have the traditional tone or setting of a Universal horror feature, even though Universal has controlled the film since 1958 when they purchased over 700 classic Paramount films for television. It's interesting to see how different studios handled horror fare during this era, with Universal deep in monster land, Warner going for gruesome chills with Mystery of the Wax Museum, MGM shocking audiences with Tod Browning's Freaks, and RKO bringing the Eight Wonder of The World to screens with King Kong. Paramount films definitely have a distinct tone and there's a fair bit of comedic relief here in the form of Charlie Ruggles' tipsy shenanigans, but the film frequently goes to some very tense and graphic places. Characters that we think will avoid their fate and survive until the end of the movie actually snuff it half-way through, and the methods of dispatch are sensational. Death by alligator may be my favorite. Mid-way through this 62-minute feature, things really get nasty when Atwill goes full villain and the real hunting begins. The tagline from the original 1933 marketing says it all: "HE KILLED FOR LOVE...AND LOVED TO KILL! 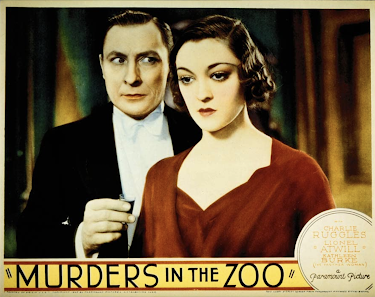 The zoo setting and the presence of real animals like lions, snakes, and monkeys provides a nice change of pace from the standard gothic atmosphere that's synonymous with many of the horror films from this era. There's a real sense of tension, especially when we realize just how crazed Lionel Atwill really is in this film, and a scene near the end when a group of large predator cats are set free inside a room and start to attack each other feels uncomfortably real. (Sidebar: it was real. 17 cats engaged in a brawl that resulted in the death of a puma. While the tussle was most likely not planned or foreseen by the filmmakers, it's an unfortunate glimpse of real-life ugliness captured on film for entertainment.) For me, the comedy ultimately holds the film back from being all-out horror (as was most likely Paramount's intention), but this Pre-Code shocker has garnered a reputation because of how far it goes with several of the death scenes, which remain quite effective 90 years later. Leonard Maltin is on record as calling the film "astonishingly grizzly" and he's right. It was banned in Germany, Sweden, and Latvia, with multiple U.S. censors asking for cuts to the film. Murders in the Zoo is included in Scream Factory's Universal Horror Collection: Volume 2 and remains a solid film, even though it's lost a bit of its shock value over the decades.