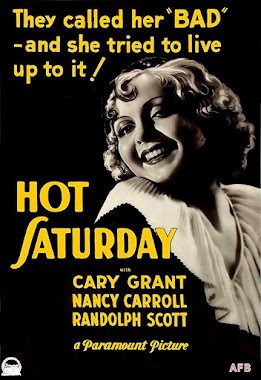 Ah, small town gossip! This pre-code Paramount programmer features a very early appearance by Cary Grant (who had just made his debut earlier in 1932 in This is The Night) as a wealthy socialite and Randolph Scott as a down-to-earth (literally) geologist. Both men are the possible love interests of Nancy Carroll, a bank employee who is virtuous, but likes to spend the weekends partying with her pals. One hot Saturday night, things go a bit too far and before she knows what's happened, our sweet banker is the subject of gossip running through town like wildfire.
Because this is a pre-code film, subjects such as infidelity, spending the night at a wealthy man's house and even possible cuckolding are pushed to the forefront to bring as much salaciousness as possible. Also of note, a scene in which Nancy Carroll passes out in the rain and awakes to find herself dry in bed with all her clothes removed and hung out to dry by Randolph Scott's character, who leans over her in an intimate scene that would very soon be a definite no-no once the Hays Code began to be enforced.
Nancy Carroll is likeable and sympathetic and fresh-faced Cary Grant is incredibly charismatic, exhibiting leading man quality even this early in his career, still a couple of years shy of his 30th birthday. Randolph Scott doesn't have a lot to do here, but it's always nice to see him in a pinstripe suit instead of cowboy boots.
We screened Hot Saturday via the brand new 2021 Kino Lorber Studio Classics Blu-ray, which appears to come from a new scan and looks great, and includes a commentary by Lee Gambin.
Hot Saturday is a nice little melodrama that is perhaps most notable for its cast and not for its plot, but it does remind us that gossip, backstabbing, and bullying is nothing new. Once again, pre-code cinema exhibits how little we've changed in the last 100 years.
1932 Cary Grant Hot Saturday Kino Lorber Nancy Carroll Paramount pre code Randolph Scott Studio Classics William Seiter