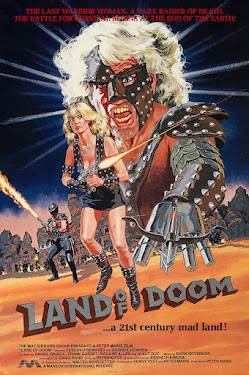 Contrary to Tina Turner's proclamation that "We Don't Need Another Hero," the success of the Mad Max franchise in the 1980s spurred an entire exploitation cycle of post-apocalyptic movies that saw any enterprising filmmaker with a few bucks and a willing cast and crew trekking into the wasteland to cash in on the trend while the gettin' was good.

In many ways, it was a more innocent time when audiences demanded less from their entertainment. They would suspend their disbelief for 90 minutes to watch a hero or two struggle against some gasoline despot or rajah of the ruins who terrorizes a tattered band of survivors with an iron fist, or mask...or something made of iron (scrap metal is very important in post-apocalyptic movies, after all). There are almost always motorcycles that look like they've been kit-bashed from the remnants of an automobile graveyard because motorcycles look really cool zipping around sand dunes. 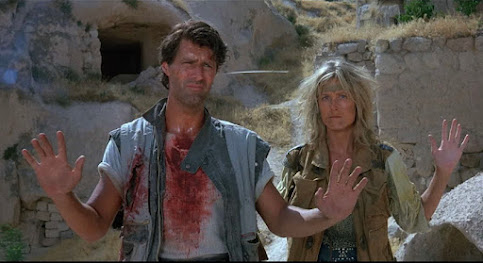 One of the many movies to come out of this film movement is Land of Doom, a modest little tale that manages to do a few interesting things. First among them, it stars a female lead. Now, a female lead in a post-apocalyptic movie isn't unheard of. 1984's She stars Sandahl Bergman of Conan the Barbarian fame, but Bergman bears the traditional "rag bikini" attire in that film, existing as both a bold warrior and an object of sexual desire. It's hard to find a post-apocalyptic film (or a barbarian film, for that matter--there's a lot of overlap) that doesn't sexualize the women and make them objects of lust for both the characters in the story and the audience.

But Land of Doom doesn't do that. No rag bikinis here, friends, nor do we see any rag loincloths for the men. The inhabitants of this film have actual honest-to-goodness pants, which really seems a lot more practical than little scraps of cloth that barely cover their unmentionables. It is an unmerciful landscape, after all. Deborah Rennard, a veteran of the television series Dallas and the future femme fatale of the Van Damme vehicle Lionheart (one of my favorites) takes the center stage as Harmony. She's tough as nails, though as the actress herself is on the record as stating, it doesn't make a lot of sense that she's able to pulverize 300-pound stunt men and bodybuilders. Hey, we're not here for reality, we're here for a good time. Along the way she finds an injured man (Garrick Dowhen, another TV actor with few credits) who joins her as they face off against a cookie-cutter villain. 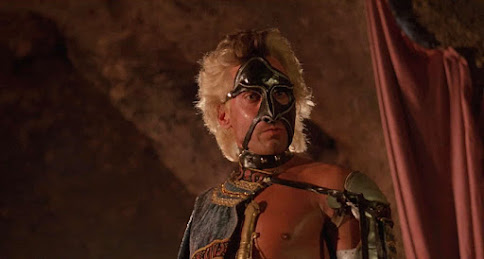 The movie takes place after "the final war," and for less than 90 minutes, the characters run around the Turkish landscapes of Cappadocia, the exact same shooting location as seen in other, similar films, including another favorite of mine, Yor, The Hunter from the Future. There's not a lot of plot (maybe even less than in similar exploitation movies), but Rennard, in her feature film debut, has a mix of strength and innocence that carries much of the film. Through the dirt and grime, she's got a really fresh face that feels at odds with our expectations. The environment itself also goes a long way toward giving this one a slightly above-average visual presentation. The movie even decides to throw Jawas at us once we get past the half-way point. No joke, they're a direct copy of the Jawas from Star Wars, complete with the little voices speaking words we don't understand. All we're missing is "utinni." Adding to the charm is a solid mid-eighties score comprised of melodic synth and post-disco beats that wouldn't feel out of place in an A-Team episode. 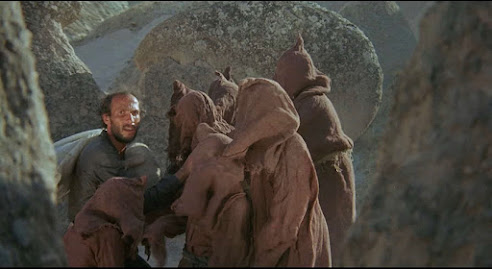 The movie is directed by Peter Maris, based on a screenplay (his only film work) by Craig Rand, who is adapting a novel by Peter Kotis that I must read. Maris is cult filmmaker that genre fans will know from his 1979 debut Delirium as well as his follow up to this feature, 1987's Terror Squad, starring Chuck Conners and written by comic-scribe-turned-screenwriter Mark Verheiden. That movie has just arrived on Blu-ray as well, but that's a tale for another time. Land of Doom has been rescued from the obscuring sands of time by Scorpion Releasing. A previous limited edition pressing from 2019 has gone out of print, but have no fear, it's now back in production and being distributed by the hard traveling heroes of MVD Entertainment, who are getting this one out to the masses via all the usual retail suspects such as Amazon and big box retailers. It's also available from Ronin Flix. The disc features a new 12-minute interview with the still-lovely Ms. Rennard, who looks back upon her silver screen debut with humor and curiosity. She didn't dislike the experience and is curious what fans will think of it now. 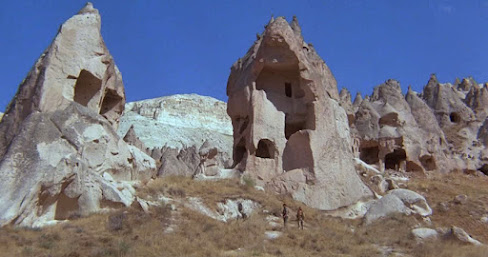 Land of Doom doesn't do anything necessarily groundbreaking--plot-wise, it doesn't do much at all, come to think of it--but it's hard not to like. I'm of the vintage that grew up with cheap-but-fun flicks such as this one that had no goal other than to entertain for an hour and change on a Saturday night. These movies were the fuel for our backyard adventures and are the equivalent of a comic book diversion--a candy bar, not a four course meal. Taken for what it is, the post-apocalyptic shelf is a little bit richer because of its existence.