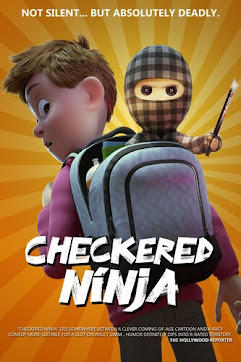 I'm not quite sure what to make of Checkered Ninja. Hailing from Denmark, this film looks like a heartwarming kiddie movie about a stuffed ninja doll but is actually something far edgier. It's also the second Northern European film to befuddle me in as many months (the other was The Old Man: The Movie) by combining a family-friendly tone with an adult humor that seems out of place.

The film is based on a novel by Anders Mattheson, who also co-directs the movie. Our tale begins in a Thailand sweat shop (as all the best kid's stories do) where children work their fingers to the bone making stuffed ninja plushies. When a young boy accidentally uses the checkered scarf of a visiting businessman instead of the regulation black cloth on one of the dolls, he's beaten to death. At that moment, a freak lightning bolt strikes the checkered ninja doll, giving him life and a mission of vengeance. Ladies and gentlemen, we have departed Pixar Land, driven miles outside of Dreamworks Territory, and now find ourselves in a wilderness of weird in which a movie that looks like children's entertainment is really about murder and revenge while being packed with profanity and crude humor--one character sings a sea shanty that I'm pretty sure is about his private parts. There is also a drug deal, cocaine smuggling, and a trip to a mental asylum.

But yet, somehow the movie is also sincere, telling a coming of age story about the boy who finds the checkered ninja. See, he's kind of an outcast, awkward in his own skin, no luck with the girls, trying to find himself. Our murderous ninja doll has to extract retribution, but first he's gonna teach our adolescent protagonist a lot about life and a little about love. There's warmth alongside the murder, vengeance, and cocaine smuggling. Eat your heart out, Winnie the Pooh. No, seriously, the Checkered Ninja will cut your heart out and eat it.

I can only guess that in other parts of the world, family fare is not as sanitized as it is in Hollywood. I want to be clear here, this movie does not seem to be made for adults. It's not South Park, full of biting humor and satire. On the contrary, it feels pretty sincere and geared toward 12 year-olds, which makes the darker elements so strange. Also, for me, it just isn't funny. Humor is subjective, so everyone's mileage will vary, but the jokes didn't land for me. Others with similar western sensibilities now have the opportunity to discover this movie for themselves thanks to a USA DVD release (there is no Blu-ray). The North American disc only includes an English dub, not the original Danish audio. There are no special features on the disc either, but the animation holds up pretty well in this standard definition presentation.

I find Checkered Ninja to be too tame for an adult audience and too edgy for a child audience, unless that audience happens to be Danish or Northern European. That's ultimately who this was made for, and it has really connected in its native land, selling over a million tickets and becoming the highest-grossing Danish film in over 30 years while also garnering awards that include Best Children's Film (?!). A sequel is currently in development. Hey, a million Danes can't be wrong...can they?