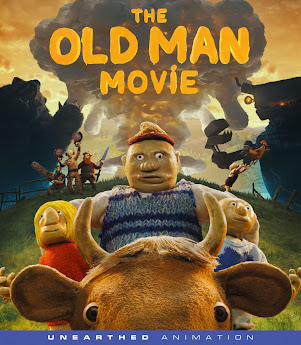 The Old Man: The Movie (original title: Vanamehe Film), is a weird flick. I mean REALLY weird. Take the charming, family-friendly stop motion animation of Aardman's Wallace and Gromit films and turn that on its head, throw in adult humor, F-words, truly bizarre set pieces and interactions, and then filter that through Euro-culture and you end up with what we have here.
The Old Man is a web series from Estonia (north of Latvia, south of Finland) that follows the exploits of a grumpy old farmer who lives in the country and is occasionally visited by his grandchildren. The web shorts that inspired the film are dark, strange, and a little sardonic. Exhibit A: in one short, The Old Man goes to his barn one freezing cold night to discover that his cow is in the middle of birthing a calf, but the calf seems stuck. He pulls it out and looks at the warm birthing cavity, then climbs inside for warmth, then falls asleep. The next day, he awakes to find himself freezing. When he climbs back out, he discovers the mother died in childbirth so he deadpans a look to the camera that lasts about ten seconds. Waka Waka!
The movie is just like that. It's rough around the edges and fairly cynical, but I also can't help but feel like I'm missing most of the jokes because they're so culturally foreign to me. The plot is absurd, but I mean that as a compliment. Years ago, the local milk farmer was renowned for his fabulous milking skills. But when he missed a day of milking, his prized cow EXPLODED from being too full of milk. The village was devastated and the milker became a bitter recluse. Now, years later, The Old Man is the village's new beloved cow milker, but when his cow runs away, he has to find it before it explodes and history repeats itself. With his grandkids in tow and an old villain from the past (hint: it's the original milker) determined to find it first, the race is on. Along the way, there are crazed bears, a music festival that ends in chainsaw violence, and the strangest tree-sex scene I've ever seen. Yes, I've seen more than one!
Now North American audiences can decide what they think about the movie for themselves. Unearthed Films has brought this acid oddity to DVD and Blu-ray with a pristine transfer and a collection of the shorts (though not complete) that inspired the film. Estonian language tracks are present in 5.1 surround and 2.0 stereo and a new English dub is also included in 5.1 and 2.0 as well.
I'm still not sure how I feel about The Old Man: The Movie. I didn't laugh or even smile a single time while watching the film or the shorts that are included on the new Blu-ray. I find it to be a bit long and meandering, and yet I appreciate its absurdist perspective and dark sensibilities, which we simply don't see enough of in modern animation. I realize there's a cultural barrier for me here too, but it should be noted that this movie was a three-time winner at the 2020 Estonain Film and TV Awards. The film is beautifully animated and filmed, with who knows how many man hours of labor involved in making these little lumps of clay look and feel like living, breathing (and thoroughly insane) characters. Make no mistake, this is not for children, but what was the last high profile stop-motion animation film that was made for adults? For these reasons, The Old Man:The Movie movie should be championed. Just be prepared to never look at a cow the same way again.
Estonia The Old Man Unearthed Films