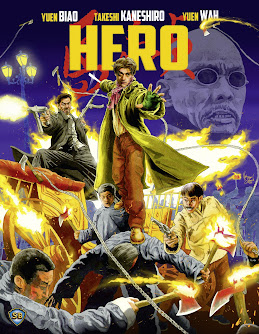 Power corrupts. This simple fact has been the theme of countless movies that showcase how the rise to power is so often followed by a fall from grace. Money, power, and corruption are the subjects of 1997's Hero, which is not to be confused with the 2002 Jet Li movie of the same name. The film takes place in 1897 Shanghai and chronicles the rise of Ma Wing Jing (played by Taiwanese/Japanese actor Takeshi Kaneshiro, an actor that video game fans may recognize as the star of Onimusha), a determined-but-poor working-class tough guy who impresses local mob boss Tam Sei (Biao Yuen) when he refuses to back down from a fight. The standard organized crime story follows as our protagonist grows in power and influence while becoming a target for rival, hatchet-wielding gang members as he ascends the ladder to the top.

Sound familiar? Hero is a remake of Chang Cheh's 1972 epic The Boxer from Shangtung, but with an entirely different aesthetic that fundamentally changes almost everything about the movie except for the basic premise. Cheh's film comes from the heyday of kung fu cinema and is a landmark Shaw Brothers production that marries an ambitious plot with the kind of extended fight scenes that influenced literally everything we know about martial arts movies in the modern era. Hero takes a different approach: it has seen The Godfather, Scarface, and Goodfellas, but it has also seen the incredible John Woo films like The Killer and Hard Boiled. The end result is a movie that is deliriously schizophrenic, mixing silly humor (what is this new invention called a bra?) with some of the goriest battles I've ever seen in a Hong Kong production...and that's really saying something, because Shaw Brothers movies are often drenched in blood. Reportedly, the movie was so brutal that it almost received Hong Kong's "Level III" ratings classification, meaning no one under 18 could see it. And yet, for all the decapitations and dismemberments, it also features a scene in which someone gets a pie thrown in their face. 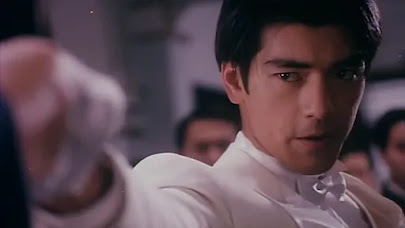 The strangest thing about Hero is that it's shot like a TV movie. It's often brightly lit with no flair, atmosphere, or depth of field. The opening and closing credits feel flat and add to the "movie of the week" vibe. Plot scenes rush along, one after the other with no mood or weight to them. It's worth noting that the film was produced by Mona Fong, the chair-person of Hong Kong's Television Broadcasts Limited, though this was indeed a theatrical release. Worst of all, this Shaw Brothers film is not shot in the widescreen Shawscope ratio of 2.35:1, but in the more television-friendly 1.85:1 aspect ratio. Maybe this odd presentation was due to budgetary constraints, since the writer and director, Corey Yuen (who also acts in the film), has proven that he can turn in a visually-interesting product both in his native Hong Kong and in America, as he did with the 2002 Jason Statham vehicle The Transporter. 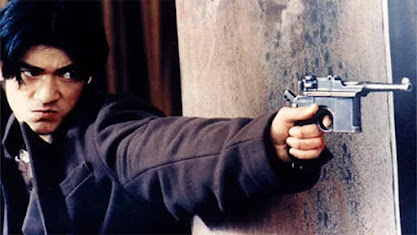 Thankfully, the action scenes in Hero balance out these cinematic shortcomings, and are probably the reason most viewers are watching anyway. When it focuses on action, the movie really soars, with hand-to-hand combat, gunplay, and the kind of tough-guy posturing and swagger that feels influenced by the New Hollywood that was ushered in by Reservoir Dogs. Another note on that gunplay: traditional squibs and blank cartridges were not allowed at the time of this movie, so most of the muzzle fire that we see on screen is achieved through the use of firecrackers that are added optically. It's odd, but unique. 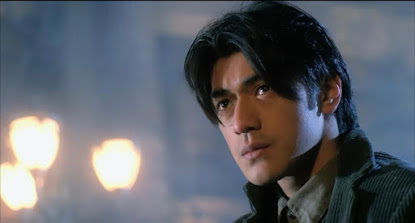 Hero arrives on Blu-ray from 88 Films in a Region A/B release that touts a 1080p transfer sourced from the original 35mm camera negatives. It looks as good as it ever will, though it never does escape the visual deficiencies already mentioned. The Limited Edition pressing of the film (the first 3000 units) include a slipcover with new artwork by "Kung Fu Bob" O'Brien, a double sided poster, and an informative booklet that contains the essay "Do We Need Another Hero?" by Andrew Graves, who is appropriately critical of the film's shortcomings when compared to the original 1972 film The Boxer from Shangtung. An audio commentary from industry pros and Asian cinema experts Mike Leeder and Arne Venema find them approaching the film with appreciation, but also an awareness of the things that don't quite work. Trailers, alternate Taiwanese footage, and English and Cantonese audio with newly-translated English subtitles are also included, as is a reversible art wrap with both the original and new artwork.

Technically, Hero is a Shaw Brothers production, but it feels like something else. As Andrew Graves notes in his essay, The Shaw Brothers studio was just a shadow of what it had been throughout the 1970s and 1980s, with only one or two releases a year throughout most of the 1990s. They wouldn't release another film after Hero until six years later. In my review of The Boxer from Shangtung, I noted that I found the 134-minute uncut film to be a bit bloated, but I appreciated the action scenes, particularly the hatchet-heavy finale. Now, as I write a review for this 92-minute 1997 remake, I find my comments to be something of a mirror: Hero is a bit anemic in plot, but the action scenes prop it up and carry it across the finish line. Ultimately, it  comes across like the work of someone who was told that they could only make one movie, with an end-product that feels like it's composed of lots of pieces from other, different movies. It never quite comes together, but it sure does have some great action scenes that make this one well worth seeking out. Just because a movie isn't a great success doesn't mean that it isn't worth seeing or owning. Fans of Asian cinema and martial arts movies know all too well that so many of these films have been incredibly difficult for western audiences to see until now, thanks to the efforts of vigilant distributors like 88 Films and Arrow Video. While it doesn't rise to the heights of seventies Shawscope spectacles, Hero is an easy recommendation for kung fu fans.