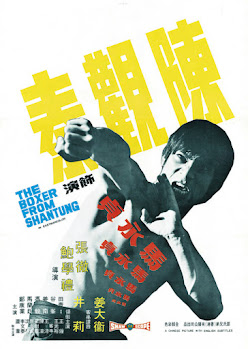 Chang Cheh's The Boxer from Shangtung is a rags-to-riches story of hubris and the consequences of ambition. A small town guy (Chen Kuan-tai) impresses a local mob boss (David Chiang) when he fights off some street thugs. Later, he further courts the underworld when he defeats a massive European wrestler in a one-on-one tournament brawl, cementing his status as a tough guy with criminal connections. Before he knows it, our not-so-humble anti-hero is headed to Shanghai and people are calling him boss; worse still, he likes it. But pride comes before the brawl, and the meteoric rise to the top just makes the inevitable drop all the more devastating. Soon, Chen's rivals are targeting him with a trap that he won't likely escape.

In my own personal kung fu journey, I've come to realize that I have certain expectations for Chang Cheh movies. First, I expect an absurd amount of bloodshed. Cheh's films tend to be literal bloodbaths in which gallons of the red stuff are splashed all over everyone and everything on the screen. I have to imagine audiences who sat close to the front row at theatrical showings considered wearing raincoats so as not to have the flowing streams of gore come through the screen and ruin their clothes. Being on the overnight clean up crew at Shaw Studios must have been one of the worst jobs in the biz. Bathroom janitor? Better than mopping up the set. Second, I know that Cheh's heroes and anti-heroes will suffer tremendously. The level of anguish that Cheh puts his main characters through is near-biblical, and The Boxer from Shangtung is certainly no exception to this rule as Chen Kuan-tai's character spends the entire third act of the movie with a hatchet stuck in his stomach. Third, I know the fight scenes are going to be exceptionally choreographed and filmed, and will stick in my memory long after the movie has ended.

The Boxer from Shangtung is a highly-ambitious movie that tries to rise above the expected martial arts spectacle. Comparisons to Goodfellas and The Godfather are not unwarranted. For me, the film is a bit too ambitious, as the running time swells to 134 minutes, which is awfully long for a kung fu flick. For comparison, that's thirty minutes longer than each of Bruce Lee's early star-making movies, and far above the traditional martial arts movie running time of less than two hours. Chang Cheh and his prolific co-writer, Ni Kuang (who wrote over 400 screenplays) are going for something special here, a fable that feels influenced by Hollywood dramas as much as action cinema. For me, it's just too much, and I found myself making cuts in my head and questioning the pacing. For example, a catastrophic event kicks off the climax of the film and launches the final act, but there's still 40 minutes left to go. Not a coincidence then, that the U.S. cut which hit theaters in 1980 trimmed a full 30 minutes from the film. I'm torn; on one hand, the story does work as presented and I'm happy that I've seen the original, uncut presentation. On the other hand, forget cleanliness; brevity is next to godliness. The Boxer from Shangtung is exhausting, but others might substitute the word "epic."

As expected, the fight scenes are just incredible. They escalate as the movie progresses, and the climactic final fight is one of the most impressive, brutal, and unbelievable on-screen battles I've ever seen as Chen Kuan-tai takes on an entire army of hatchet-wielding thugs and literally brings down the house. The entire movie took 30 days to shoot--just a fraction of the usual 60-90 day shooting length for most Shaw Brothers movies--but a full 10 of those days were devoted to filming the final fight. Really, the climactic battle is such an impressive spectacle, it surpasses everything else in the movie and becomes the centerpiece of the whole story. It also serves as a brutal coda that hits the lessons of this parable home with a sledgehammer. Ambition, ego, pride? "Forget it, Chen, it's Shanghai."

The Boxer from Shangtung is included in Arrow Video's massive and essential Shawscope Volume 1 box set alongside 11 other Shaw kung fu movies and comes from a brand new 2K scan that looks gorgeous. The original mono Mandarin and English mixes are included alongside newly translated subtitles. Extras include a 22-minute interview with star Chen Kuan-tai from 2007, a 31-minute interview with co-star David Chiang from 2003, and an 8-minute interview with John Woo (yes THAT John Woo, who shot second-unit footage on this film) from 2004. Another interview with Chen Kuan-tai and co-star Ku Feng from 2007 runs almost 14 minutes. The partial Hong Kong credits (the original film elements have deteriorated) are included as an extra as well as the alternate English opening credits. The Hong Kong and German trailers are here, as well as a U.S. television spot and a digital reissue trailer, and an image gallery.