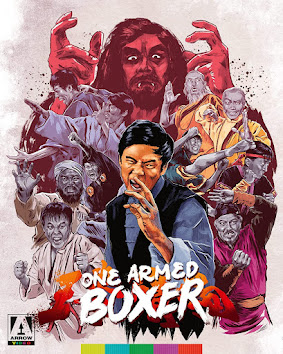 Roughly two years after breaking new ground for the Shaw Brothers with 1970's The Chinese Boxer, Jimmy Wang Yu continued to innovate the fledgeling kung fu movie genre with one hand tied behind is back, but this time it was for Shaw's biggest competition!

During the 1960s, Jimmy Wang Yu was a star on the rise. He'd been discovered by the iconic filmmaker Chang Cheh, who helped the former swimmer and athlete carve out a niche as a film star and a box office draw in a variety of roles, including The One-Armed Swordsman and its sequel. This culminated in 1970 with the arrival of The Chinese Boxer, which Wang Yu wrote, starred in, and directed at Shaw. The Chinese Boxer was a massive success and heralded the arrival of a superstar, but the Shaw Brothers saw things another way. When he couldn't even get a pay raise, Wang Yu sued the studio and left for Golden Harvest, a rival company that had just been launched by Raymond Chow, one of Shaw's former executives.

It's hard to believe now, but in 1970, not many martial arts films featured hand to hand combat. The Shaw Brothers had made a name for themselves with musicals, dramas, and action films featuring swordplay. The idea of hand-to-hand combat without weapons was still fresh and unexplored, and The Chinese Boxer was one of the first films to feature the way of the fist. As the writer, director, and star of Golden Harvest's One-Armed Boxer, Wang Yu capitalizes on the "one-armed" action he helped popularize at Shaw and continues to expand the open-handed fighting genre that had only recently been born.

One-Armed Boxer is CRAZY. Setting aside some of the grander, more dramatic film conventions of contemporary Asian cinema, this is basically one fight scene after another with occasional dialog exchanges to break up the action. The plot, if you can call it that, consists of the standard cookie cutter "bad guys from a rival school" who keep making trouble for our hero and his honorable companions. About half-way through the movie, Jimmy Wang Yu has his arm literally karate chopped off of his body by a fanged villain in black, hence the title of the movie. He must overcome this injury by numbing the pain and training to be the best fighter in the land as he seeks revenge.

The villains that he faces might as well come straight out of a cartoon. Two warriors do a dance to summon their strength before battle. Another walks on his hands and teleports to confuse his opponent. Yet another has the ability to literally inflate his body like a pillow, cushioning himself from harm. It's hard not to think of these characters as boss battles in a video game, because that's exactly what they feel like. The influence of this movie on the culture at large is evident, and revisiting it feels nostalgic and comforting.

Now One-Armed Boxer arrives on Blu-ray from Arrow Video with a 2K master supplied by Fortune Star. The picture quality is great, with a nice layer of fine grain and bright, bold colors. Three mono audio options are presented: original Mandarin, alternate Mandarin, and English. Because Asian cinema of the seventies played fast and loose with copyright law, it's only a slight surprise that the original Mandarin track features Isaac Hayes' theme from Shaft as the film's opening credits music and again several times throughout the movie, alongside a few other recognizable music cues, like those lifted from James Bond movies. The English track presents the original organ-heavy score by composer Wang Fu Ling, which sounds as if it's been inspired by spaghetti westerns.

Supplements include a commentary by the delightfully-entertaining Frank Djeng, a 41-minute career retrospective of Jimmy Wang Yu from 2001 courtesy of the Frédéric Ambroisine Video Archive, alternate opening titles, a trailer gallery for the film that also includes the U.S. television spot using the film's alternate title The Chinese Professionals, over 30 minutes of additional trailers from other Wang Yu movies, an image gallery, a reversible art wrap, and a 28-page booklet that includes the following essays: Jimmy Wang Yu and the Birth of the Kung Fu Movie by David West and the hilariously-titled A Farewell to Arms by Simon Abrams. Both essays are highly informative, not just regarding this movie, but also in helping us contextualize the under-appreciated importance of Jimmy Wang Yu and his contributions to the genre that he helped create. 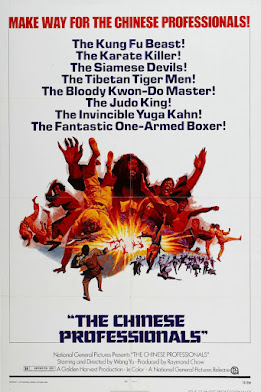 Some kung fu movies drag on and wear out their welcome, nearing or surpassing the two-hour mark. One-Armed Boxer is a brief 93 minutes, and it's almost all action. In fact, the first fight starts just a few minutes after the movie begins and we barely get a chance to catch our breath until it's all over. While Wang Yu was neither the most charismatic actor or gifted performer, his contributions nevertheless paved the way for future icons like Bruce Lee, Sonny Chiba, and Jackie Chan, not to mention the hordes of young fighters who would take the genre from Hong Kong to 42nd Street and everywhere in between as the seventies unfolded. One-Armed Boxer, like The Chinese Boxer before it and its sequel, Master of the Flying Guillotine, is an important chapter in the martial arts movie history that is still being written today.