Review: The Chinese Boxer aka The Hammer of God (1970) 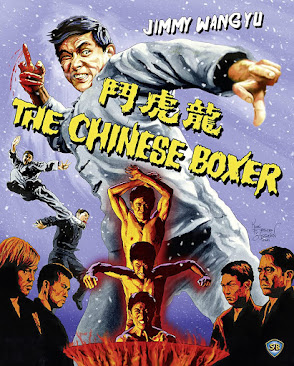 Martial arts superstar Jimmy Wang Yu makes a splash in 1970's The Chinese Boxer for The Shaw Brothers! This spectacle of flying fists is a showcase for Wang Yu, who wrote the film, stars in it, and helmed it in his directorial debut. Wang Yu had been known for a series of sword-based action movies throughout the latter half of the 1960s, but this is the beginning of the hand-to-hand combat kung fu movie as we know it, predating even Bruce Lee, who would add elaborate kicking techniques to his big screen battle repertoire.

The plot isn't all that different from many other Shaw Brothers action spectacles: a Chinese martial arts school is invaded by a loud-mouthed bad guy. He's beaten by Master Li and his students, but vows to return in one month for revenge. And return he does, with three Japanese karate masters who lay waste to the school, kill Master Li, and leave most of the students either dead or severely injured. One survivor (Lei Ming, played by Jimmy Wang Yu) must train to become the ultimate weapon, avenge his fallen master, and restore balance to his village.

The fight scenes are incredible, and let's be honest, the plots of these films are mostly just an excuse for carnage of epic proportions. After the lengthy set-up, the last half of the movie is a roller coaster ride of violence, as Jimmy Wang Yu uses his hands as deadly weapons. Gallons of Technicolor-red blood spew across the screen as our hero extracts justice on those who have wronged him. He faces off against countless thugs, and even a few sword-bearing Japanese samurai, leaving bodies and severed appendages in his wake. The set pieces are extravagant and incredibly-well shot, putting the focus on the fighters and the scenery, never cutting so quickly that we can't follow the action.

Shaw Brothers movies almost always look fantastic--they're the studio behind Shawscope, after all, and The Chinese Boxer is no exception. The anamorphic lenses present wide vistas which are consistently visually engaging, alternating between the darker wood tones of building interiors and the snow-covered panoramas of nature, all of which are eventually painted with copious amounts of blood.

This film is a major influence on Tarantino's Kill Bill duology as well as the 1972 Bruce Lee vehicle Fist of Fury, and 88 Films provides a package that lives up to its legacy. The movie has been given a new HD restoration sourced from the original 35mm film negatives, and it looks simply gorgeous. Viewers have the choice between the original mono Mandarin audio track and the mono English dub (I chose Mandarin). A new audio commentary by journalist and author Samm Deighan is included, as is a new interview with journalist David West and an archival interview with Wong Chiang about his work for Shaw Brothers. The U.S. and Hong Kong trailers are also included as well. Finally, the limited edition first pressing of the Blu-ray contains a reversible art wrap and slipcover with new art by "Kung Fu Bob" O'Brien, a double-sided A3 foldout poster with O'Brien's new artwork as well as the original theatrical one-sheet, and a 24-page booklet featuring an essay on the film by Andrew Graves as well as numerous photos. This is part of the first wave of titles that British company 88 Films is also offering to a Region A audience. At the time of this writing, it's available on Amazon for around $20.

The Chinese Boxer is a visually stunning action spectacle that marks the arrival of Jimmy Wang Yu as a new superstar and is considered one of the unofficial beginnings of the kung fu cinema cycle that would dominate the Asian movie houses and U.S. grindhouses all throughout the decade. The home video presentation from 88 Films gets high marks all around, and if you only know Chinese splatter cinema from Kill Bill, this is a wonderful place to begin your kung fu journey.