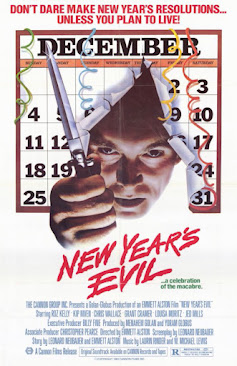 Quiet but so bright, my heartbeat swells, oh can't you tell I'm in a fever

It's New Year's Eve and Diane Sullivan (Roz Kelly, best remembered as Fonzie's girlfriend Pinky Tuscadero on Happy Days) is a popular rock DJ who is hosting a televised countdown party to ring in midnight for each of the country's four time zones. When a mysterious caller phones into the event and tells her that he's going to kill someone she knows every time the clock strikes twelve, she's shaken, but not yet convinced. Then the murders begin, and as midnight approaches in Los Angeles, she discovers that she's this hunter's ultimate prey. 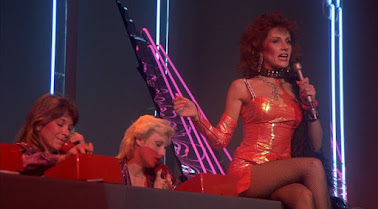 In the wake of 1978's Halloween, a spate of similar holiday-themed horror movies hit screens in an attempt to capitalize on John Carpenter's creation. Golan and Globus--two enterprising Israeli film producers who were expanding Roger Corman's exploitation playbook into ambitious blockbuster success--were quick to capitalize on any trend and the new slasher sub-genre was a prime target. Associate producer Christopher Pearce (Schizoid, X-Ray) was tasked with making this movie a reality and with director Emmett Alston (Nine Deaths of the Ninja) at the helm, shooting was completed on New Year's Evil in just 18 days. The entire production schedule was only three weeks long. 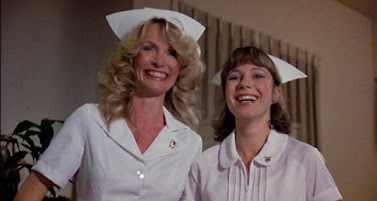 New Year's Evil is unremarkable, but that is not to say that it's unenjoyable. Slashers are my favorite horror sub-genre; they rarely require belief in the supernatural and ask almost nothing of the audience other than to sit back, relax, and enjoy the show. They're not unlike film noir in that they tend to be morality plays where people are punished for falling victim to their own human weaknesses. In the case of this movie, Diane Sullivan has spent too much time inside the fame machine and has prioritized work and celebrity status over family and friends. At the very beginning of the movie, her adult son begs her for her attention, but she's too busy. And the cat's in the cradle and the silver spoon...

The movie also does something fairly unusual for the slasher cycle, which is to reveal the killer almost immediately. Our murderer, played with menace by Kip Niven (Magnum Force, Earthquake), does wear a series of disguises and a mask for parts of the film, but we see his face from the beginning. But a face is not an identity, and finding out his motivation for slaughter is part of the story. 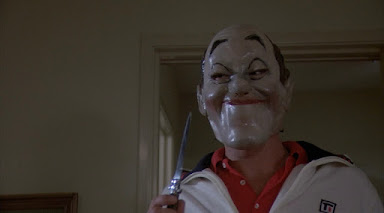 A huge part of the appeal of New Year's Evil is the fact that it is firmly grounded in the 1980 Los Angeles rock music scene where The Sunset Strip was quickly turning into the neon playground of androgynous vampires clad in makeup and leather. Much of the music is provided by a rock band called Shadow, a Seattle-based outfit that had formed in 1973. They play a strange mix of early glam metal and blues here, and the title song is performed no less than three times throughout the movie. Not coincidentally, The Cannon Group issued this title track as a 45rpm record single with another Shadow song from the movie, "Simon Bar Sinister" as the B-side, and this single was sent to radio stations across America in an attempt to make it a hit. Several more songs are contributed by a band called Made In Japan, and the film's closing credits promise that the full soundtrack is available on records and tapes, though it never actually made it to store shelves. Thankfully for those that can't get enough of the rock band Shadow, the title song was released digitally in 2020. 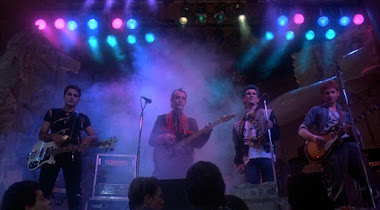 New Year's Evil was released on Blu-ray in 2015 by Scream Factory, but that pressing is now out of print. Code Red and Kino Lorber have rescued this film from the purgatory of inflated Ebay prices by releasing a beautiful edition that features a new 2K scan of the film, an audio commentary with the director and Code Red's Bill "Banana Man" Olsen, the 37-minute making-of featurette that was produced by Scream Factory, a reversible art wrap with the original artwork as well as new artwork by Vince Evans, plus a limited edition O-card that also features the new art. It's great to see such video-store-era staples being given this treatment and priced affordably ($17.97 as of this writing).

New Year's Evil is ultimately forgettable, but that's okay. There's something to be said for undemanding entertainment, and as a Happy Days fan, it's great to see tough New-Yorker Roz Kelly getting top billing here. By the end of 1983, the actress was out of the entertainment business (but not the headlines). The movie is enjoyable as a programmer, and at less than 90 minutes, it's fast-paced and to-the-point (pun intended). The setting serves as an interesting time capsule and its unique audio-visual charm makes this one a win for slasher fans.