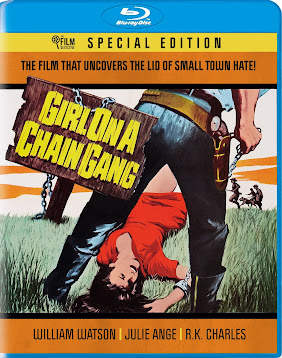 Exploitation maven Jerry Gross may be better remembered for the movies that he distributed than for the ones that he actually created. Notorious grindhouse staples such as I Spit on Your Grave, I Drink Your Blood, Fulci's Zombie, Penitentiary, The Black Godfather, and The Mafu Cage owe their reputations largely to Gross and his entrepreneurial efforts, but as a director, his output is much smaller and more obscure. Now, his first and arguably most unknown film, 1966's Girl on a Chain Gang, has been given wonderful new restoration by The Film Detective in collaboration with Something Weird Video.

Three young social rights activists (a white man, a white woman, and a black man) are driving through the south when a small town sheriff pulls the group over. It doesn't take long to realize that they're in the wrong place at the wrong time and that this good ol' boy lawman and his crooked cronies have no intention of letting them leave. They don't take too kindly to northern folk in those parts, ya see? What follows is 96 minutes of horrifying police corruption that abandons anything akin to subtlety as our protagonists find themselves in a battle for survival. 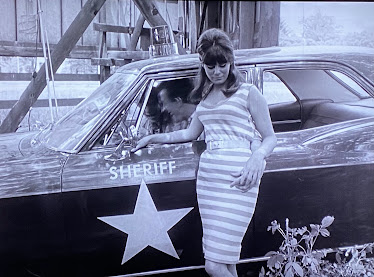 The crooked sheriff is played by William Watson in his debut. Watson would reprise this racist, sexist power-mad persona throughout much of his career, beginning just one year later with In the Heat of the Night and again in the television miniseries Roots. It's also the first film for Arlene Farber, Jean Rollins, Matt Reynolds, and Ron Segal; the latter three would only have one other screen credit, which came in Jerry Gross' next film, Teenage Mother. For some reason, the African American actor in this movie is uncredited and unknown. 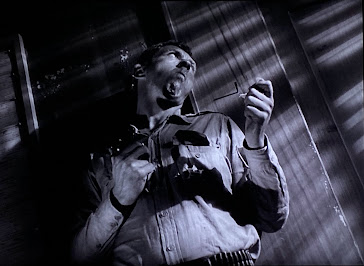 Comparisons to 1968's Night of the Living Dead are unavoidable. Like Romero's masterpiece, this is very low budget movie that's concerned with social issues like racism and injustice and that uses unconventional and exploitative elements to reach an audience. It's also a movie that was filmed in black and white in a time when color was the industry standard, allowing for a unique look and feel that benefits the overall tone of the movie. Unlike Night of the Living Dead, however, Girl on a Chain Gang is not a masterpiece. There are good things within it, such as the slimy performance from Watson (who always has something in his mouth: a cigar, a bottle, or food) and the ever-ratcheting tension as we continue to be surprised by what this movie is willing to put its characters through. But it's also perhaps a bit long for what it is. Worst of all, the chain gang that's promised in the title is barely an element in the film at all. 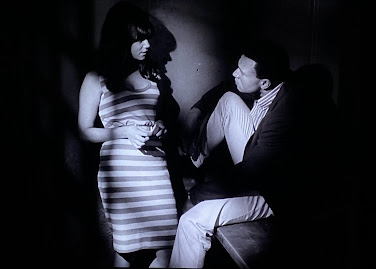 This movie is inspired by true historical events. Just two years earlier, Mississippi lawmen had pulled over a vehicle containing three civil rights activists (two white men and one black man) and held them on false charges. All three men soon disappeared and the eventual FBI investigation turned up piles of dead bodies secretly buried in the town. The local sheriff, his deputy, and a patrolman were held for trial in a murder case so famous that it not only inspired this movie, but also the 1988 Oscar-winning film Mississippi Burning. But this is grindhouse, not art house, and this movie is made to entertain, not educate. Corners have been cut: it was shot in Long Island, NY and some of the performances--like a judge near the end of the movie, who sounds like a Muppet--border on comedy. 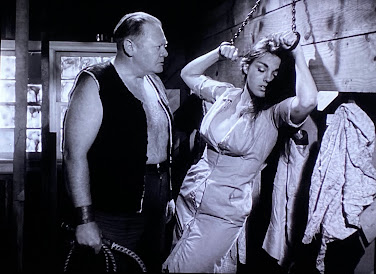 Now Girl on a Chain Gang has been given a fine restoration from The Film Detective and Something Weird Video. The new transfer provides a sharp picture with nice contrast, deep blacks, and visible film grain. Occasional scratches and wear to the print are visible, and there's a small segment near the end of the film that seems to be sourced from video tape (likely missing or too badly damaged from the source print) so that we have a complete presentation. As is their standard, The Film Detective has included a nice collection of supplements, starting with an audio commentary by author Jennifer Churchill and the new Ballyhoo documentary It's All in the Title: Exploiting Jerry Gross, which runs 13 minutes and recounts the controversial career and lonely death of the schlockmeister, as told by author and film historian Chris Poggiali. A 16-page essay titled Girl on a Chain Gang: Race, Rednecks and Civil Rights from Something Weird Video's owner Lisa Petrucci is also included and is a nice look at the movie and it's themes, as well as the career of Gross. Finally, the package contains something that I haven't seen listed anywhere: a paper "Certificate of Jury Service" that acknowledges that we have witnessed the trial of the victim in the film. Is this a replica from the original regional screenings of this movie? It sure feels like it. Either way, it's a nice touch, and totally unexpected. At a price of only $17.99, these Special Edition Blu-rays are a tremendous value when when compared to similar fare from other labels.

Whether or not this film sounds like a great night of entertainment or not, the movie is a fine collectible for exploitation fans who are eager to seek out the lesser-known entries in the career of Jerry Gross. As a giant in the sleaze and grindhouse scene, enthusiasts of egregious cinema know many of the films that he brought to screens, but they likely haven't seen this obscurity. As one of the tamest, dare I say more tasteful, films in the Gross catalog, genre movie enthusiasts will want to seek this rarity.