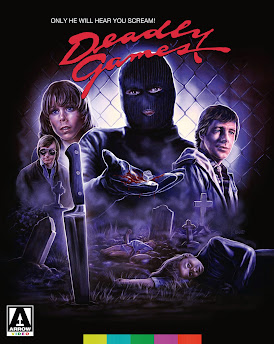 When is a slasher film more than just a slasher film? Such a question applies to 1982's Deadly Games, originally created under the title Who Fell Asleep. The overall tropes of the horror sub-genre are here: a masked killer who dresses all in black and who often murders his victims in creative and gruesome ways, a cast of attractive women/victims who have trouble keeping their clothes on, even a Final Girl that the audience can clearly champion as she faces off against her stalker.
But Deadly Games complicates things by introducing more mature elements that are harder to categorize, making this anything but routine. Instead of teenagers, we have an older cast of adults--some of whom are married. There's still sex and drama, but these issues play out in a very different way than slasher movies that deal primarily with young people who sneak away from the group for a quick tumble in the back of dad's Buick. The characters here are bored by a stagnant life in a a small town in which nothing ever seems to happen. The only social events that seems to exist here are the gossip sessions at the local diner or a trip to the local movie palace, which plays a steady string of monster movie classics. 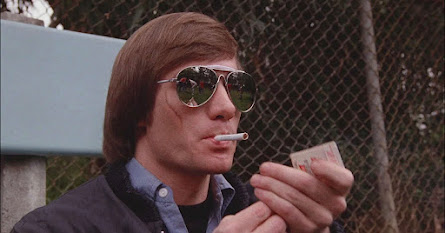 Our story begins with a murder. This is no surprise, but it's where the film goes from there that almost immediately deviates from traditional horror fare; those expecting another reheated version of Halloween are in for a challenge. Instead, the movie identifies two primary suspects almost immediately. Billy (Steve Railsback) runs the local theater, where he also lives. Roger (Sam Lane) is the local law enforcement. Billy and Roger share a bond that we soon discover was forged during their time in Vietnam. Billy has scars on the outside, while Roger carries his scars within. The two spend their free time in the old theater playing a monster-themed board game that directly connects to the murder victims. Our heroine Clarissa (Jo Ann Harris) arrives in town after her sister's slaying and falls madly in love with Roger, even though he's married. A significant portion of the movie's running time is devoted to their romance, complete with A.M. Gold music montages and love scenes by firelight. But is Clarissa sleeping with the enemy? In a town full of secrets, all is about to be revealed. 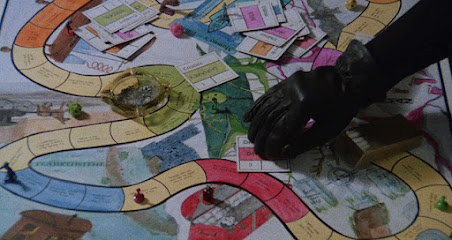 Full disclosure: I try to focus my reviews on my own perspective and avoid being reactionary to other opinions. Speaking to the criticisms of others gives those voices too much power and dilutes the potency of my own thesis. However, you don't have to look very hard to see that Deadly Games is not well-regarded among horror hounds. Some say it's boring, others say it's too sappy because of the love angle. I believe the many negative voices out there are completely missing the depth and craftsmanship of this film, perhaps trained by decades of cookie cutter chillers that demand almost nothing from us as an audience, and in turn deliver only the basics: blood, guts, and boobs, nothing more. Deadly Games is not a blood-soaked candy bar confection. It has a lot more going on and is not so easily dismissed. 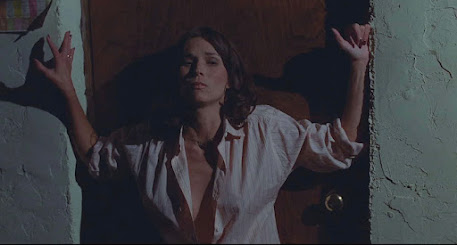 The movie looks at the depressing pointlessness of a certain kind of suburban life. Affairs, gossip, backstabbing, corruption, isolation, loneliness, empty marriages and empty beds...this is what some of the counselors of any given Friday the 13th movie may have had to look forward to if they'd actually survived their encounter with a certain Mr. Voorhees. After the college parties and the drinking sessions in the woods, this is the reality many of those characters were headed toward. The glory days are gone and now every day is Tuesday. The film also offers another strong, early look at the impact of the Vietnam War on those who came back from the jungles and tried to pick up the threads of their former lives, only to face PTSD from the trauma of their experience. Why does death stalk this town? The answer the movie seems to suggest is truly horrifying: there was just nothing else to do.
On the other hand, we must also consider that Scott Mansfield, the writer and producer of Deadly Games, wasn't happy with the finished product that we now see. He didn't get final edit, he didn't get to debut his movie with a wide theatrical release, and he had a laundry list of things he wished he could have changed. The version of the film that hit cable and home video forty years ago is not the version of the film that Mansfield wrote. Still, much of his complexity still manages to shine through. 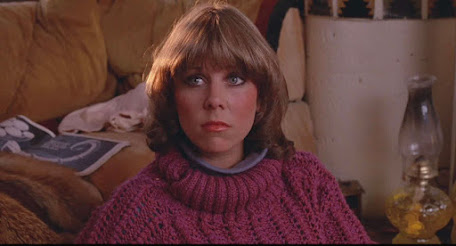 Now Deadly Games has been given a lavish new Blu-ray edition from Arrow Video complete with a new 2K restoration of the 35mm negative by the American Genre Film Archive. What was once a muddy, subpar visual experience is now a wonderfully-detailed and crisp cinematic presentation. As with other Arrow offerings, the special features not only add value, but actually help to tell the story of the film and how it was created. In a new interview that runs nearly half-an-hour, Jere Ray-Mansfield--costar in the film and the wife of writer/director Scott Mansfield--recounts her casting experience, meeting the director for the first time at the audition, and how the bad distribution experience with Deadly Games led her and her husband to create their own production company. The disc also features a lengthy interview with special effects and stunt coordinator John Eggett, who discusses how some of the kill scenes were achieved and regales the viewer with behind-the-scenes stories from the set. An audio commentary by The Hysteria Continues is also included.
My favorite extra from this new package is a wonderful, academic essay by Amanda Reyes that's included in the 24-page booklet. Reyes has already established herself as a powerful voice in genre film and television criticism, and her expertise in understanding and parsing the nuances of horror films is on full display in this writing, titled The Games People Play: Exploring the Midwestern Gothic in Deadly Games. Through each paragraph, Reyes cuts directly to the meanings and intentions that are layered into this film, speaking about complex character duality and the manifestations of pain in veterans, the emptiness of unfulfilled dreams, and yes, the games that people play with one another, which can sometimes be deadly. Reyes displays a firm understanding of character, motivation, and subtext; movies are not simply what we see on screen, they're also the implications that exist between those frames, which lead us to further explore the themes that lie beneath the surface. As I'm becoming increasingly fond of saying, whether a movie is "good" or "bad" seems to miss most of the conversation. Films aren't small things and box scores don't serve them well. I honestly can't say whether or not Deadly Games succeeds in its messages. I think some of them come through while others could have been better served. The board game aspect is cool, but doesn't get enough screen time. Are the themes of boredom, anger, and trauma too understated? Again, perhaps. This movie was made at a time when trends were shifting and the humanistic approach of the seventies was quickly giving way to the spectacle of the eighties. Maybe Deadly Games is ultimately guilty of being too subtle, cerebral, and exploratory for the average horror fan, while being too exploitative for the thinking man. But isn't that interesting? Are we having these conversations about the latest Halloween movie or the newest direct-to-streaming splatter fest? I'd rather champion a movie with big ideas that doesn't quite connect with an audience than an unchallenging color-by-numbers product that only exists to make money. In a sea of franchise properties, this movie exists all on its own. Thanks to a beautiful new restoration and wonderful bonus features, Deadly Games is getting a whole new opportunity to tell its story.
Amanda Reyes Arrow Video Deadly Games horror Jere Ray Jere Ray-Mansfield Jo Ann Harris Sam Lane slasher Steve Railsback The Eliminator Who Fell Asleep